Last week I said I missed Star Wars and TMNT comics. This week we got the return of Bounty Hunters, and a double-dose of TMNT. Where are you gonna find a more fair friggin’ deal than that?

This week’s new releases are pretty light. So I’m holding a few back from last week’s pull list. That Texas Blood is one of them. We might also see Marvels Snapshot: Captain America and/or Harley Quin: Black + White + Red. 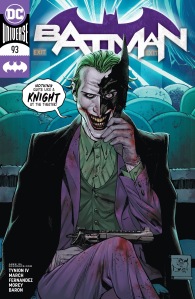 The Designer’s role in this story more or less wraps up in this issue. That’s a little sad, as I liked that character concept. Even if the costume was a little bit much.

Punchline, the Joker’s new answer to Harley Quinn, gets put over pretty strong here. They obviously want her to be a big deal. She’s got an interesting worldview, and it’s not as crazy as you might think. Her costume is definitely cosplay-friendly. Not quite as much as Harley, but expect to see her around the convention scene.

This issue has a strong hook. For yours truly, most of that has to do with our heroine, Bree Hale. We establish her as a small town girl-next-door type. But obviously she has a history that allows her to kick all kinds of ass and escape perilous situations. She’s particularly strong in the climactic sequence as she fights off a sadistic interrogator.

My understanding is this isn’t connected with the previous Dead Body Road mini at all, and that it’s an anthology book like Criminal. So you should be okay coming in cold.

There’s a big moment between Raph and Alopex in this issue that leads me to believe we’re headed toward fairly uncharted waters: Romantic interests for the Turtles.

And no, don’t talk about Mitsu in TMNT III. Please.

I’m game for really putting the Teenage in Teenage Mutant Ninja Turtles. Especially now that they’re doing this Mutant Town story. Between the Raph/Alopex scene and the concert setting, this issue really does that well. They’ve got a chance to break some new ground here. Let’s hope they take it.

I can’t get over how much Braham Revel’s style reminds me of the 2012 Nickelodeon show.

It’s amazing to think how virtually everything The Next Mutation did wrong with Venus di Milo, IDW has done right with Jennika. Although based on how the IDWverse has been put together, we might actually see Venus in the comics at some point.

Bebop and Rocksteady show up here. Why does Rocksteady carry an average-sized sledgehammer? It feels like it should be bigger. Mutant-sized. That, or a giant blaster like on the old cartoon.

Ryan Parrott does Rocky, Adam, and Aisha a lot of justice in these books. That’s one of those things that’s expected, but still really nice when you actually see it. Rocky is also sans mullet, which I appreciate.

“Necessary Evil” might have gone a little long. But it was still a story very much worth telling. Well executed too, in terms of both the writing and the visuals.

Definitely a worthy issue #50. And if the cliffhanger at the end is any indication, PR fans are going to want to come back for issue #51.

The humor in this issue is on-point. Especially with Batman doing a guest shot. That’s a high compliment coming from me, as I don’t usually get into Harley-Quinn-style comedy.

We’re teased with a separation of Harley and Deadshot from all the various new characters in the group. That would be interesting, though I expect ultimately a bad move for sales. I’d stick around, though. Again, a pretty high compliment from yours truly.

Boba Fett is teased for this issue, but doesn’t show. I’m curious as to how much of him we’ll need to see to keep this series afloat as the months go by. That’s not to say characters like Bossk and Valance aren’t appealing. But Boba’s drawing power is obvious at this point. You could easily make the argument for doing a Boba Fett series, much like the Darth Vader one.

I grow a little weary of the story they’re telling about all these hunters having a common target. The target in question simply isn’t that interesting. Not yet, at least.