Ahhhh yes. Action and Detective are back. Now it really does feel like comics have returned.

I find it funny that on this week’s Action Comics cover (shown below) and several recent Superman covers, they’ve felt the need to tell us about Entertainment Weekly naming Superman the “Superhero of the Year.”

In case you’ve been trapped in a Fortress of Solitude since birth, Superman was the original comic book superhero and is an American icon whose legend has inspired millions. How many more issues could “Superhero of the Year” possibly be selling?

I love DC, and I love these characters. But it reeks of desperation. “Look at us! Entertainment Weekly knows who we are!”

There’s a 9/11 reference in this issue. That’s really surreal considering The New Batman Adventures was on the air in the late ’90s.

We get something here that ties back to the first issue, which is kinda cool.

Is Deathstroke British in the DCAU? Some of his lines in this book sound like they should be coming from Alfred. Or perhaps a friend/relative of Alfred’s.

The last panel leaves some doubt as to whose side Jason Todd will be on when the chips are down. That’s definitely a tweak to what they did in Under the Hood.

This is the best issue of Action Comics in awhile, and not just because it’s the first one in awhile. We’re finally diving into who Conner Kent is and how he returned, so there’s a lot of intrigue here.

When it comes to how he’s drawn the past several issues, I’ve been pretty hard on John Romita Jr. Specifically, his figure rendering is positively jarring at times. But he’s on his best behavior here. I’m not sure if that has to do with all the additional lead-in time involved with the pandemic. But I ain’t complainin’.

Good issue. Very accessible. We reference a lot of recent event comics, but with editor’s notes so readers can follow along. Williamson also provides some good exposition for Atomic Skull, who obviously meets a tragic end. Our villain doesn’t get the same treatment, but hopefully that comes next issue.

Clayton Henry’s art is clean, but avoids that over-the-top spotless look you sometimes see for artists going for that look. My only critique would be, oddly enough, the shape of Superman’s head on the cover. Something looks off…

I wouldn’t call Shazam! #12 a page-turner. But it is a fun team-up issue. Jeff Loveness, who’s worked on Rick and Morty, Jimmy Kimmel Live!, and has also worked on Spider-Man and Groot over at Marvel, injects a lot of charm into the Big Red Cheese. Especially when it’s time for Billy Batson’s scenes with Freddy Freeman.

To the best of my recollection, this is my first exposure to Brandon Peterson. It’s a very solid outing for him. His work is nice and clean. Of course, Michael Atiyeh helps him out a lot with great coloring. 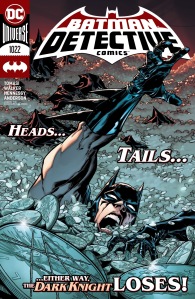 The early part of this issue is structured quite like the second part of a Batman ’66 story. You know, where they escape whatever death trap they were put in last time, and then sometimes fight off a bunch of henchmen? In this case, they’re literally named Vice and Versa.

We also build for Joker War in this book, and if I’m reading this right, it’s suggested that the events of that story were actually the second part of Joker’s plan from Death of the Family. Tomasi was also involves in that story via the Batman & Robin ongoing. Interesting…