God damn it’s great to have them back. 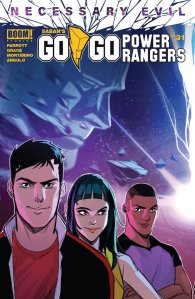 A new zord formation, the “White Tiger Mechazord” (NOT Megazord), makes its debut in this issue. That’s kinda cool. This series is just about done, but it’s still cranking out new things.

On the downside, this issue also shows us Jason, Zack, and Trini flat out lying to Zordon about the peace conference in Switzerland. They’re not even lying well. They come off like grade schoolers lying about why they don’t have their homework done.

“Uh….I went to a peace conference. In Switzerland!”

Be VERY careful about your feelings for somebody. I’ll only half in jest say that’s the big message I took away from Dead Day #1, our second Ryan Parrott offering of the week.

Dead Day presents us with a world in which the dead come back as what I gather are zombies that can think and speak…? It’s still a little unclear. Either way, you’ve got that trusty plot point of main characters endangering themselves over a former or potential love interest.

My only complaint is that the figure drawing is a little off. Hopefully that tightens up with time.

They’re doing something to break up the usual “captives with brain bombs” formula, which I’m pleased with. This Taylor/Redondo/Lucas team has done a great job keeping me engaged. With new characters, nonetheless.

What’s more, it looks like we’re about to start integrating heroes like Batman and the Flash. Given Taylor’s approach to Suicide Squad, that offers a lot of intrigue.

Redondo’s style is fairly straightforward, though it still has a nice kinetic energy. In that respect, it certainly doesn’t hurt that we focus on a speedster for most of this issue. But my point stands.

Basically what we have here is a horror movie where the monster is an entire planet. Our heroes, naturally, are trapped on world.

Rogue Planet #1 is…okay. The story is okay. The art is okay. Nothing too remarkable. But nothing offensive. Nothing yet, at least. It’s one of those books that’s just kinda there. As such, I’ll pick up issue #2 if I can afford it. But I’m not sure there’s room in my stack for a book I know is strictly okay.

Holy crap. This issue got dark.

Or perhaps “mature” is the right word. It zooms in on the teen angst stuff, which I liked. But then Sam and our little alien friend tackle…well, look at the cover and you can probably guess. It’s fine. There’s nothing offensive or wrong about it. But tonally it seems like a swerve turn.

How bad is it that with the world in the shape it’s in today, I found myself relating to the teen character griping about society on his YouTube channel?