By Rob Siebert
Calls it Soda. Not Pop.

The other day I said I wanted to feature the X-Men a little more. So this week I tossed in X-Men #1 from back in November. Along with DC’s digital-first stuff, of course. 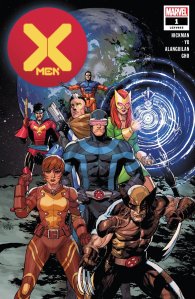 Jonathan Hickman intimidates me. He tends to go a little too far out of this world, and I get lost.

Thankfully, X-Men #1 is relatively straightforward. Mutants have established their own nation on the island of Krakoa. And of course, there’s a group of humans that don’t like mutants that are trying to destroy them.

Had do to a Marvel Wiki search on Cyclops to see how the hell he could be leading the team again. He’s a more interesting character than most casual fans give him credit for.

Clayton Henry’s style, let’s call it moderately cartoony, is a perfect fit for Flash. When Barry’s zipping around in the costume, Henry stretches his body just a bit for effect. But at the same time, all the scenes about his civilian life have the weight they need. He can exaggerate, but he doesn’t overdo it.

Once again Simone gives us a scene that’s unintentionally poignant given the times, as Flash saves a pair of kids whose mom is a nurse.

Cool time-travel shenanigans make this the highlight of DC’s digital releases this week. (Or at least the ones here.)

Aquaman vs. Russian Mobsters? Not a pairing I expected, I’ll give you that. But it works.

The Sea Devils make an appearance in this issue. If you have no idea who they are, I was right there with you. Somehow they’re in one of the few corners of the DCU I haven’t explored yet.

Not an amazing issue from a story perspective. But mad respect to Aaron Lopresti, who’s low key one of my favorites, for drawing fish deformed by poison dumped into the sea. Legit creepy. 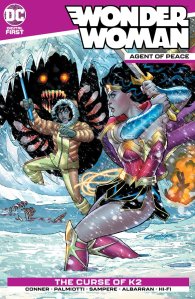 So here we have Diana in another team-up issue, this time with Lois Lane. I’m curious if this is just a coincidence, of if they wanted to throw another big name character in there to help support her. With the Gal Gadot movie under her belt, and another one coming out in the near future, I’m not sure Wondie needs it right now.

We get a really nice fight sequence between her and what basically amounts to a demonic abominable snowman who spouts textbook supervillain speak. (“Give up impudent morsel! Death awaits!”) Steve Orlando gets Wonder Woman and knows how to write her. But from a story perspective, I haven’t been overly impressed by these last two outings.

Pretty standard Batman stuff here. It’s not bad, but it’s not overly remarkable either. Crime involving an old theater, theater lead traces back to…well, you can probably guess based on the cover.

My favorite line in this issue: “Who was it that said every villain is the hero of their own story? Probably a villain.”

Another great issue from Venditti, Pelletier, and the crew as our Man of Steel faces off against a new villain called the Gambler.

In addition to a great “shirt opening” sequence, this issue contains a panel reminiscent of a famous Alex Ross painting where Superman is sitting in a chair with his shoulders slumped a bit. Like he can feel the weight of the world on his shoulders. Only in this issue, he’s holding what looks like a beer bottle. It’s soda, of course. I love that.

He’s got a few great one-liners too. “Don’t bet on it, Gambler!”