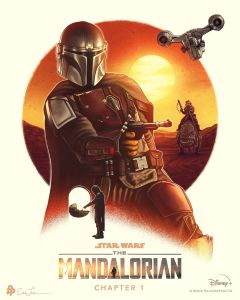 Y’know what the world needs right now? Well, a lot of things. But you know what would be really nice? More of The Mandalorian. That’s part of what drew me to this poster by Chelsea Lowe.

One of the things that made the show stand out the way it did was its devotion to that Spaghetti Western aesthetic. The same aesthetic that served as an influence to George Lucas in the development of the original Star Wars. Case in point? Han Solo. Heck, the Mos Eisley Cantina scene as a whole.

This piece brings to evokes promotional posters for films like Pale Rider, The Outlaw Josie Wales, and The Good, the Bad, and the Ugly. Lowe perfectly captures the feel of The Mandalorian.