We’re strictly looking at Marvel and DC this week, as that’s just how things shook out. Seems like a catch-up edition of “Weekly Comic 100s” is in order sooner than later…

Incidentally, Wolverine #1 was February’s top-selling comic. And no, I still won’t be reading or reviewing it.

Covers don’t usually play a big part in whether I’ll try a new series, or an issue I otherwise wouldn’t be inclined to pick up. But if ever one could, it’s this one. Epic work by Lee Bermejo.

I’d call this a strictly okay start. The success of this series is largely riding on how the Vance character comes off as these early issues are buoyed by classic characters like Boba Fett and Bossk. He’s got a kind of Terminator-like appearance, and a mysterious backstory that piques my curiosity.

This mini ends exactly how you think it will. Some questions we now have answers to. Some we don’t. But we did get a really nice character moment that illustrates a really interesting, though in hindsight obvious parallel between Kylo Ren and Luke.

During a fight with one of Luke’s other Jedi pupils, Ben says that neither Luke and Snoke see him as a person. “I’m just a…legacy. Just a set of expectations.” From a certain point of view (wink wink), that’s exactly what Luke talks to Rey about in The Last Jedi. The burden of his bloodline. 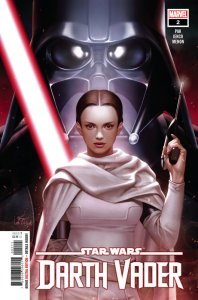 In this issue, we supposedly meet a surviving Padme. Funny thing is, the character looks older in the interior art than Natalie Portman does in real life.

Later on, Vader tells someone that if she’d lived, Padme would have joined the Empire. I wonder if he means the Empire that would have existed had he overthrown Palpatine, or the Empire that actually came to pass. I can’t bring myself to believe that he believes the latter. Unless he’s deluded himself that much over the course of two decades. 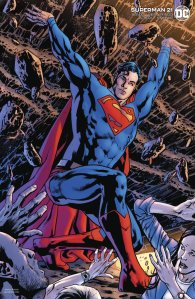 What I’m really liking about this “Truth” story is it illuminates the larger scope of what it means to be Superman. He’s not just some guy flying around in a cape punching things. The United Planets plotline emphasizes something that certain people never seem to understand. Superman is an idealist. Peace. Justice. Unity. Teamwork. Courage. These are the things he really stands for, and I love that Bendis gets that.

I’m wondering what the deal is with all these alleged new members. Are we doing a Justice League Unlimited type thing, where characters rotate in and out depending on the mission? Either way, it’s great to see Jackson Hyde back.

Bendis’ old Powers colleague Michael Avon Oeming handles some of the art here. The work he does here is fine. But if he’s going to be on the book, I’d prefer he be the sole artist.

Well hey there, Phil Noto. Always good to see you.

Here we have the X-Men once again shamelessly tampering with the space time continuum as a younger Nathan Summers lives with present-day mutants on Krakoa.

Outside of a sparring session with Wolverine during the opening pages, and Noto’s art in general this issue didn’t do much for me. There’s something of a novelty in seeing this character in a jungle atmosphere he’s not normally associated with. But in the end, not much to write home about. Not yet at least. 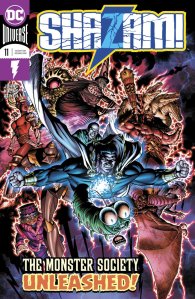 Alright, let’s talk about it: Superboy-Prime is back. His next target? Shazam.

If it were somebody other than Geoff Johns writing this book, I’d be a little apprehensive. But because it’s him, I’m actually looking forward to their big showdown.

Superboy-Prime is pretty much the anti-Shazam. Billy Batson is a young man given great power who ultimately uses it for good. This version of Superboy? A young man whose power made him spoiled, bitter, and angry. These two have more in common than they’d ever admit.