This damn thing cost $7.99. I’ve been following this main TMNT series since the beginning. But damn. That hurts.

But devil’s advocate: They jam a lot in here. Dozens of heroes and villains battle, with the fate of New York City at stake. Not to mention the lives of various mutants, and even children.

It all culminates in…well, I can’t say I knew for sure they were going in this direction. But after issue #50, I had a pretty good feeling a certain character would be on his way back by now.

Again, no Kylo Ren in this issue. Not even a closing shot of him in the last few pages. Lame. Sauce.

On the way to The Rise of Skywalker, Allegiance basically tells us two things: What the Resistance has been doing since the Battle of Crait, and how they obtained some of the resources they’ll undoubtedly have in the movie. It’s not the most fun Star Wars book you’ll ever read, and I doubt it’ll hold up to repeat readings. But as a little appetizer for the release of Episode IX, it works fine. 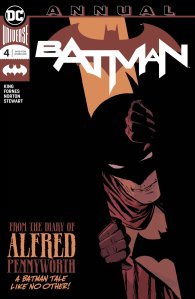 This issue quick-fires a bunch of mini-stories at us, narrated via Alfred’s journal. “Everyday” moves day by day from April 7 to April 24.

I’d like to think these are a bunch of cooky ideas Tom King had while brainstorming for his Batman run, but couldn’t squeeze in. Based on what we’ve seen, some of these ideas really feel like his. Batman fights a dragon, takes on an MMA fighter for charity, solves a whodunnit, etc.

Mike Norton tags in for Jorge Fornes for several pages. So we got from a David Mazzuchelli, Year One-ish look to something more akin to Michael Lark.