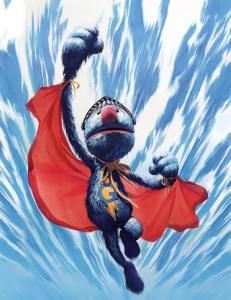 Spotlighting Alex Ross for “Astonishing Art” is almost cheating. He’s one of the rare few that’s in a category all by himself. I could put virtually anything in this space. It also doesn’t hurt that I’m obsessed with his YouTube channel lately.

But this piece holds a pretty special place in my heart. The man who gave life to Marvels and Kingdom Come, paints Super Grover with as much grandeur as he would any other heroic character. Yet it somehow maintains that level of cuteness that you’d want to see from a Sesame Street character. C’mon! Look at his little feet!

Not only can I easily associate this with my childhood, but it also takes me back to my first comic book convention. It was Wizard World Chicago in the spring of 2006. Palisades Toys had come out with a highly detailed Super Grover action figure the previous fall. I hadn’t expected to see it there. But low and behold, I happened to walk right up to one. To this day, it’s one of my most prized action figures. The little guy regularly rubs shoulders with the Justice League.