So as we continue to work our way through Shattered Grid, I’d like to highlight the fact that these are in (mostly) chronological order. We’re going through these moments in the order we read them. We’re certainly not ranking them in any way.

Why Jason and Lauren? Eh, why not? It makes a kind of sense, as they both know the pressures of leading a team of Rangers. But part of its appeal is in just how out of left field it is. After all, when you’ve got a bunch of hormonal teenagers in the same space for a lengthy amount of time, this kind of thing is bound to happen, isn’t it?

Like the evil Green Ranger before her, the Ranger Slayer, under a spell cast by Lord Drakkon, invades the Command Center. But while Tommy simply incapacitated Alpha 5, this version of Kimberly has a more…physical approach. 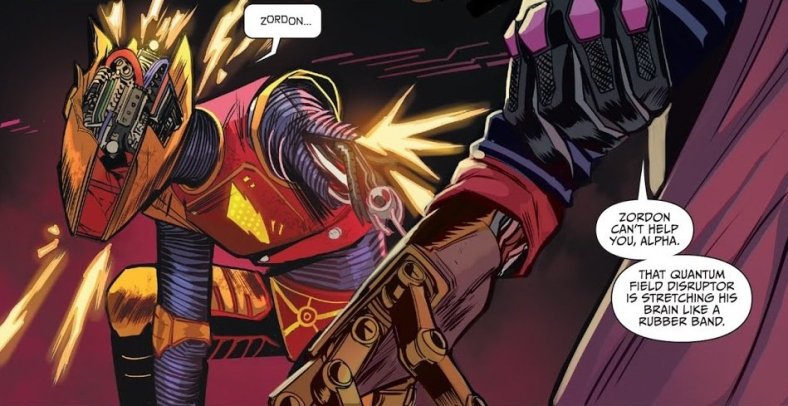 We certainly never saw Alpha take a beating like this on the old show, and for good reason. Seeing our robot buddy beaten up like this would have scarred most of us for life…

13. Zack talks to himself (MMPR #28)
Way back in MMPR #5, Kyle Higgins established that before Rita chose Tommy to be the Green Ranger, she tried to tempt Zack into the role. While he obviously refused, Zack never tell his teammates about Rita’s offer. Until he does, at the encouragement of his counterpart from Lord Drakkon’s timeline. Issue #28 gives us a nice little callback to that.

By and large, I maintain that the BOOMverse’s take on Zack is too moody and broody. But the idea of him being Rita’s original pick for the Green Ranger remains a really interesting idea. 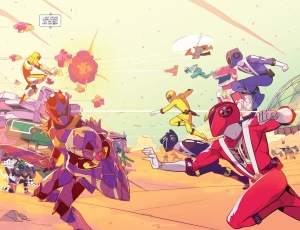 14. Bringing Down the Dome (MMPR #28)
Over in the world of Power Rangers RPM, Dr. K is quick to answer Zordon’s call to action from issue #27, as she’s developed technology that can fend off some of Lord Drakkon’s arsenal. But the domed city of Corinth has been fending off his attacks for hours. Jason and Lauren are sent in to help (see above), but Drakkon has reinforcements of his own.

What follows is a battle filled with characters and zords from across the franchise’s history. It’s so expansive that it’s truly a shame it all has to be condensed into one issue. Still, we get a hell of an exclamation point in the end, as Dr. K and Jason have to bring down the dome protecting Corinth. 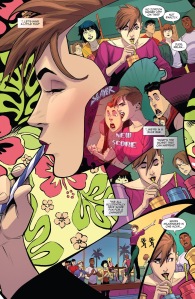 Once the Ranger Slayer comes to her senses, she aligns herself with our heroes. They wind up taking her to the juice bar, sitting her right next to her past self. And of course, no one recognizes that there are two Kimberly Harts in the room.

Still, it’s interesting to not only see future Kim getting to re-live her past, but watching her tell present-day Kim to enjoy it all while it lasts. And kudos to Dan Mora for drawing future Kim on the balance beam (shown left). That’s something we saw quite a bit of on the show. But we’re obviously seeing it from a whole new perspective here.