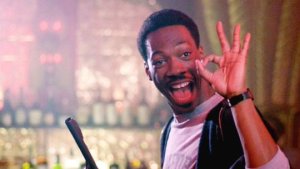 The Eddie Murphy/Ghostbusters connection goes back a long way. The irony there is that most people have no idea there’s a connection at all.

Legend has it that while writing early treatments for Ghostbusters, Dan Aykroyd had his eye on Murphy for a co-starring role. This would have been during Murphy’s days on Saturday Night Live. But as the film evolved, and Harold Ramis, Ivan Reitman, and Bill Murray became involved, the idea of Murphy playing a role fell to the wayside.

Some believe Murphy had been pegged for the Winston Zeddemore role, i.e. the everyman who gets to asks the Ghostbusters expository questions. A quote from Harold Ramis is cited in Ghostbusters: The Ultimate Visual History, which ultimately debunks this idea…

“Everyone thought that Winston was written for Eddie Murphy, but Eddie was really only going to costar with Danny is in his original version of the story. I never spoke to Eddie about being in the film.”

Decades later, Dan Schoening would pay a subtle tribute to Murphy in Ghostbusters #2. 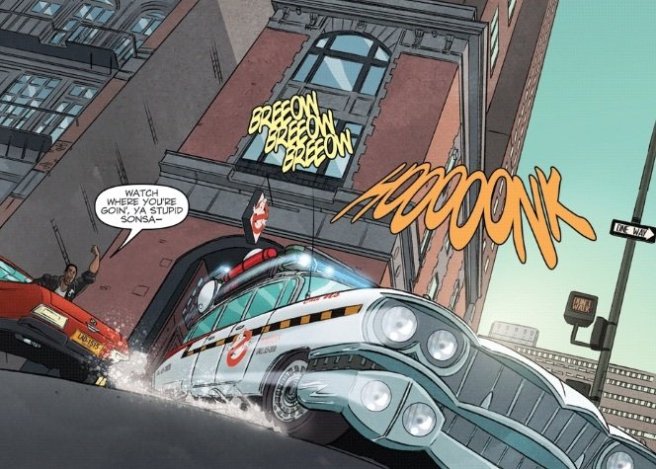 As Ecto-1 does one of its trademark zooms out of the firehouse, it nearly clips Axel Foley, Murphy’s character in Beverly Hills Cop. Foley is conspicuous by his trademark black jacket and muscle car.

Fittingly, both Ghostbusters and Beverly Hills Cop were released in 1984. Both made big bucks, and spawned franchises. *sigh* Sure makes you miss the ’80s, doesn’t it?