When you hear the name Brian Bolland, especially in the context of Batman’s world, you think of The Killing Joke. That’s understandable. Nearly 30 years later, DC still goes to great lengths to make sure none of us forget it.

But Bolland has revisited the Dark Knight at various points since, usually via cover work. Such was the case in late 1999/2000, when DC called on him to do the covers for their new Batman series, Gotham Knights. Between April of 2000 and January of 2004, almost every issue of Gotham Knights was adorned with a Brian Bolland cover. Thus, Bolland got to cover a lot of ground he likely wouldn’t have otherwise been able to. We saw him draw characters like Nightwing, Huntress, Spoiler, and even Cassandra Cain as Batgirl. While Gotham Knights was essentially a third string series, during that timeframe is boasted some of the best covers in all of comics.

While great many of them would most certainly fit into the “epic” category, I’ve picked my five favorites for this space today.

Issue #18 – Aquaman and the Giant Penny.

Brian Bolland is widely known as the man who drew Barbara Gordon getting shot and paralyzed by the Joker. So when one thinks of his art, the word “funny” doesn’t often come to mind. And yet, here we are.

Gotham Knights #18 is about Batman summoning Aquaman for help retrieving some Batcave artifacts that went underwater after the big earthquake in Cataclysm. Bolland uses this premise to to get a little cutesy with iconic Batcave set piece. Aquaman is a character that gets played for laughs a lot. But what I appreciate about this piece is that it’s not necessarily making fun of Arthur, or using the whole “he talks to fish” bit. Arthur is in on the joke. Bolland doesn’t draw him in a cartoony way, but the combination of the shrug and the expression on his face almost evokes a Looney Tunes vibe. It’s difficult not to smile when you see this thing.

Most people associated those bladed gauntlets with Batman, and that iconography is what makes this image work.

Gotham Knights #25 tied in with the Bruce Wayne, Murderer? storyline going on at the time, which saw Bruce go to prison. Bolland captured the spirit of that story perfectly by placing Batman in handcuffs. And don’t discount the iconic symbolism of those either. For better or worse, handcuffs are a symbol of American justice. With this relatively tight image, Bolland tells us that Batman is now entrapped within the system he’s supposed to be serving.

I wouldn’t call this a famous image. But it’s gotten a decent amount of additional exposure over the years. It’s easy to see why.

While issue #25 took place as the Murderer? storyline was beginning, Gotham Knights #32 was part of the wrap up. It showed us 24 hours in the life of Bruce Wayne/Batman. So it’s fitting that Bolland’s cover show is the grandfather clock, the entrance to the Batcave. The unofficial threshold between billionaire playboy and caped crusader. And you have the great juxtaposition of both identities standing back to back. An awesome cover for an awesome issue.

Another piece that got a good amount of play after the fact. Bolland delivers an epic tip-of-the-hat to the classic Carmine Infantino cover for Detective Comics #359 from 1967, Batgirl/Barbara Gordon’s “million dollar debut!” The classic never dies, kids.

There’s a sentimental aspect to this one, of course. Bolland wasn’t very nice to Barbara Gordon in The Killing Joke. So for him to render here like this, in her crowning moment, is pretty cool. It’s almost a sense of justice for the character. Though ironically, the issue was more about Jason Todd than Barbara herself. 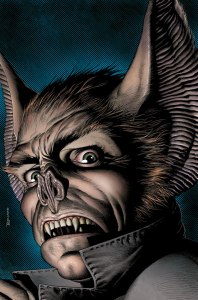 Oddly enough, I remember not liking this one when it came out. It’s so damn gruesome and detailed. Look at the nose. The ears. The fangs.

But of course, that’s the point, isn’t it? There aren’t a lot of epic Man-Bat covers. But this one definitely fits the bill.

This one also has a great Universal monster movie vibe to it. Between the lighting from below, the positioning of the head and neck and the wide-eyed expression, it brings to mind the promotional art for the original Wolfman or Mummy movies.