***In ”The Fanboy’s Closet,” I pull a geeky item of clothing from the closet, snap a pic, and then see what subjects it takes us into. Why? Why the hell not?!?*** 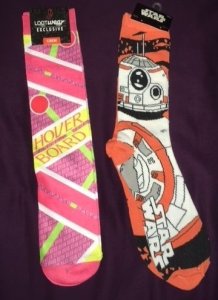 More socks this week. I’ve got a lot of socks, folks. You’re going to see a lot of them.

My sister-in-law got me a Loot Wear subscription this past Christmas. So I’ve been getting two pairs of geeky character socks in the mail once a month. Most of them are pretty cool one way or the other. But this photo is from the month they really landed in my wheelhouse. On the left you have the Hoverboard design from Back to the Future Part II. And of course, on the right you have BB-8 of Star Wars fame.

I spent the first few days of 2015 extremely annoyed at all the Back to the Future memes that were popping up. Most of them (at least the ones in my feeds) were pictures of the future sequence from Part II, with text that said something to the effect of, “It’s 2015. Why don’t things look this way???”

It’s one thing to hear an extremely obvious, low-hanging fruit of a joke. It’s another thing entirely to be bombarded with it over and over. If you want me to hate something, shove it down my throat over and over. Call it the John Cena/Roman Reigns effect.

Mrs. Primary Ignition bought me The Last Jedi on DVD a couple of weeks ago, and a few days ago we finally watched it together. While the movie has a fair share of problems (in case you hadn’t heard the legions who complained about it), a second viewing left me feeling a little warmer toward it. In contrast, my view of Rogue One hasn’t shifted at all. It remains the only Star Wars movie I knew I disliked as I was leaving the theater.

I’m cautiously optimistic about Solo: A Star Wars Story. Unlike Rogue One, at least I know that movie actually has characters in it. Characters I care about.