Historically, Smackdown doesn’t always fare well in these drafts. It’s no secret that Raw is Vince McMahon’s baby, and he’s willing to keep it healthy at the expense of its sister show. Last year was a textbook example. While Kevin Owens, Charlotte Flair, and Sami Zayn were stellar additions to the show, Smackdown also lost Dean Ambrose, the Miz, Alexa Bliss, and Bray Wyatt.

Plus, like him or not, Jinder Mahal winning the WWE Championship only served to make Smackdown look like the B-show people already perceive it as.At first glance, it looks like the blue team did pretty well this year. Once upon a time, Smackdown had a reputation as “the wrestling show,” as opposed to the more entertainment and story-oriented Raw. As you’ll see, it may now be in a position to earn that title all over again.

I had a feeling this might happen. Especially after Jeff won the US Title on Raw. This is good news, though. If Jeff can stay clean, the smart bet is he’ll make magic on Smackdown once again.

I had pitched sending Deville to Smackdown by herself. But in truth, she’s probably not ready to be on her own yet. Ditto for Mandy Rose. I’d like to see them work heel against Paige, the babyface general manager. That way they’d get to develop a bit more.

Either way, what happened with Deville and Ronda Rousey on Raw proved my point about her ten-fold. She needed to get the hell out of there.

Now THIS is a move. One that could very well change the direction of Joe’s career. 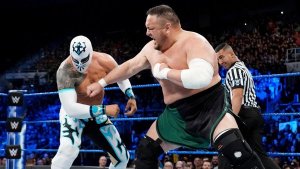 Here’s the thing about Raw in the last year or so: If you’re a babyface, you’re living in the shadow of Roman Reigns. If you’re a heel, it’s Brock Lesnar’s shadow. Those are Vince’s two main guys right now. But Smackdown? Smackdown is seemingly anybody’s ball game. That whole “Land of Opportunity” line has some truth to it. And on this show, with this group of guys, all Joe needs is an opportunity. He’s got plenty of experience stealing the show with the likes of AJ Styles, Shinsuke Nakamura, and Daniel Bryan. There’s no reason to think he won’t do the same here. What’s more, he’s become one of the best and most consistent promos they have. If the cards fall the right way, 2018 could be the year Samoa Joe becomes a top guy in WWE.

Full disclosure: I’m not as familiar with SAnitY as I probably should be. Eric Young has been around forever, of course. I’ve seen some awesome stuff from Kililan Dane. But I know next to nothing about Alexander Wolfe. Still, I’m very curious to see what these guys bring to the Smackdown Tag Team Division. There’s a lot of intrigue in putting them against the New Day, and I’m very curious to see how they match up against the Bludgeon Brothers.

Conspicuous by her absence is Nikki Cross, the female component of SAnitY. I’m not sure why they’d leave her out, unless they have something specific in mind for her down in NXT. A disappointment for sure. But let’s see what she does next… 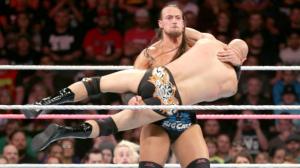 This is it. As a solo, this is sink or swim time for Big Cass. He and Enzo obviously weren’t a team anymore when he was injured. But they were still working together. Now he’s completely on his own. Still, he couldn’t have asked for a better babyface to work against than Daniel Bryan. That’s not a feud anybody really wanted to see, but it’s the one we’re getting. So let the Big Cass experiment officially continue.

In hindsight, this one is obvious. Asuka and Charlotte Flair stole the show at Wrestlemania. So there’s tremendous appeal in seeing them lock up again. Especially if the winner gets a shot at Carmella’s newly won Women’s Championship. Asuka has a broken streak to avenge. Now we can see her do it.

I also think an Asuka/Carmella match would be hilarious, just because of Carmella’s fearful screaming during the match. Those two characters could be a lot of fun together.

The story here isn’t Gallows and Anderson coming to Smackdown. It’s that Finn Balor didn’t come with them. Balor would have benefited from a fresh start every bit as much as Samoa Joe. Even worse, taking the Club away from him kills a huge portion of his invaluable cool factor.

This one surprised me. I had these guys pegged as staying on Raw. I certainly won’t complain, though. While I’d never want to dismiss Sheamus, we now have Cesaro on a roster that also includes AJ Styles, Shinsuke Nakamura, Daniel Bryan, Samoa Joe, and Jeff Hardy. Think of the possibilities.

Also, I imagine this means Matt Hardy and Bray Wyatt are walking out of The Greatest Royal Rumble with the Raw Tag Team Titles. Can’t say I expected that. I thought they’d simply put them back on the Bar. But now, Sheamus and Cesaro can expand their resume to include the Smackdown Tag Team Titles.

How fitting that Truth was in a segment with Tye Dillinger. Because like Dillinger, he’s on Smackdown to be a background player.

I will say this, though: The man looks damn good for 46.

As with SAnitY, I know very little about Andrade “Cien” Almas, outside of the fact that he just lost the NXT Championship to Aleister Black. But from what I understand, this pairing with Zelina Vega really turned his career around. So I’m anxious to see what these two are about. If they catch on, it wouldn’t surprise me to see Almas gunning for the US Title before long.