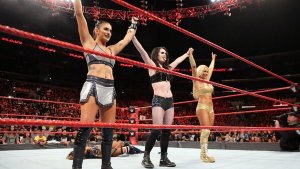 So there’s a rumor going around that Vince McMahon originally wanted to refer to Paige’s faction with Mandy Rose and Sonya Deville as “PMS.”

Get it? Paige, Mandy, and Sonya? I don’t know if I buy it, considering how ridiculously sanitized everything on WWE television is today. But on paper, that’s about as much a Vince McMahon idea as you’ll ever find. Remember, this is the same guy who brought us the infamous Dr. Heiney sketch. Supposedly the idea was nixed once Stephanie McMahon caught wind of it.

And yes, I remember Terri Runnels and Jacqueline being called PMS in the late ’90s. I’m trying to forget that one, actually…

Though to be honest, I might have preferred the name PMS to what we got. Absolution? That’s got no kick to it. No zest, no flavor. What exactly is Paige being absolved for? The leaked footage? The Del Rio stuff? Probably not. WWE might brush across that on a network special, but I don’t imagine they’d go near it on a national level. So what gives?

Kevin Owens and Sami Zayn open the show. Randy Orton surprises Owens with an RKO. Shane McMahon announces Zayn vs Orton in the main event, with Owens handcuffed to a ring rope. Over the years, I’ve seen so many of these opening promo segments where the authority figure winds out coming out and making a match. They’re paint by numbers at this point. But I loved this one. Heel Sami Zayn is a damn riot. He’s beautifully smug and irritating. “You only boo ’cause you know it’s true.” Classic. 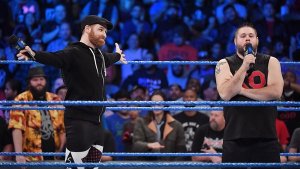 Owens and Zayn had a decent script here too. We got some good stuff about Randy Orton doing dirty work for the McMahons over the years, and getting more opportunities than anyone else. If you didn’t know better, you’d think Owens and Zayn were the babyfaces in all of this.

On top of everything else, that surprise RKO was timed beautifully.

Rusev and Aiden English def. The New Day to earn a spot in the Tag Team Title Match at Clash of Champions. So is Rusev Day the actual name of the Rusev/English team? Because I’m okay with that. These two match up better than I ever expected.

The Bludgeon Brothers win an enhancement match. If we’ve learned nothing else since they split the rosters again, it’s about the power of the enhancement match. They did wonders for Braun Strowman and Nia Jax, and they’re using them now to try and rehab Asuka a little bit. So it’s good to give Harper and Rowan a mix of jobbers and established names.

Bobby Roode def. Baron Corbin via disqualification after Dolph Ziggler hits him with the Zig Zag. Ziggler follows it up with a Zig Zag to Corbin. Ziggler was sporting a camouflage hat and a five o’clock shadow here. As if he needed to resemble Shawn Michaels anymore…

Ziggler is obviously in the Triple-Threat Match at the pay per view to take the losing fall. It’s just a question of whether they give it to Roode or Corbin. I’m all for getting that title on Roode as soon as possible. Corbin’s not doing it for me.

Charlotte Flair def. Tamina Snuka. Charlotte to defend the Women’s Title in a Lumberjack Match against Natalya at Clash of Champions. Supposedly Charlotte was supposed to feud with Tamina before they brought the Riott Squad in. Like this match, that would have been a snooze-fest. So let’s take a moment to be thankful for Ruby and the gang in that respect.

What I’m less thankful for is the dialogue they gave these girls. What Owens and Zayn got at the top of the show? This was at the polar opposite end of the spectrum. Extremely generic, cookie-cutter BS. I know next to nothing about Sarah Logan. And after that line she had about long-tailed cats in a room full of rocking chairs, I’m not sure I want to.

Randy Orton def. Sami Zayn, despite Kevin Owens escaping from the handcuffs.  Nakamura comes out to make the save. Owens and Zayn to face Orton and Nakamura at Clash of Champions, with Shane McMahon as the guest referee. If Owens and Zayn lose, they’re fired from WWE. I get the sense Orton really enjoys throwing Zayn around out there. Make of that what you will.

The next big step in Bryan’s apparent heel turn is obviously going to come at the pay per view, when he somehow grants Owens and Zayn the win. Though I guess it’s up for debate whether it’s an actual heel turn. There’s more gray area here than we typically see.

So do Owens and Zayn get anything if they win? A shot at the tag titles, perhaps?