It’s amazing how the Usos and the New Day have continued to top themselves over the last several months. They did it again here, turning in a performance with every bit as much drama and bad blood as the Kevin Owens/Shane McMahon match. One can even argue it was better artistically. In a match where everyone expects some kind of 20 foot dive off the cage, it takes real creativity to deliver on the Hell in a Cell concept while actually staying inside the cell. Both teams were elevated here. All these guys should be very proud.

While the signs were there in retrospect, Sami Zayn’s heel turn seemed to come out of nowhere. It’s a hell of an intriguing twist that could potentially breathe some valuable new life into Sami’s run on Smackdown.

So that’s twice Shane has tried the elbow drop off the top of the cell, and twice he’s crashed and burned. Maybe it’s time to pluck that one from the playbook, eh? Really good match, though. Now if only they hadn’t gotten that shot of one of Shane’s kids grinning as Owens was beating up his dad and taunting him.

The Shield finally reunites against the Miz, Cesaro and Sheamus. This was obviously something they’ve built to for months. So to see Reigns, Rollins, and Ambrose back together is cool. I imagine we’ll get them back in their trademark black outfits at TLC.

I’m trying to enjoy this for what it is. But one thing that does put a damper on it is that it’s obviously all just another attempt to get Roman Reigns cheered. Just look at the blocking in the segment. Rollins on the left, Ambrose, on the right, Reigns in the middle. And of course, Reigns kept using the Shield music after they broke up. So their entrance is going to be synonymous with him in particular.

Yes, I’m nitpicking. But this is also very transparent. What’s more, it’s not even going to work. For better or worse, most fans have made up their mind about Roman. As soon as this is over, the haters will start booing again.

Jason Jordan def. Karl Anderson. I’m not sure Booker T is the guy to be playing up the notion of Kurt Angle giving his son special treatment. His amazing career notwithstanding, he has virtually no credibility. As the weeks go by he just becomes more a verbal whipping boy for Michael Cole and Corey Graves. Granted, better to have him out there than David Otunga. But that dynamic between Angle and Jordan is important. Better to have Graves play it up.

Elias def. Apollo Crews. When Titus is on, he’s really on. Hokey as it was, I got a kick out of the banjo stuff before the match. This manager gig really suits him.

On the flip side, I’m not at all amused that Elias broke out the Undertaker’s “Old School” spot and walked the top rope. The announcers didn’t even acknowledge it. Though to be fair, Graves alluded to it, calling it a “disrespectful version of a cover song.”

Kurt Angle puts Enzo Amore in a Cruiserweight Title Match against Kalisto for later in the evening. Enzo called it the “Loserweight Division.” That one might stick. 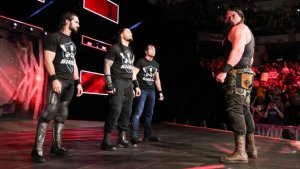 Braun Strowman def. Matt Hardy. The Shield emerges, Powerbombs Strowman through the announce table. This was really good. To his credit, Roman nailed his line about them being “the three workhorses that run this business now.” He even got to look into the camera.

Mickie James and Alexa Bliss exchange words leading up to TLC. Last week I talked about how WWE should exploit Mickie’s talent for country music and have her record her own entrance theme. We didn’t get that here, but it was definitely a step in the right direction. Mickie was in country gear here, and even put a little twang in her voice. This is good. For WWE audiences, this is fresh. And apparently, they like the term “biscuit butt.”. More of this, please.

Brian Kendrick and Jack Gallagher def. Cedric Alexander and Mustafa Ali. Why is Jack Gallagher is wrestling in that get up? Yes, he’s a heel now. But why does that mean he can’t wear wrestling trunks?

Both Alexander and Ali are so damn good. It’s such a shame they haven’t been able to get over to any real extent

The Shield to headline TLC against the Miz, Sheamus, Cesaro, and Braun Strowman in a Handicap TLC Match. Four on three? That’s a little weird. Strowman could do some amazing things in that environment, though. Especially with support from the veterans in this match.

Bray Wyatt reveals his “Sister Abigail” persona to Finn Balor. So Sister Abigail is Bray Wyatt with some kind of shroud over his head and a weird voice filter. Wow. What a great pay off to years of build-up.

And this was in the new “main event” spot. They wanted people to stay tuned in for that third hour after this. Balor can’t move on soon enough.

Emma def. Sasha Banks, Bayley, Alicia Fox, and Dana Brooke to earn a match with Asuka at TLC. Graves: “I don’t really know what to say about Emma anymore. I’m so baffled by the fact that she still exists.” Wow. What an awesome endorsement for Asuka’s first challenger.

To be fair no one actually expects Emma to beat her. That’s half the reason they chose Emma for this spot. She’s someone they can feed to Asuka, but also give her good match. Somehow I don’t think the same can be said for Alicia Fox or Dana Brooke.

I’m worried Dana Brooke is going to hurt somebody someday. That sequence she had in there with Bayley was….yeesh. But Alicia, and even Emma looked like they had two left feet out there too. This one just didn’t click.

Roman Reigns to face Braun Strowman in a Steel Cage Match next week. They’re going back to the well with these two, which is fine by me. Like the Usos and the New Day, they always deliver.

Kalisto def. Enzo Amore in a Lumberjack Match to win the WWE Cruiserweight Title. I hate to go back to Graves again, but he was really tearing Enzo down during his entrance here. I can’t tell if there’s legit heat between those two. Either way, it doesn’t pay to piss off one of the guys that calls your matches every week.

So Enzo puts his hand on Mustafa Ali during the match. Ali later gets his receipt, which more or less costs Enzo the match. If this means Ali gets to be in a (relatively) high profile feud with Enzo, I’m game. He deserves a shot.

I’d be surprised if Enzo didn’t get the belt back soon. This seems like something they concocted to get out of the no-contact clause thing. He could very well get it back at TLC.

By the way, where was Neville during all this?

2 thoughts on “The Shield Returns at Last, Plus Ponderings From WWE Raw”