After quite a bit of speculation, we learned Monday night that Asuka will be coming to Raw this fall. I assume it will be some time next month, as she’s currently nursing an injured collarbone.

Of course, Asuka is famous to WWE fans as the woman who went undefeated as NXT Women’s Champion for 534 days. She’s never been beaten in a WWE ring, and comes to Raw with more momentum and notoriety than arguably any of her fellow female NXT alums. Her matches are almost always among the highlights of the NXT Takeover shows.

There are more talented women on the WWE roster right now than at any time in the company’s history. Though obviously a marketing term, there’s a lot of validity to the “women’s revolution” they’ve been touting for awhile now. The problem is because of the brand split, we only have a handful of women on Raw and Smackdown. As such, we get a lot of the same combinations week after week. This is especially problematic on Raw, where matches are often drawn out to fill time.

The mystique of Asuka revolves around her being dominant, turning back challenger after challenger. But that approach becomes problematic when she has to be on television every week, and she’s only got three or four women to work with. Granted, they’ll probably feed her enhancement talent at first, as they did with Nia Jax. But once they get past that phase of her run, what’s to stop Asuka from becoming just another face in the crowd? How do you maintain that mystique? And how do you maintain the importance of her undefeated streak with so few names to beat? 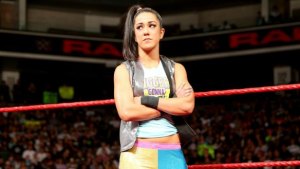 There’s not necessarily an easy solution here. But I think part of it involves bringing more women on to the Raw roster. There was a good amount of talk about Bayley getting booed on Raw a few weeks ago. The boos weren’t necessarily directed at her, but at the way she’s been handled creatively. Like everyone else on that roster, she’s been overexposed. What’s more, she was in there with the same handful of names every week. It was always Bayley and Alexa. Or Bayley and Nia. Or Nia against Sasha, who has Bayley in her corner. And of course, there’s Bayley and Sasha against Alexa and Nia.

Like anything else, if you get the same thing over and over again it becomes boring. It’s not exclusive to the Women’s Division by any means. I’ve been saying this Seth Rollins, Dean Ambrose, Sheamus, and Cesaro for weeks now. And of course, all four guys were in the ring together again this week.

More bodies in the Women’s Division will give all the ladies more breathing room, so they’re not necessarily doing the same thing every week. In Asuka’s case, she’ll have more challengers to beat, and a bigger talent pool to conquer. Now, if only there was a convenient place WWE could find more women to add to their roster….

By the way, did you guys see the Mae Young Classic?

Roman Reigns def. Jason Jordan. Reigns trades insults with John Cena again. This wasn’t what the Cena/Jordan match was. But this match still achieved its goal. Jordan’s not quite where he needs to be yet. But matches like these giant him valuable credibility.

One of these days Jordan is going to turn that double Northern Lights Suplex combo into a triple. Fans are going to lap that up. Myself included.

I credit WWE with trying to make this Cena/Reigns stuff as reality-based as possible, even going as far as to reference Roman’s failed drug test. Despite being obviously scripted, it’s created a lot of buzz. So again, it achieved its goal.

Sasha Banks def. Emma. So Alexa Bliss and Nia Jax were both out there on commentary, and they’ve got them sitting next to one another at the announce desk. I don’t understand why they’re still supposed to be friends. Nia turned on Alexa. So what motivation does Nia now have to keep up this alliance? On top of it all, they’ve got them awkwardly sitting next to each other like kids in detention. It just doesn’t make sense.

Brock Lesnar and Paul Heyman call out Braun Strowman. Strowman lays out Lesnar yet again. The best part of this segment? The look on Lesnar’s face when he saw Strowman had gotten back up after the big German Suplex.

This is a good story, and one we haven’t seen before. Brock Lesnar is the underdog, and Strowman has all the momentum in the world.

Bray Wyatt def. Goldust. Wyatt wipes the paint off Goldust’s face to reveal, “He’s just a man!” Finn Balor comes out for the save. LOVED that somersault off the apron Goldust did. Remember, Goldust is 48 years old and has been wrestling for the better part of 30 years. As Corey Graves said, the man seems to age in reverse. 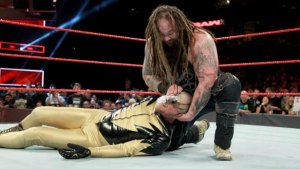 Sadly, they seem to have pulled the plug on his renewed push. The only reason he was even wrestling Bray was because he had face paint on. So they had Bray beat him. I stand by my statement that Goldust could be something big if pushed the right way. If they can strap the rocket to Jinder Mahal, they can do it with Goldust.

On the upside, Bray won a match. That’s more of a rarity than it should be.

A fight breaks out between Seth Rollins, Dean Ambrose, Sheamus, Cesaro, Luke Gallows and Karl Anderson. This is a little more my style, in contrast to the Alexa/Nia stuff earlier. A bunch of pissed off guys unable to restrain themselves. I just wish it hadn’t led to yet another consequence-free eight-man tag.

A vignette airs for the arrival of Asuka. God damn. That was the best character introduction vignettes they’ve done in years. Loved the use of the different masks, the spooky lighting, the music, the little glimpse of her face at the end.

Elias def. Kalisto. Obviously Elias is supposed to be a bad guy, insulting the crowd the way he is. But the people were with him. A babyface turn isn’t out of the question here…

John Cena def. Braun Strowman via disqualification. Pretty good match. They spent a good amount of time building to Cena slamming Strowman. So you knew it was going to happen at some point. That doesn’t make it any less impressive, of course.

Would have loved to see Brock come out and try to get some payback from earlier. I guess you can write that off strategic discretion. 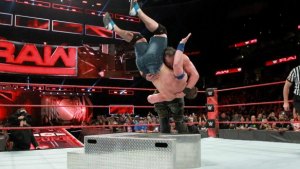 So Strowman hitting Cena with the steps on the outside isn’t a DQ. but Strowman getting him in the ring and slamming him on top of the steps is? Just a ring of the bell. Is that so hard?

The Miz and Maryse announce their pregnancy on Miz TV. Enzo interrupts. Miz gets disqualified as he and the Miztourage beat down Enzo. First and foremost, congrats to Miz and Maryse. Mrs. Primary Ignition and I are actually working on headin’ down that road ourselves. So I appreciate it that much more.

Between the Cena/Reigns stuff and Miz talking about Enzo being hated backstage, they’ve been much more reality-based lately. It’s a marked improvement.

I assume all that stuff with the mic was supposed to be there. It seems like Miz and Enzo messed up a spot, then Enzo took the mic and made the “your wrestling is straight to DVD” comment. Either way, it felt spontaneous. That’s the important thing.

Seth Rollins, Dean Ambrose, and the Hardy Boyz def. Sheamus, Cesaro, Luke Gallows, and Karl Anderson. I fully expected Cena and Strowman to main event the show. So when it became clear they were going to close things out with this big tag match, I wondered if they were going to do a big angle. Nope. Business as usual. A hell of an anticlimactic ending to what ended up being a pretty damn good show.

One thought on “Asuka Coming to Monday Nights, and Other Ponderings From WWE Raw”