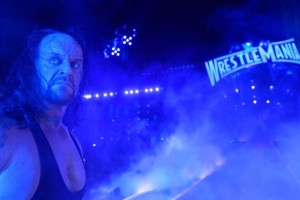 Since Wrestlemania XXXIII, there’s been truckloads of speculation about the Undertaker’s retirement. It’s a pretty natural conclusion to come to, given the way that show ended. The #ThankYouTaker hashtags broke out again, you saw all kinds of tributes to him, and WWE have played that moment up in a big way ever since. “I retired the Undertaker” is practically Roman Reigns’ new catchphrase. They’ve also given him Undertaker’s “This is my yard” line. Undertaker’s name was even thrown around in the big Roman Reigns/John Cena promo on Raw last week, with Cena calling the Dead Man a “battered veteran at the end of his career with a bad hip.” Hmm…

What people have been keen to point out, however, is that the announcers have been more tentative as far as ‘Taker’s retirement. They always talk about Reigns “potentially retiring” the Undertaker, as opposed to giving it any sort of finality. And of course, despite all the speculation there hasn’t been any confirmation about Undertaker being done. Until they spell it out for us that he’s retired, there’s a decent chance we’ll be seeing him in the ring again. Actually, there’s probably a really good chance we will.

I’m not sure how I feel about that.

While the Undertaker/Roman Reigns match wasn’t anything to write home about, the closing moments of Wrestlemania XXXIII were genuinely touching. There was an outpouring of emotion as fans seemingly said goodbye to a man who’d given so much of himself for over a 25 year career. Many of us had been watching him since we were children. Now, as adults, we were watching him ride off into the sunset. 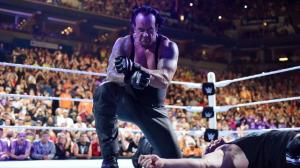 To renege on a moment like that is almost in bad taste. This is twice now that we’ve gotten misty-eyed saying goodbye to the Undertaker. The first was after he lost to Brock Lesnar at Wrestlemania XXX, ending his big winning streak. Me? I didn’t buy that as the end. But this Roman Reigns thing is different. In addition to drudging up all this emotion, it had a nice passing of the torch element to it. While the build-up could have been done much better, the generational aspect of the story was very appealing. And while so many detest Roman Reigns, the match had the right finish. If Undertaker comes back, it spoils all that.

Let’s also factor in the Undertaker being 52 years old, and not exactly blowing anyone away with what he did in the ring this year. Was it all his fault? Not necessarily. Remember, ‘Taker had recently come off hip surgery. He would reportedly go on to have a full on hip replacement done. There’s a lot to be said about a potential Reigns/Undertaker rematch, or the John Cena/Undertaker match so many have wanted. But if the real-life Mark Calaway is unable to perform at a high level, is bringing him back even worthwhile?

But at the same time…he’s the Undertaker. If anyone has earned the right to come and go on his own terms, it’s him. Let’s also remember that much of ‘Taker’s best in-ring work was done in his early to mid-forties. Think about his Wrestlemania matches with Batista, Shawn Michaels, Triple H, and CM Punk. He has defied father time before. Given enough recovery and preparation time, it’s entirely possible he could do it again.

Regardless, the smart bet is that ‘Taker will be back sooner than later. But here’s my last lingering question: When he finally does say goodbye, how many of us will actually buy into it again? At what point does this Undertaker situation become just another version of The Boy Who Cried Wolf?

One thought on “An Undertaker Return: Is it The Boy Who Cried Wolf?”