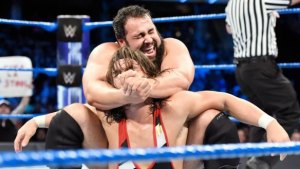 Can you really blame Rusev for wanting out of WWE?

At least that’s the rumor. Allegedly, the “Bulgarian Brute” is frustrated with how he’s being used lately, and even went as far as to ask for his release. That sounds familiar, doesn’t it? It’s the same reason Cody Rhodes left. Ditto for Ryback, Wade Barrett, and a few others on a list that’s growing longer and longer as time goes on.

It’s not like there isn’t a precedent for Rusev playing a more prominent role. He’s worked with both Roman Reigns and John Cena on major pay per views. You can throw Randy Orton on that list too, despite their Summerslam match lasting all of 10 seconds. Considering where he’s been, it’s understandable that he’d be frustrated with where he is now. Because these days Rusev is just…there. He’s an established heel for babyfaces to beat as they build momentum toward a bigger match. Has he reached his ceiling in WWE for the time being? Is he better off leaving and building on his reputation elsewhere?

Rusev has never been a top guy. I don’t know how much value he has in terms of being a marquee babyface. But he’s got a hell of an upside as a menacing monster heel. He looks the part, he’s got a good amount of charisma, and he’s more than capable in the ring. He’ll ever be a Roman Reigns type of star. But he deserves bigger opportunities than he’s being given right now. And he can get them.

WWE may be reluctant to grant Rusev his release, given how it would effect his real-life wife Lana. But if the real-life Miroslav Barnyashev (What a name…) and Catherine Perry get a chance to shine outside the WWE bubble, they should take it. There’d be no shortage of wrestlers willing to step up and take Rusev’s spot. And as we’ve seen numerous times already, a WWE run can be just as good, if not better, the second time around. 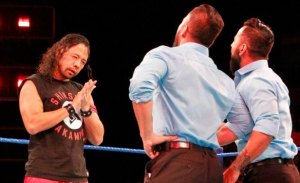 WWE Champion Jinder Mahal opens the show. The Singh Brothers apologize for failing last week against Shinsuke Nakamra. Mahal, Rusev, and the Singhs get the better of Nakamura and Randy Orton in a scuffle. “I should be revered as your WWE Champion!” The word is pronounced “re-veered,” Jinder. Not “reh-verred.”

This was not good. Nakamura was apparently supposed to knock the Singhs aside and get to Jinder. But he just gave them a little push, and they just jumped out of the way. The Singhs were way too cartoony here, like henchmen on the ’60s Batman show. Brutal.

Shelton Benjamin and Chad Gable def. The Ascension. Benjamin looked as good as he’s ever been. Once he and Gable get over to teams like the New Day and the Usos, we could see some really amazing stuff.

Hearing JBL call an Ascension match in 2017 is interesting, considering he buried them so much on commentary when they first came up to the main roster. He really damaged them, seemingly beyond repair. A repackaging could help these guys. But for now, they’re more dead than disco.

Tye Dillinger answesr AJ Styles’ United States Championship open challenge, despite being attacked by Baron Corbin beforehand. Styles gets a quick win with the Calf Crusher. While there’s no shame in losing to AJ Styles, I continue to be disappointed in how WWE is using Tye Dillinger. There’s something there with him. But he’s become just another guy on the roster.

So AJ’s next program is indeed going to be Corbin. The match between Corbin and Nakamura may have crapped the bed. If anybody can give him a good match, it’s Styles. 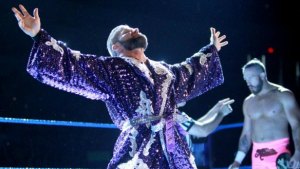 Kevin Owens interrupts Aiden English to badmouth Shane McMahon. After responding, Shane sends Sami Zayn out to face English. Owens makes himself the referee, Powerbombs Zayn to give English the win. When Zayn’s music hit, I thought for sure we were getting him against KO. Have we seen these two go one-on-one since they came to Smackdown? I don’t think they have. That’s shocking, considering how often we used to see it on Raw.

The Usos def. The New Day, will decide the stipulation for the Tag Team Title rematch. I wish they wouldn’t keep giving this match away on free TV. On the Summerslam pre-show these guys proved they deserve to perform on the big stage. They shouldn’t diminish them by simply throwing them out there week after week.

This was decent. Obviously not as good as the Summerslam match. But it wasn’t meant to be. Interested to see what they do with the stipulation. As I said last week, they should really put these guys in Hell in a Cell. But I doubt they can wait that long.

Tamina won a squash match with Lana in her corner. Byron Saxton said he’d never seen a duo like Tamina and Lana before…

He’s never seen two people who can’t wrestle before? Is that what he means? It must be.

Randy Orton and Shinsuke Nakamura def. Jinder Mahal and Rusev. Orton hits the RKO on Nakamura after the match. Orton and Nakamura to wrestle next week to determine top contender for WWE Title. Pretty standard stuff here. And of course, Rusev took the fall. The upside? They didn’t pin Jinder again. 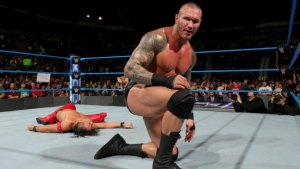 The obvious direction for them to go is Jinder against Nakamura inside Hell in a Cell, the idea being the cage will keep the Singh Brothers out. But that program doesn’t deserve the cell. Plus, while I like what they’ve done with Jinder, his pay per view matches haven’t exactly been stellar. How much he’s to blame for that is up for debate. But he’s not ready for Hell in a Cell. Frankly, I’m not sure Nakamura is either.

One way or another, we’re probably going to find out.