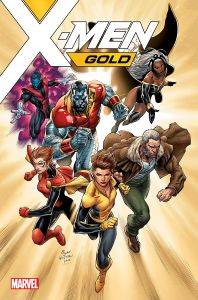 I’m a continuity buff. It’s a fool’s errand, considering how often timelines change in American superhero comics. But for me, half the fun of getting into superhero books was going back and reading all the major stories, seeing how things progressed, etc. That being said, I’ve long since given up on deciphering X-Men continuity. Between all the different characters that have come on and off the team, died and come back, travelled through time, the ones with dopplegangers from other time periods, and all such insanity, it’s just too much. Considering how amazing and iconic some of these characters are, getting tangled up in all the plot threads becomes horribly frustrating.

That’s why I’ve been waiting awhile for a series like X-Men Gold, a book that not only serves as a jumping on point for new readers, but as the title says, brings the concept “back to basics.” This title gives us heroes we recognize fighting for mutants and humans alike. In making Kitty Pryde the team leader, we’ve advanced to the next chapter in the story while remembering what so many loved about it in the first place. It acknowledges the X-Men mythology, but tells its own story. If you’re a new reader or someone looking to jump back into things (as I was), that’s what you want.

In addition to Kitty, our team consists of Old Man Logan, Storm, Colossus, Nightcrawler, and Rachel Grey (now called Prestige), with Gambit being added in issue #4. The most glaring “Huh?” moment will likely involve Logan. The operative question being, “Why is Wolverine an old man?” The book lets us know this is a character from another world, but it doesn’t beat you over the head with it. The dynamic between old flames Kitty and Peter (Colossus), which goes back decades, is also a focal point of the book. That’s obviously enhanced if you know their history. But what the book gives you is enough. 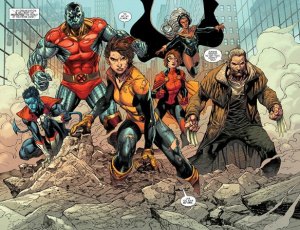 By making her the team leader, X-Men Gold shines a really nice spotlight on Kitty’s evolution as a character. In contrast to the younger version that more casual readers are familiar with. The Kity we see here is battle tested. She’s comfortable calling plays in the field. Her teammates, most of whom are older and more experienced, follow her lead without question. As the mutant community works to rebuild its image after the events of Inhumans vs. X-Men, we see her step up and serve as an ambassador. She’s as much a main character here as she’s ever been.

Guggenheim was wise to spend quality time on Rachel Grey here. She’s the one on this team that most casual fans won’t know about. We get a subplot in issues #4-6 about her being afraid to use her powers to their fullest extent, for fear of losing control like her mother Jean Grey. Or worse, going bad like her father Cyclops. She even gets little scenes with psychic projections of both. It’s a nice character snapshot that sets the table for stories to come.

The bad guys in this book are classic X-Men villains with a new coat of paint. We see the Brotherhood of Evil Mutants, a group we’ve most notably seen led by Magneto. In the background, we have a political pundit trying to rally the public against mutants. She’s clearly an analogue for a Fox News type figure. Later on, Gambit is caught in the middle of an accident that sees a “smart swarm” of nanites mix with Sentinel tech. This creates an entirely new breed of mechanical menace for our heroes. None of this is terribly original or new. But it falls in line with the book’s “back to basics” approach. So it works.

Our penciller for the first three issues is Ardian Syaf. His art has a weight to it that fits the dramatic moments in this story very well. Whether it’s the two-page spread in issue #1 (shown above), or the understated “ra ra” moment at the end of issue #3 (partially shown below). Our opening action sequence with the team facing Terrax is also suitably epic.

I assume the plan was for Syaf to stick around after issue #3. One way or another, that didn’t happen. Subtle anti-Christian and anti-Semetic messages were found in the pencils for issue #1, and Syaf was fired. How ironic, in a series that’s ultimately meant to be about tolerance. I don’t want to dive into the politics of what Syaf did. But obviously this is the wrong forum, with the wrong audience.

R.B. Silva tags in for the remainder of the book. He and inker Adriano Di Benedetto give the book a softer aesthetic that objectively is fine. But being the second artist in a collection like this is always challenging. The tone has been set, and now you’re deviating from it. But Silva draws awesome Sentinels, and his Gambit isn’t too shabby either. Sadly, he doesn’t stick around for subsequent issues.

Occasionally someone will ask me, “Where should I start reading [insert character name]?” That’s always been a fairly hard question with the X-Men books. Historically, I’ve pointed people to Joss Whedon and John Cassaday’s Astonishing X-Men run. But X-Men Gold might just become my new answer. Or at least one of my answers. I won’t compare it to the Whedon/Cassaday stuff in terms of quality. But it’s about as accessible as any X-Men story I’ve read. It’s a great doorway into the saga’s modern era, while still advancing the characters for longtime readers.