Is Mike Kanellis dead? Not the man himself, of course. But the character and his chances for success in WWE. That’s what a lot of smart fans have been saying since his loss to Sami Zayn at Battleground. He was also pinned by Sami Zayn in a tag team match two nights later. I’ll admit, it doesn’t exactly inspire confidence. But does that mean Mike Kanellis is dead?

Let me say this up front: Wins and losses matter in pro wrestling. No matter how much some will tell you otherwise, it’s built into the fabric of the business. In theory, it’s why we tune in each week. It’s what drives the characters, and pushes their stories forward. Otherwise, what’s the point?

But let’s also not lose sight of the fact that these are still characters in a story. Maria and Mike Kanellis are heels. As I’ve said before, villains can bounce back from losses a lot quicker than heroes can. They can be motivated by revenge, selfishness, greed, etc. That path is a bit more narrow for the heroic types, as they’re bound to their honor.

Granted, if the bad guy never gets any kind of an edge or a win, he sacrifices his credibility and he’s no longer a threat. That’s when you end up with a character like Bray Wyatt, who’s just now starting to gather some steam again. At least, for now.

Did those losses to Sami hurt Mike Kanellis? Maybe. Maybe not. But for crying out loud, the act isn’t dead. Not every new WWE talent needs to go on a big winning streak once they come up to the main roster. Yes, you want to get them with the audience. But there’s more than one way to do that.

Maria and Mike Kanellis might not be a main event act together. But they still make a damn good package. I think the whole “Power of Love” thing is brilliant. Having them fawn over each other on television strikes a great nerve. We can’t just write these two off because Mike lost a match or two early on. He’s not a made man. But there are still plenty of opportunities ahead for him.

Wins and losses matter. But they aren’t the only thing that matters. 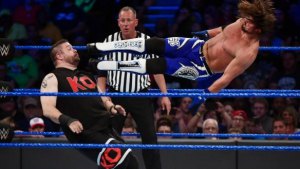 AJ Styles def. Kevin Owens to retain the United States Title. After a controversial finish, a Summerslam rematch is made, with Shane McMahon as the guest referee. Objectively, these two have had good matches. That’s no surprise, as they’re two of the best in the world. But for some reason I just haven’t been feeling this feud. It’s not a lack of chemistry. There’s just some intangible that isn’t there. That’s why I was hoping to see this end after Battleground.

Referee Mike Chioda took a “punch” from KO in this match that clearly didn’t connect. Bad break. Especially considering it led to the finish.

On the subject of chemistry, Kevin Owens and Shane McMahon have an intriguing tension going on. Something between the two of them could help Smackdown maintain interest as we move into the fall, which is often the company’s most creatively challenging (and frustrating) period.

The Usos mock the New Day’s entrance, and cut a scathing promo. More awesome stuff. Tough to believe WWE has had these guys on the main roster since 2010, and we’re just now seeing this side of them. 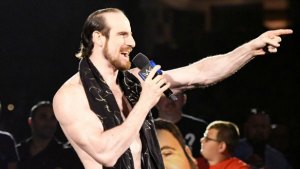 Aiden English def. Sami Zayn. Maria and Mike Kanellis come out to rub salt in the wound. Aiden English gets a CLEAN win over Zayn? Damn. That’s the biggest win of this guy’s career. They did a fine job of making it look like a fluke victory, with the flash pin. I’m an Aiden English fan. His matches aren’t incredibly memorable. But he’s got a different kind of look and some decent singing chops. Very pleased he’s getting a chance to shine, as opposed to getting lost in the shuffle after Simon Gotch’s release.

Naomi and Becky Lynch def. Natalya and Carmella. Interesting counter to Carmella’s Code of Silence by Naomi. How much of a chance does Nattie actually have of beating her at Summerslam? As great as she is, I’d imagine it’s slim to none.

Rusev def. Chad Gable. Rusev issues an open challenge for Summerslam, which is accepted by Randy Orton. Really good showing here between these two, which had a great first chapter. Rusev threw Gable a little bit, playing to the size and power difference. Thus, it was that much more impressive seeing Gable suplex Rusev the way he did. The big Bulgarian got the victory in the end. But this did what it was designed to do. Both guys got over.

This match got me thinking: Could Rusev have been the guy WWE strapped the rocket to, instead of Jinder Mahal? For my money, the answer is yes. Rusev could have made just as good an evil foreign champion. Especially if he payed tribute to Vladimir Putin like he used to. Granted, the Russian connection isn’t quite as strong without Lana at his side. But they could make it work. He’s also better in the ring and on the mic. Did they miss an ample opportunity with this guy?

Shinsuke Nakamura def. John Cena to earn a WWE Championship Match at Summerslam. Would you call this an upset? I know that question will piss people off. But remember, this is WWE. It’s Cena’s house.

This was the right move to make. Nakamura has been on the main roster for a few months. But they’re still trying to establish him as this legendary wrestler to the casual fanbase. A clean victory over Cena goes a long way in that regard.

The match itself was pretty good. Naturally, much of it was about the feeling out process between Cena and Nakamura. Their personalities made for an interesting clash.

It’s almost a given that at some point during a big John Cena match, his opponent is going to kick out of the Attitude Adjustment at least once. Nakamura did it twice in this match. Cena’s been using the AA for over a decade. In all that time, hasn’t anyone considered giving him a different finish? He could still use the AA. But how about giving him something that actually works?

Up to this point, the prevailing theory about Summerslam had been that it would be Cena challenging Mahal for the title. So if not Jinder, then who…?

Baron Corbin attacks Nakamura. Cena gives him an Attitude Adjustment through the announce table. Ahhhh, there we go. It’s Cena vs. Corbin.