I turned Raw off this week at about the 90-minute mark. It was the first time I’d given up on a show since November. Apparently I missed some good stuff afterward, including a follow-up on the split between Enzo and Cass, Samoa Joe choking out Brock Lesnar, and a Gauntlet Match with the women.

What a shame I missed it. But I just couldn’t take it anymore. The show was actively irritating me.

It started when they brought Josh Duhamel out to do commentary during a six-man tag. He was there to promote Transformers: The Last Knight, and an upcoming film he’s working on with WWE Studios. They spent a large portion of the match asking Duhamel questions about the movies before actually bothering to talk about what was happening in the ring. I’ve been watching this stuff for over 20 years, and this kind of thing  is nothing new. But it’s seldom been as grating to me as it was here. It’s like they were trying to mimic a talk show interview.

Later in the show, they did a Miz TV segment with someone named Lamelo Ball and his son LaVar Ball, and then his other son Lonzo Ball. I had no idea who any of these people were. Apparently Lonzo just got drafted by the LA Lakers, so it was partially meant to appeal to the crowd in Los Angeles. But this was just not good. It was an obvious attempt by WWE to get coverage from the major sports outlets so they’d look “legitimate.” Whatever that means…

It was then made worse when 15-year-old Lamelo used the N-word twice. It happened during Dean Ambrose’s entrance, so the music pulled a little bit of focus from it. But it happened. Some of the blame goes on Lamelo for that. But he’s just a kid. What the hell was he doing with a live mic?

And frankly, as a wrestling fan, there’s a larger issue at play for me here. The Ball family shouldn’t have had a featured role on Raw to begin with. I understand WWE wanting to get “the rub” from celebrities. It makes good business sense, and it’s certainly worked in the past. Think of names like Mr. T, Cindi Lauper, Mike Tyson, and Floyd Mayweather.

But WWE has bigger problems right now that can’t be masked by celebrity involvement. They’re the same problems that have been there for years now. Everything is overly sanitized. The wrestlers are too scripted. Certain characters feel hollow. Nothing feels real. The show is too long. The list goes on.

The ratings reflect it, too. Viewership fell below three million people again this week. Pundits talk a lot about WWE’s “base” audience. As in, the people that are going to watch the shows no matter what. Usually, I’m part of that base. But this past week, they chased me off before I could see most of their big angles. If it’s gotten to the point that they’re chasing hardcore loyalists like myself off, how do they expect to bring casual viewers back to the product?

Over seven million people have watched the YouTube video of the first Brock Lesnar/Samoa Joe’s confrontation on Raw. So it’s not like there’s no interest in the WWE brand. I think a lot of the more casual fans are simply waiting for Raw to be good again. Why should they waste their time otherwise?

So what do they have to lose by changing up the presentation and the creative? More importantly, how much do they stand to gain by taking some risks? It’s not like what they’re doing now is setting the world on fire. Anything so we don’t see crap like that Miz TV segment anymore. That thing stunk like balls…

Sorry. I couldn’t resist. Let’s move on to Smackdown.

Daniel Bryan opens the show, Carmella vies to get her Money in the Bank briefcase back. James Ellsworth is ejected from the building. I chuckled at Ellsworth’s crack about Bryan not being able to cut it in the ring anymore. Bryan has made no secret about wanting to get back in there. He just can’t get cleared by WWE doctors. The smart bet his inevitable return take place in Ring of Honor or New Japan Pro Wrestling. That’s sad news for WWE buffs. But as much as anyone, Bryan deserves to live life on his own terms. 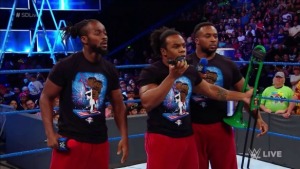 The Usos def. The Hype Bros. The New Day to challenge for the Smackdown Tag Titles at Battleground. Surprised the Hype Bros lost this match clean. Maybe that Zack Ryder heel turn is coming sooner than I expected.

So Kofi Kingston insults the Usos, and they just stand there and take it? Yes, they’re heels. But do they have to be wusses too? At least tease some physicality.

Naomi def. Lana to retain the Smackdown Women’s Title. I was actually rooting for Lana here. How much heat would she get if Rusev came down and cost Naomi the match? Is Lana as good wrestler yet? No. But neither was Stephanie McMahon when she was Women’s Champion. Just do it!

Randy Orton interrupts Aiden English to challenge Jinder Mahal to another WWE Title Match. Shane McMahon grants his request, allowing Mahal to choose the stipulation Mahal chooses a Punjabi Prison Match. How nice that they just happened to have that stock footage of the Punjabi Prison structure standing by. That’s the kind of thing that just shatters your suspension of disbelief.

Jinder name-dropped the Great Khali in this segment. Not sure how good an idea that was. Considering the quality of previous Punjabi Prison Matches, do they really want people Googling them with the Great Khali’s name attached? Not exactly a recipe for quality content.

Carmella def. Charlotte Flair, Becky Lynch, Natalya, and Tamina Snuka in a Women’s Money in the Bank Ladder Match to regain the briefcase. Great effort from all the ladies involved here. It seemed like they were trying to slam each other hard to make up for a lack of hitting one another with the ladder.

They did a weird sequence where Charlotte and Tamina (with her Joan Jett look) were holding a closed ladder straight up, and Becky Lynch tried to leap up and climb it. They held it there for several seconds, then let it drop across the ropes as Becky remained perched. A few seconds later, they then attacked her. Very tentative. Again, it hurts your suspension of disbelief. But then again, I’m not the one out there on the ladder…

That chair shot Carmella gave to Becky at the end of the match looked weak as hell. If you’re going to use the damn chair, make it look good! That being said, this was the right finish. Carmella gets heat with how she won at the pay per view, and she keeps it here. Smackdown has its new top heel in the Women’s Division. But lay that damn chair in! Also, don’t let the cameras catch you peeking at the ring when you’re supposed to be down on the outside!

You live and you learn…