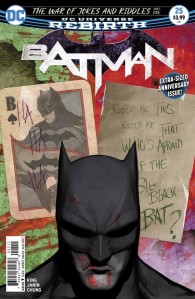 Not going to follow up on the whole marriage proposal thing, huh? Alright, I guess that’s one way to do it…

To be fair, we do kinda/sorta get an answer. “The War of Jokes and Riddles” is framed as a story being told by Bruce Wayne to Selina Kyle about his early days of Batman. You’ve got to figure if she’d said no, they wouldn’t be in bed together like we see them here. So, congratulations?

For the Joker, the unthinkable has happened. The Clown Prince of Crime has found his life suddenly devoid of humor. He can’t bring himself to laugh, or even smile. Conversely, the Riddler now finds all puzzles and quandaries have no thrill or meaning. The common cause? Batman. The Riddler proposes an alliance, but Joker responds with a gunshot that will ignite a war to decide who gets to kill the Dark Knight. A war with all of Gotham City in the crosshairs.

The Joker and the Riddler have similar mischievous, game-ish motifs, and obviously they’re both completely off the mental reservation. So they make natural rivals, in terms of one trying to outdo the other. Until now, that idea hasn’t been explored much in their near 70-year history of coexistence. So to see it played up as a big event like this is really cool. What’s more, the solicits make it look like they’re looping in most of the other major Batman villains. Almost like a Long Halloween type ensemble story. They’re diving head-first into the rogues gallery on this one.

Mikel Janin is back on the pencil, and he’s channeling his inner Brian Bolland. His Joker has a Killing Joke vibe to him. Nothing overt. The way he draws Joker’s face. The black suit he’s wearing, which is reminiscent of the Red Hood sequence in that book. The fact that this is a pretty dark and moody issue adds in that respect as well.

Janin’s take on Edward Nygma is a little bulky for my taste. Look at the lower panels in the image at right. Facially, he looks a little like John Cena, doesn’t he? He’s also more physically dynamic than we’re used to seeing. Early in the issue we see a cop questioning him in Arkham. He eventually leaps up in the air and slashes the guy’s throat. It’s almost a Matrix move.

King also has Riddler just recite riddles to himself. They’ll loosely connect to the situation he’s in, which justifies them to an extent. But it’s a trait I can’t remember seeing before. Not sure how I feel about it…

Still, Janin and Tom King respect the Riddler, just as Scott Snyder did during his run. There’s a really nice sequence where the Riddler escapes prison simply by saying the names of all the guards’ daughters. Answers, information, those are his currency. His power lies in his ability to be cunning and clever. And for a bit of charm, he’s got the classic green bowler hat on during the whole thing.

We get back to back two-page spreads in this issue, each a wide shot of the Joker’s office. The Riddler in one (shown below), Mr. J in another. It conveys a pretty big moment. Our first meeting of the two sides before the fighting begins. They’re also beautiful pages, Janin’s inks and June Chung‘s colors aligning perfectly to show us a gorgeous night in Gotham City. Though I can’t help but wonder how much this artistic choice had to do with the added page count for this “anniversary” issue.

There is one thing Batman #25 leaves unclear, perhaps purposely. In the office scene, the Joker shoots the Riddler at near point-blank range. He seems to hit him right in the gut, and we see a pool of blood. Yet Nygma is able to get to his feet and stumble away. Is he wearing a protective gimmick around his waste? Is the Joker using rubber bullets for some reason? What gives? The war should be over right here!

Tom King had a rocky start on Batman. The series is still a little rocky these days. But when this team is on, they’re really on. There’s nothing in here that damns “The War of Jokes and Riddles” from the get-go. But I’m not chomping at the bit to get to the next issue either. As a single issue, Batman #26 is fine. But for now, the story is still in the “Wait and See” column.