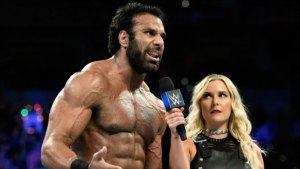 This was…surprising. Especially when you consider how few TV matches Jinder has won since his return. Last week he lost to Finn Balor on Raw, and then Mojo Rawley the next night on Smackdown. He was essentially brought back to put over the newer guys. But now, seemingly out of nowhere, he’s got a WWE Championship Match on pay per view.

Though when you look at the big picture, t’s fairly obvious why they did this. Smackdown needed another big heel, so they strapped the rocket to Jinder. He’s a pretty easy guy to boo, fitting well into the classic foreign heel category. It seems he’ll even be getting some back-up from the Bollywood Boyz. It could work out really well.

Oddly enough, this all reminds me of what WWE did with JBL back in 2004. Brock Lesnar had just left the company, and Smackdown needed a new top heel. They found one in Bradshaw, who’d found his greatest success teaming with Ron Simmons as the APA. He was repackaged as John Bradshaw Layfield, pushed to the moon, and became WWE Champion a few months later. At the time, a lot of the “smart fans” crapped on it. Mayfield had never been an established singles star. But in retrospect, no matter what you think of him personally, JBL made an awesome heel champion. He’s obviously still very easy to dislike in 2017.

When you look at it that way, Jinder Mahal may be getting a “JBL push.” I never, ever expected him to be competing for the WWE Title. But stranger things have happened… 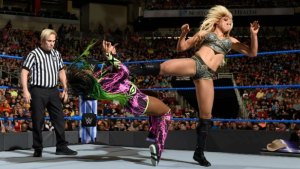 Charlotte Flair demands a match for the Smackdown Women’s Title. Naomi answers her, and gets physical. Charlotte later pins the champion to earn a title match next week. Naomi came off really well on this show. The “I ain’t never scared” line could be a new catch phrase for her.

This wasn’t the match I was hoping for. The crowd was sitting on their hands for most of it. At one point, Naomi tried one of her trademark spots, going for a flurry of kicks. Somehow, it just looked laughable this week. Some of it had to do with how Charlotte sold it. But we’ve obviously we’ve got more coming from these two. They’re both so damn athletic. They can do better than this.

Primo and Epico def. American Alpha. Ouch. Jordan and Gable get beat by the Shining Stars. That’s got to hurt…

Though apparently they’re not the Shining Stars anymore. They’re calling them the Colons,  which is their legit family name and are playing up their lineage. That sure as hell works for me. No more travel brochures, no more matador costumes. Just straight up wrestlers. That suits these guys.  At least for now. The in-ring element has always been their strong suit. That was evident here. They had decent chemistry with Jordan and Gable. But again, the crowd was pretty dead for this. Like Jinder, Primo and Epico spent most of their time on Raw losing. It could take awhile for them to build up any sort of steam.

Kevin Owens quickly defeats an enhancement talent in his “Face of America” Open Challenge. I love how they projected Owens’ face on to the entrance ramp. Very in-character for Owens.

They’re definitely letting Owens put his spin on the US Title, John Cena’s US Open Challenge concept, and the whole anti-America thing. If they’re going to have Jinder do something similar, then they need to be careful the two characters don’t bleed into one another. If they do, the most charismatic Owens will easily overshadow the less established Jinder.

AJ Styles def. Baron Corbin via count-out. A fairly anti-climactic main event, with an even more anti-climactic finish. They can’t all be barn burners, I suppose. Still, no one moves like AJ Styles.