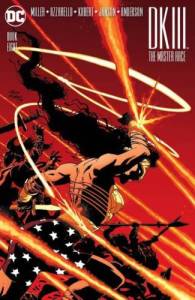 Originally, this was supposed to be the end of the line. DKIII was supposed to run for eight issues before a ninth was announced last September. As much respect as I have for all the talent involved here, they should have gone the other way and capped it at seven. DKIII has an okay story, but it’s officially worn out its welcome.

Quar’s Kryptonian forces are at war with Wonder Woman and the Amazons, with Lara the Supergirl caught in the middle. So now the question becomes: What action will be taken by the daughter of Superman and Wonder Woman? Meanwhile, the Lazarus Pit has restored Batman. But Quar is preparing to make his final move…

The entire story has been building toward this fight between the Kryptonians and the Amazons. But somehow, like last issue, this still fills like filler and transitional material. Andy Kubert, inker Klaus Janson, and colorist Alex Sinclair get to have flex their muscles by following Wonder Woman through a mildly gory battle sequence. But there’s not much drama in what we’re seeing. It’s just Wondie ripping through the bad guys because of some loophole about magic that isn’t really explained. All with a baby strapped to her back, who is somehow smiling through it all. Quar isn’t there, nor is Lara’s love interest. So these are essentially a bunch of Kryptonian foot soldiers.

This penultimate chapter, and this big battle, might have been the ideal place for Lara to make her choice. Does she side with her mother and the Amazons, or Quar and the Kryptonians? We get no such moment in this issue. Not even a cliffhanger to bring us into the next issue. That might have given this issue the emotional kick it desperately needs.

That’s not to say some of this isn’t fun. While there’s an extremely awkward splash page of Wonder Woman leaping (shown left), our artists do great work with the Amazons. Early on, they answer the Kryptonians’ challenge with a spear in a really cool way. Once we get into the physicality, Sinclair puts a red sky over the proceedings, striking a subtle yet pronounced emotional note. Azzarello also gives Diana a couple of good narration lines about the Amazons being an isolationist society: “Perfection stagnates. Perfection frustrates. Isolation gives to yearning.”

On the subject of Sinclair, this is his first time coloring the main story. You can absolutely notice the difference, everything pops a little more.

So where is Batman during all of this? He’s around. Like all the other characters, he’s being moved into position for the climax. Once he’s suited up, we do get a nice little moment with the Jerry Robinson Batmobile (shown below), its lone fin and big Bat head out in all it’s glory. As a life-long Batman buff, it made me smile.

But it also illuminates a major problem with DKIII. Out of the three chapters in Frank Miller’s so-called “Dark Knight trilogy,” this one may have the least to do with Batman himself. Or even the character’s lore and mythology. This feels less like a Batman story, and more like a Justice League story that Batman plays a big part in. The Dark Knight Strikes Again had a much larger scope than the original. DKIII might have been a good time to tighten the focus again. 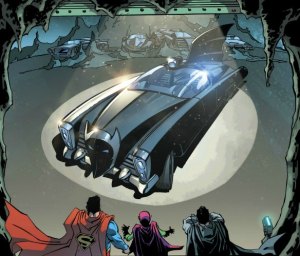 There are elements in this story that make me wonder if that wasn’t supposed to be the case at one point. We see Carrie Kelley take up the mantle of Batgirl, the scene she had with Commissioner Yindel on the rooftop in issue #7, and a lot of little moments with she and Bruce. It almost feels like this started as a story where Bruce passes the torch to her, but plans were changed when Miller decided he wanted to do a fourth story. I have nothing concrete to base that on. Just a feeling.

Our mini-comic this month is Dark Knight Universe Presents: Detective Comics. We learn that Bruno, the woman from DKR with the flattop and the swastika pasties, is still alive. We get an incident with her and Commissioner Yindel at a prison, which I assume is supposed to be Arkham Asylum. There’s not much to write home about from a story perspective. But like last month, Frank Miller turns in some surprisingly clean line work. At times he reverts back to more of what he’s given us as of late. We’ll call it “disproportioned.” But by and large, Miller carries his end here.

But man oh man, I wish things would end here. Compared to The Dark Knight Strikes Again and All Star Batman and Robin, DKIII is pretty harmless. But from an artistic perspective, it hasn’t been enough to justify dragging the DKR stuff out of the mothballs.

One thought on “A DKIII: The Master Race #8 Review – Kryptonians vs. Amazons”