You wouldn’t know it by watching WWE TV lately, but Finn Balor is back in action. He made his official in-ring return at a house show on March 10.

There’s been speculation about Balor being back for Wrestlemania since he was forced to relinquish the Universal Title back in August. Now, less than two weeks out, it appears that’s not the case.

It’s bittersweet, but for the best as far as I’m concerned. Wrestlemania is always so damn crowded. If you count the yet-to-be-made-official Triple H vs. Seth Rollins, the card already has 13 matches. And there’s always the potential for more. Guys like Samoa Joe and Sami Zayn are already lost in the shuffle. There’s no need to throw Balor in there, only for him to have nothing of consequence to contribute.

Balor seems almost a certainty for the night after Wrestlemania. The slate will be relatively clean, and his return will get the emphasis it deserves. I’m sure they’ll want to bring him back as a babyface. But if they decide to go the heel route, Balor vs. Rollins would be pretty natural. There’s been all this talk about Rollins missing Wrestlemania. But from a story perspective, he cost Balor his very first Wrestlemania. Something to think about… 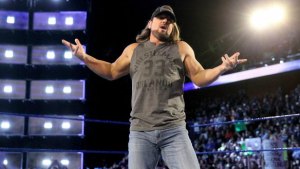 AJ Styles accepts Shane McMahon’s challenge, promises to face him in the parking lot later in the show. “Without AJ Styles, Smackdown Live plummets.” He’s not entirely right, but he’s not entirely wrong either. Something to keep in mind with all this buzz about Styles possibly going to Raw after Wrestlemania.

Mauro Ranallo absent from Smackdown for the second week in a row. Something’s not right here. A one-week absence? Sure. But two is suspicious. Tom Phillips said Ranallo was “out sick.” I don’t buy it. Your lead play-by-play guy doesn’t just vanish two weeks before the biggest show of the year. Either WWE has made a change, or something’s up with Mauro. Here’s hoping everything’s alright.

The Usos def. American Alpha to win the WWE Smackdown Tag Team Titles. Wasn’t expecting this. But no complaints on my end. The Usos have found a lot of new life since turning heel. They deserve this.

Familiar format here, with Gable selling, Jordan getting the hot tag, and then going into false finishes. But again, no complaints. Really good match. Tons of explosiveness. These guys supplied the hell out of each other. 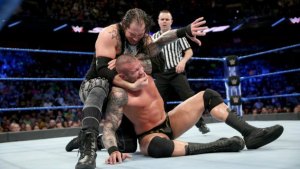 Randy Orton def. Baron Corbin. Dean Ambrose distracts Corbin during the match, accepts challenge for Wrestlemania. These two weren’t bad together. They’ve got similar attitudes. There could easily be a program here someday. Thankful Corbin didn’t get beat clean, as he did by Cena several weeks ago. There was no need for that then, and there was no need for it here.

That little salute Orton gave to Ambrose before pinning Corbin was a nice touch.

Bray Wyatt, along with several henchmen in sheep masks, ambush Randy Orton backstage. Wyatt thanks Orton for “purging” him of his one flaw. The sheep mask thing is usually going to work, because it’s spooky and weird. Bray’s laughing was back this week, though. A bit more appropriate this time, but I still wish he’d have more of a deadly serious attitude about Orton. The guy did burn down his house, after all.

Tyler Breeze had to sell a spear and a Rack Attack from Nikki here. As if the guy’s career on the main roster wasn’t dead enough already. 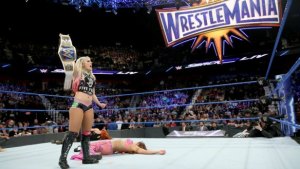 Becky Lynch vs. Carmella breaks down into a no-contest. Natalya, Mickie James, and Alexa Bliss brawl in the ring. Remember all that talk about WWE bringing back former female for Wrestlemania? I’m inclined to think this may have been the match they had in mind. It could still be in the cards, considering we still don’t even know what kind of match these ladies are having.

Eric Bischoff to induct Diamond Dallas Page into the WWE Hall of Fame, Jim Cornette to induct the Rock ‘n’ Roll Express. These should both be really interesting. Bischoff hasn’t been in front of a WWE crowd in quite some time. I imagine he’ll hear no fewer boos than he did years ago. As for Cornette, I doubt he’ll cause much trouble. I doubt he wants to, considering this is for Ricky Morton and Robert Gibson. But type his name into YouTube, and you’ll realize how crazy it is that he’s on WWE TV again.

The Miz and Maryse spoof Total Bellas. Shockingly, these weren’t as bad as I thought they’d be. Though admittedly, I may be biased. I can’t stand to hear the Bellas talk. They come off way too much like Kardashian clones. It seemed like they were plucking lines straight from smark message boards here.

Shane McMahon calls out AJ Styles. A fight erupts, culminating in Shane hitting a top-rope elbow drop through the announce table. That duplex Styles gave Shane into the guard rail was sick. Hell of an appetizer, here. Is this the Wrestlemania match we never knew we wanted?