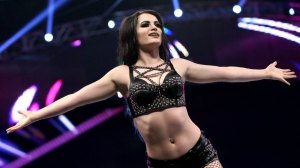 Human beings are so weird.

That was the first thing that came to mind when I read that Saraya-Jade Bevis, known to WWE fans as Paige, was one of the victims of yet another mass celebrity photo/video hacking. Sadly, Austin Watson (Xavier Woods) and Tyler Kluttz (formerly Brad Maddox) can also be seen in the…content. I haven’t seen it. But there’s reportedly quite a bit. We see this kind of thing so often nowadays. I don’t even want to imagine what it must be like. My heart goes out to all three. Particularly Bevis, who was clearly the target.

Something like this tends to bring out the worst in people. Certain wrestling fans can already be a crass, immature group at times. I’ve lost count of all the “Up Up Down Down” jokes I’ve seen on Twitter. I think back to what happened with Lita, Edge, and Matt Hardy all those years ago, and how tough things ended up being for Lita in particular. And this time there’s friggin’ video footage…

People are so quick to judge. But the fact is, Bevis, Watson, and Kluttz are three consenting adults who did nothing wrong. Though you can argue it was foolish of them to tape this. This looks like it’s a few years old. But sex tape leaks and cloud hacks are nothing new. You’d think that as public figures, they’d have been a little more conscious of that. Along those lines, there’s allegedly some footage of the NXT Women’s Title being, shall we say, defaced. They put that on film, for crying out loud. But in the…*ehem*…heat of the moment, your judgment can undoubtedly be impaired.

The reality of it is, Bevis already had one foot out of WWE. She’s already been popped twice for Wellness Policy violations, and she’s engaged to Alberto El Patron (formerly Alberto Del Rio), who happens to be the World Champion over at Impact Wrestling right now. This obviously complicates things further. While neither she nor Watson deserve to be fired over this, if she still has any desire to wrestle for WWE, she might be better off going her own way for awhile. To say the least, being a full-time wrestler for WWE is a demanding job. Until this blows over it’s just going to make it more difficult. If her heart’s not in it, she shouldn’t be doing it.

Again, my own heart goes out to all three of the victims here. I hope whoever leaked this stuff gets what they deserved.

After a public “apology,” Mick Foley gets fired by Stephanie McMahon. Sami Zayn comes out to defend him, gets put in a match with Samoa Joe. This was a nice spot for Zayn to be in. Definitely a big character moment for him. Hopefully he continues to establish himself as an anti-establishment underdog after Wrestlemania comes and goes. At this rate, I imagine he’ll just be in the Andre Battle Royal.

And so it seems Mick Foley’s time as the general manager of Raw has come to an end. This run from Foley obviously had it’s share of problems, the biggest of which was him having to recite WWE’s heavily scripted dialogue. Foley was, and is, a performer that can incite a heavily emotional response from audiences. Doing that using someone else’s words is difficult. Most of the time, that stuff comes from your gut and from your heart. Nobody wrote those ECW promos for Cactus Jack all those years ago. That’s not to say he can’t shoulder some of the blame. But in many ways, Mick was out of his element here. 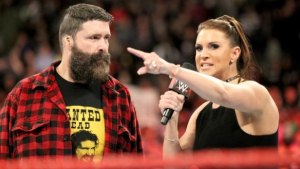 I think Foley is often put in these authority figure roles in the hopes of re-creating the magic of his time as WWF Commissioner in 2000. Foley has often said he wishes he’d stayed in that position longer. But frankly, I think it ended at just the right time. He left us wanting more, and clearly it’s left a lasting impact.

Regardless of what anyone thought of Foley’s time as general manager, he remains one of my favorite pro wrestlers of all time. To me, he has always been passion personified.

Samoa Joe def. Sami Zayn via submission. Joe with that damn dive through the ropes to the outside. Not sure why they felt the need to have him do that. We so many of those dives, at this rate the Big Show will be doing one next.

Charlotte Flair def. Dana Brooke. They could easily have put Dana Brooke into the Women’s Title Match at Wrestlemania by having her beat Charlotte here. Thankfully, that didn’t happen. Wrong place, wrong time for Dana. I’m interested to see how she does on her own from here on out. But I don’t have high hopes.

Chris Jericho exposes the “real” Kevin Owens on the Highlight Reel. Owens ambushes him, rips up the List of Jericho. Damn. He ripped up the list. That clipboard is more over than most of their roster… 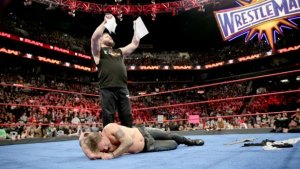 As was the case when Owens slammed Jericho’s head into that sign a few weeks ago, there were shades of Jericho vs. Shawn Michaels here. Only this time, we have to go all the way back to Wrestlemania XIX, when they did that story about Jericho idolizing Michaels as a youngster. This struck a similar chord.

Incidentally, notice that Darren Drozdov figure in the photo of 16-year-old KO? I still have that. Why I have that one as opposed to certain others, I have no idea. But it’s somewhere in my home right now.

Brian Kendrick def. TJ Perkins. Afterward, Kendrick reveals he’s stolen Akira Tozawa’s passport. Not much of a match here. Though he focal point was obviously the furthering of the Kendrick/Tozawa story.

They did another episode of Bring It to the Table after Raw last week, on which JBL and Corey Graves both expressed that 205 Live isn’t the show if should be right now. The emphasis, they said, should be more on action and less on the gaga and entertainment aspects. I can’t say I disagree. I was just surprise to hear them say it.

Nia Jax def. Bayley in a No Disqualification Match to earn a spot on the Raw Women’s Title Match at Wrestlemania. No surprise here. A Fatal Four-Way between Bayley, Charlotte, Sasha Banks, and Nia Jax has been rumored for weeks now. All I can say is I hope Nia doesn’t win it. If I had to pick now, I’d say Bayley retains. But it seems like it’s up in the air.

Triple H: Seth Rollins can compete at Wrestlemania  if he signs on for a Non-Sanctioned Match. So there it is. Seth Rollins is going to get physical at Wrestlemania. It’s been somewhat evident for awhile now, especially after last week. But it’s nice to see this officially put on the table. As unfortunate as Seth’s injury was, it gave them a cool story to tell. It put him in a hell of a babyface spot.

The CM Punk chants were out in full force again this week, during both Hunter and Stephanie’s segments. @ProWrestlingMag on Twitter, who I tend to disagree with half the time, made a valid point during the Stephanie/Zayn stuff: “Maybe chant for SAMI instead of CM PUNK. Idiots.” Fair point…

Cesaro and Sheamus def. Luke Gallows, Karl Anderson, Enzo and Cass in a handicap match to retain their spot in the Raw Tag Team Title Match at Wrestlemania. Happy to hear the announcers point out how seemingly illogical it was that Gallows and Anderson attacked their partners at the top of the match. The idea was if Sheamus and Cesaro lost, they’d lose their spot at Wrestlemania. I understand “emotions running high,” or whatever. But the champs looked downright stupid here.

Austin Aries def. Tony Nese. Neville confronts Aries after the match. In a very short time, Aries has established himself as Neville’s most credible challenger yet. If they give these two enough time, they could be a dark horse candidate to steal the whole show. 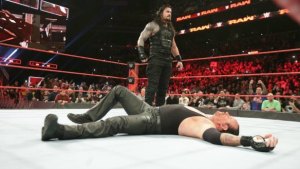 The Undertaker interrupts the main event between Roman Reigns and Braun Strowman. The Dead Man chokeslams Strowman, but eats a spear from Reigns. Undertaker took some flack for looking old after hitting Strowman with the chokeslam. Hey assholes, Strowman’s got to weigh over 350 lbs. Undertaker had hip surgery less than a year ago. Do the math. I’m actually surprised they did that spot.

They didn’t follow up on Reigns’ retirement comment from last week. I half expected the Wrestlemania bout to become a Retirement Match. You’d think if ‘Taker’s career were truly about to end, they’d promote the hell out of it. This week was the absolute latest you’d want to pull the trigger on that…right? Let the speculation continue, I suppose.