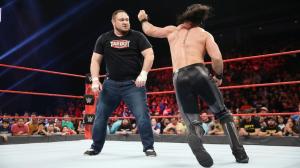 Not much use in leading with anything but Samoa Joe, is there?

What we saw on Raw was over a decade in the making. After so many years of speculation as to whether he’d even be considered by WWE, Samoa Joe finally arrives on the main roster. What’s more, he’s going into a program with one of their top stars in Seth Rollins. I can’t even tell you how surreal it was just to hear Michael Cole say Joe’s name.

Many were disappointed that we didn’t see Joe in the Royal Rumble Match on Sunday. Would I have put him in there? Sure. That way the mainstream audience has a better idea of who he is before he shows up here. But then again, does that chip away at the surprise element? If Joe is in the Rumble, maybe this moment isn’t quite as special.

Either way, this was about as good a debut as we could have wanted for Samoa Joe. After years of stealing the show elsewhere, he finally gets to do it on wrestling’s biggest stage. Congratulations, good sir. You deserve it.

Kevin Owens and Chris Jericho open the show. Braun Strowman demands a title shot. Mick Foley announces Owens will defend against Strowman later in the show. Decent opener. The best part of this segment was Strowman demanding his shot, “or I’ll break you in half.” You know what? I believe him.

Interesting that Mick Foley came to Raw dressed as the Riddler. Where exactly does one get a suit like that?

Sami Zayn def. Chris Jericho. Supposedly Jericho’s current run will wrap up in May so he can go back on tour with Fozzy. Some have said this has been the best run of Jericho’s career. I wouldn’t go that far. But it’s definitely up there. He’s consistently been one of the best parts of Raw, and the show will miss him when he’s gone. The guy is 46 and he can still hit Sami Zayn with a Frankensteiner (shown right). Amazing.

This was good stuff. For the second consecutive week, Zayn is in the best match on the show. Really dug the exploder duplex into the corner. I still wish he’d start beating people with the Blue Thunder Bomb. It’s his best move.

Mustafa Ali def. Tony Nese. Raw needs more of both these guys. I adore Ali’s reverse 450 splash. It’s a damn shame we didn’t get to see it this week. It’s also a damn shame that the fans still don’t give a damn about the Cruiserweight Division. Maybe one of the reasons Neville’s run in the division has worked so well is that we’ve known him the longest. Most of these other guys are still working to establish themselves in front of the national audience. Rich Swann and Jack Gallagher have started to do it. But that’s it.

Seth Rollins calls out Stephanie McMahon, who announces Triple H is on his way to Raw. This seemed very choreographed and scripted, as these talking segments often do. Still, I love how irreverent Rollins is toward Stephanie. While much of his dialogue still comes off contrived, it’s refreshing. No one has talked to her this way in so long. 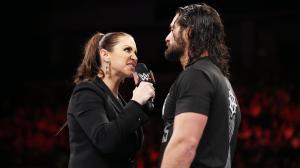 Having him mention coming to her front door and having one of their kids answer was a little edgy. I get why they did it. It makes the whole thing more personal. But I’d avoid approaching that topic again. Even Stone Cold never talked about going after little kids…

Bayley, Cesaro, and Sheamus def. Charlotte Flair, Luke Gallows, and Karl Anderson. This one didn’t do anything for me. Once again, Bayley pins Charlotte. She’s somehow unbeatable on pay per view, but extremely beatable on television.

The new Cruiserweight Champion Neville addresses the crowd. Rich Swann interrupts. Scripted promos can work if you present them believably. You forget they’re saying lines. Neville did that here. Where the hell has this guy been? Pissed off Neville is the best Neville.

In contrast, any time somebody says “WWE Universe,” any integrity the scene has is lost because no one would actually say that in the heat of the moment. Sorry Rich.

Last night at the Rumble, they showed some pictures of Neville and Swann earlier in their careers. I guess they came up together? Why not go that route for this promo and make things a little more relatable?

Braun Strowman def. Kevin Owens via disqualification after Roman Reigns interferes. After Strowman’s interference in last night’s Universal Title Match, the finish to this one was obvious. I’m happy Owens was able to be a little competitive here, while Strowman was still kept strong against both of them.

Brock Lesnar and Paul Heyman challenge Goldberg to a match at Wrestlemania. A very predictable outcome. But yet another masterful promo by Paul Heyman. The “Yeah, but…” lines worked well.

The mentioning of Hulk Hogan beating Andre the Giant is yet another indicator that Hogan is likely on his way back. They’re planting the seeds.

Nia Jax def. Sasha Banks via referee stoppage. Byron Saxton: “How scary a sight is that? To have Nia Jax smiling, knowing that she’s gonna have her way with you.” That’s not the verbiage I would have used, Saxton…

What happened with the bell here? It rang, but the ref clearly didn’t call for it. Still, Sasha did a fine job putting Nia over, both tonight and on the Rumble pre-show. The full nelson swings into the ring post looked good.

Enzo and Cass def. Rusev and Jinder Mahal in a Tornado Tag Team Match. I’ve got no use for this program anymore. Now that Enzo and Cass won this match, can we please move on?

Triple H: “Seth Rollins was a failure.” Samoa Joe ambushes Rollins. Awesome promo. I actually preferred this one to the Heyman stuff. The spinning of the narrative to where Seth owes him an apology. Hunter calling Seth an abject failure. The stuff about not being “that guy” anymore, and wearing the suit. Awesome. When Hunter is on, he’s on. I just wish we’d gotten this promo months ago, so the whole story didn’t cool off so much.

By and large, this was a strong show. Literally the best they’ve put on in months. Now we have a new face on Raw, and we’ll be seeing some of the bigger stars more regularly. Raw has been tough to watch lately. They didn’t so much fall into an autumn slump this year as a winter slump. But as always, things are picking up as we get closer to Wrestlemania.

One thought on “Samoa Joe Finally Arrives, and Other Ponderings From WWE Raw”