We’ll get to Kurt Angle in a bit. But first, a more somber note…

A matter of days after being cleared of murder charges, Jimmy Snuka passed away on Sunday at 73 years old. He’d been battling stomach cancer for quite some time.

It seems like how you remember Jimmy Snuka largely depends on when you became a wrestling fan. If you were a fan in the ’80s, you probably remember him as one of the first true WWF superstars. He obviously had a very distinct look, and his Superfly Splash from the top rope is one of the most fondly remembered finishes in history. He actually came into the company as a heel, managed by Captain Lou Albano. In a precursor to what we’d see generations later with guys like Steve Austin, he won fans over to the point that they had to turn him babyface. He’d go on to have a very famous Steel Cage Match with Don Muraco in Madison Square Garden that people talk about to this day.

But then there’s the other side of Snuka’s legacy, and the Nancy Argentino story. I invite you to check the story out for yourself. (Here’s Dave Meltzer and Jim Cornette discussing it in detail on Cornette’s podcast.) But to make a long story short, in 1983 Argentino, Snuka’s girlfriend at the time, died of traumatic brain injuries. There were suspicions against Snuka at the time, but he was never charged. When the case was re-examined in 2013, it was revealed that the coroner report detailed Nancy had injuries that were consistent with an abusive relationship. Snuka was later indicted on charges of third-degree murder and involuntary manslaughter. But on January 3 of this year, the charges were dismissed, as Snuka was deemed unfit to stand trial. That’s a controversial topic in and of itself. Over the years, he also reportedly told several stories as to how Argentino allegedly died. 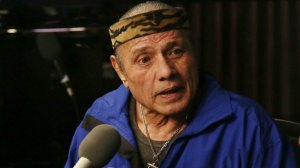 Whether or not you believe Snuka was responsible, there’s a large number of people out there that essentially see him as the OJ Simpson of professional wrestling.

Mick Foley, who was famously inspired by Snuka’s leap off the cage in Madison Square Garden, wrote a lengthy message on Snuka this week. He said he was finding comfort in the words of Bruce Springsteen: “Trust the art, not the artist.” I’m not sure how much I buy that notion. But the fact is, Snuka’s art and his legacy will stand the test of time. He inspired and opened doors for a great many. Whether he deserves all of he adulation he’s getting right now is a matter far bigger than any pro wrestling show.

Roman Reigns, Kevin Owens, Chris Jericho, Seth Rollins, Braun Strowman and Brock Lesnar vie for dominance before Wrestlemania. Sami Zayn ambushes Strowman. Roman says he isn’t complaining about losing the US Title. Why not? You lost your belt, man! Get pissed off! That’s a page out of the John Cena playbook.

This was a nice kick-off to the show, with Lesnar adding some extra oomph. Didn’t expect to see Zayn out there. He was a nice touch.

Enzo and Cass def. Rusev and Jinder Mahal. Happy to see Enzo back in the ring. But I wasn’t any more interested in this match than I was the Cass/Jinder match from last week. I zipped through this one.

They seem to really be embracing Gallagher. I enjoyed him on commentary here. He could stand to speak up a little. But I expect that will come with time.

Footage is shown of Sasha Banks being ambushed earlier in the day by Nia Jax. I liked this. Something a little different. My only complaint is that Nia was in her ring gear. I’d rather she have been in street clothes or Tap Out gear. Something to make it look a little more spontaneous.

Luke Gallows and Karl Anderson def. Sheamus and Cesaro via disqualification in a Raw Tag Team Titles. The titles do not change hands. So Sheamus knocks the ref out on accident, another ref comes down and counts three for Anderson and Gallows, then the first ref reverses the decision and makes it a DQ. I believe this is a “Dusty finish” (as in Dusty Rhodes), where they reverse the decision after a wrestler has already been declared the winner.

Gallows and Anderson have needed rehabbing for awhile. In theory, they’re the top heel team on Raw. But they’ve been beaten so much they haven’t looked like much of a threat to Sheamus and Cesaro. This was a step in the right direction. But I still don’t see them taking the belts.

Neville attacks Rich Swann before a match. Neville has quickly become the most interesting guy in the Cruiserweight Division. It certainly helps that, unlike most of the wrestlers in that division, he was around beforehand. Decent promo afterward. 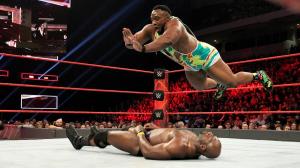 Big E. def. Titus O’Neil, retaining his spot in the Royal Rumble Match. In the pre-match skit, Big E actually said to Titus: “No more showing up at our porch with fake mustache and a pizza box with a hole at the bottom.” Holy crap. If he got heat for cracking a joke about all of Charlotte’s title wins, I can’t imagine what he’s going to get for that.

Charlotte digs up Bayley’s old photos and poems. I liked this segment a lot. I feel like we got to know Bayley more here than at any point since her main roster debut. When they brought her up, hey seemed to take for granted that a lot of viewers already knew who she was. They can’t afford to do that. We made up for some lost time here.

Cedric Alexander def. Brian Kendrick. Alicia Fox comes to ringside for the match. What did Graves call that move where Kendrick’s knees went right into Kendrick’s head? A springboard slingshot moonsault? Either way, it looked like it hurt like hell. So Cedric and Alicia are broken up now, which mean she’ll likely end up with Noam Dar at some point. I’m mildly curious to see how they match up as a pair.

Kevin Owens, Chris Jericho, and Braun Strowman def. Roman Reigns, Seth Rollins, and Sami Zayn. They’re really struggling with this Raw main event scene right now. There’s this awful, boring, sameness to everything week after week. All I could think of during this match was, who cares? There were no stakes or consequences. It was just another match.

Perhaps this needs to be a rule: Having main event level guys in a match it doesn’t make it a main event.

Kurt Angle announced for WWE Hall of Fame Class of 2017. This one came way out of left field. There’d been some buzz about Angle coming in this year. But I think most of us assumed it would be for a big match. But this was a genuine surprise. Kudos to WWE for keeping a lid on it.

While the announcement itself is a shock, Kurt Angle going into the Hall of Fame has been an inevitability for over a decade now. It was just a matter of when. Angle was one of the greatest mat wrestlers the company ever saw. But Michael Cole really nailed it when he called him “one of the great entertainers” in WWE history. I remember watching Kurt’s first nationally televised match at Survivor Series in 1999. He was entertaining from the start. It was plain as day that he had that undefinable “it” factor that you need to be a WWE star. I would estimate he succeeded beyond anyone’s imagination.

Angle had so many great matches in WWE. But off the top of my head, these are a few essentials to check out…

– Summerslam 2001 against Steve Austin.
– Wrestlemania XXI against Shawn Michaels (my personal favorite).
– Royal Rumble 2003 against Chris Benoit.
– No Way Out 2006 against the Undertaker.

One thought on “Kurt Angle’s HOF Shocker, Plus Ponderings From WWE Raw”