It’s fitting that Justice League vs. Suicide Squad is DC’s last big release of the year. This is essentially a snapshot of the Warner Bros/DC movie playbook for 2016. Of course, it’s a also hook for new readers who’ve seen the movies.

And in a very pleasant development, Justice League vs. Suicide Squad is pretty damn good. At least, so far.

When the Justice League learns of Amanda Waller’s Task Force X program, they interrupt a the Suicide Squad’s latest mission to bring them in. Naturally, Deadshot, Harley Quinn, and the team aren’t coming without a fight. Meanwhile, several prisoners have been broken out of the Catacombs, “the most top secret prison in the world.” A threat is emerging that may give the Justice League and the Suicide Squad a mutual enemy.

I think one of the reasons this story works so well is that there isn’t an exorbitant amount of exposition to get through. Yes, we have the typical captions that introduce the characters (i.e. “Deadshot. Expert marksman. Has a death wish.” We also have a two-page scene where the League finds out about the Squad, and we go over why they don’t like them. But other than that, we’re mostly doing the business of the plot. It’s easy to understand why these two groups wouldn’t get along. You don’t need all of the build-up and the layers you would for, say, Civil War or Avengers vs. X-Men. The mere knowledge of the Squad’s existence is enough to prompt a fight.

The only downside to that additional time for character moments is that Williamson’s use of Captain Boomerang for comic relief comes off grating. One thing this book hammers home as much as anything is that ol’ Digger is horny as hell. I guess it makes sense, given he’s in prison. Plus, whenever he goes out he’s got the over-sexualized Harley Quinn with him. But he doesn’t need to be Captain Innuendo. We also have a little exchange where Simon Baz asks, “Aren’t boomerangs a little lame?” Not nearly as lame as that line. Way to go, Simon. Antagonize the murderer who Flash just told you was no joke. 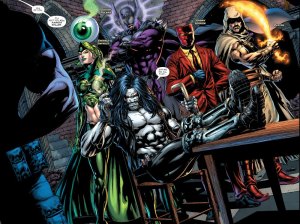 The larger story Williamson is setting up involves a third team, led by our mystery prison breaker…the returning Maxwell Lord, dressed in his Omac Project and Justice League: Generation Lost era garb. Per usual, Lord is hardly a mustache-twirling villain. He’s out to save the world. What that means exactly remains to be seen. But the team he’s assembled (shown below) consists of Lobo, Dr. Polaris, Emerald Empress, Johnny Sorrow, and Rustam. Certainly an…eclectic crew. But they all have one thing in common: They hate Amanda Waller. Considering how expansive the cast of this book already is, we can’t guarantee all these characters will get a chance to shine. But I can definitely appreciate Williams putting a renewed spotlight on some of the company’s more obscure characters.

Jason Fabok is in top form here. As I’ve said previously, his is art has an undeniably epic quality to it. So he’ll always be a solid fit for big event stories like this, or Darkseid War. I compare him to Jim Lee, Andy Kubert, or Ivan Reis in that sense. He’s very much like Lee in the way he makes use of splash pages and two-page spreads that are either explosive, or have a lot of intrigue. His characters also tend to be very charismatic and expressive. Particularly Harley Quinn, despite the over-sexualization. There’s also a really nice splash page where Superman catches Deadshot in mid-air. Those two characters are such a great contrast. That image almost sells the premise by itself. 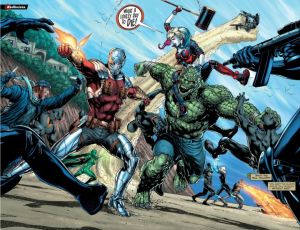 By the way, the country that the big confrontation takes place in is called Badhnisia. I was blown away when I typed that into the ol’ Google machine, and found out it’s actually a long standing country in the DC Universe. A little on the nose, don’t you think?

Based on the solicitations, it looks like the artistic teams on this book will fluctuate as the weeks go by. We’ll see names like Fernando Pasarin, Robson Rocha, and Howard Porter tag in. I can’t say I’m looking forward to those transitions, especially given the quality of what Fabok and his cohorts gave us here. But from a plot perspective, Justice League vs. Suicide Squad starts out strong. Now it becomes a matter of telling a compelling story while balancing all these different characters, and not letting it all become a mess.