If you’re only picking up one Marvel book these days, make it Champions. It’s fun, diverse without trying too hard to be, and particularly poignant these days. This issue’s subject matter might make some readers uncomfortable. But I suspect that’s the idea. It’s a book about young people coming together to take on problems that are at least partially based in reality.

Champions #3 takes on Islamic fundamentalism. It brings our team to the middle east to face a militant group committing gender apartheid. In the issue’s own words: “They believe  women are to be shamed. TO be hidden away, given no access to medical care or education. To be stripped of their human rights. … Young girls have been murdered in the streets for the ‘crime’ of carrying a schoolbook or being seen without a burqa.” Our heroes stand up for the defenseless, all the while trying to figure out who their team leader is.

When you consider how reality-based a lot of this stuff is, it becomes pretty powerful, and rightfully uncomfortable. We open the book with a splash page of a textbook on the ground, splattered with blood (shown right). There are no captions or dialogue on the page, as none are necessary. We later get images of women gathered together, talking about not giving into extremism, standing up for themselves, being killed for reading books. We’ve also got groups of men carrying guns, saying things like “We are divine messengers! You will not make fools of us in the eyes of our lord!”

Some people don’t like this kind of thing in their superhero escapism. Case in point, Chelsea Cain getting harassed by Twitter trolls over her work on Mockingbird. But there’s also something to be said for what these characters stand for. Not just the Champions, but superheroes in general. Things like truth, justice, defending the defenseless, etc. So using superheroes to illuminate real world issues doesn’t usually bother me, so long as it’s done well. You can argue this issue lays it on thick at times (judge the how and where for yourself). But its heart is definitely in the right place. It gets you thinking. Ergo, it accomplishes its goal.

Waid also weaves in a little teen drama, following up on the Hulk/Viv kiss from last issue. It’s not much, as we get into the main story pretty quickly. But it’s something they can circle back to later. I’m still not sure how the physics of that kiss were supposed to work…

There’s also a question of who the team leader is supposed to be. For my money, the obvious choice is Ms. Marvel. But the issue also floats Hulk and (perhaps in jest) Cyclops as candidates. I’m hoping the conclusion we come to here is that the Champions don’t need a leader. But you never know.

Humberto Ramos continues to surprise with this series. His exaggerated, cartoony style doesn’t seem like a good fit for our super-serious main story. But in a way, he may be the key to why this issue works so well. Obviously, this is some heavy subject matter about things that happen to real people in the real world. But Ramos’ cartoony, exaggerated figures allow us to still see it through the lens of a superhero comic. This doesn’t feel like a contrived PSA comic, but rather something that actually occurs organically in the Marvel Universe we know. Perhaps more importantly, if you jump completely out of the fantasy realm with a story like this, you risk losing your audience by slapping them too hard with this brutal reality. Ramos’ art is a nice compromise. 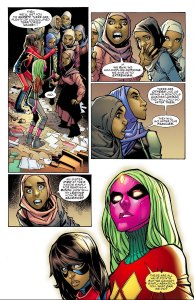 What’s more, Ramos hits the right notes to make us feel what the story needs us to feel. We’re frightened, sympathetic, and angry for these women who’ve been victimized for no good reason. The gravity of the situation is conveyed effectively, and we’re hopeful for them in the end. Of course, the superhero action stuff is done very well, and Ramos is always good at interactions between the teens. There are some awkward character placements and panel transitions early on during a scene on Hulk’s big stealthy jet thing. But that’s a con far outweighed by all the pros.