Let’s briefly touch on a few things from TLC before we get into Raw.

The finish to the AJ Styles/Dean Ambrose match was obviously going to involve James Ellsworth. Literally everything those two have done these last several weeks has involved him. Why wouldn’t this? So they were setting this up by having Ellsworth get all those fluke wins over Styles. Now he thinks he can beat Styles for the title. So does this constitute a heel turn for Ellsworth? That’s an odd choice, isn’t it?

Surprised to see Alexa Bliss take the Smackdown Women’s Title. Personally, I wasn’t ready to see Becky Lynch give it up yet. But given the quality of her work lately, Alexa is perfectly deserving. Congrats to her.

Bray Wyatt and Randy Orton took the Smackdown Tag Titles, which I didn’t expect, but probably should have. This stuff with Wyatt, Orton, and Luke Harper has been a breath of fresh air these last few weeks. Maybe we’ve got something here…

Seth Rollins: “I want Triple H.” Nice to see Rollins make this little declaration. Now he officially has a goal that’s different than anyone else’s.

Dear God. You talk about contrived dialogue. Now, everyone has to call it Roadblock: End of the Line every single time. That’s like calling it Star Wars: Episode VII – The Force Awakens every time, as opposed to just The Force Awakens. It doesn’t get much more lame than that.

Seth Rollins def. Big Show by count-out. This was the first time we’d seen Big Show in a few months. He’s obviously a bit thinner now. Hopefully he’s not back on TV weekly. Rumor has it he’s facing, of all people, Shaquille O’Neal at Wrestlemania. Until it’s time to hype that match, I’m not interested in seeing Show on TV regularly. It wasn’t long ago he was one of the most overexposed guys in the company. Let’s go the opposite way.

Jack Gallagher def. Ariya Daivari. A decent outing for these guys here. But if you want a better one, check out last week’s 205 Live. Very happy we’re seeing Jack Gallagher on the main roster. I’m still getting acquainted with him. But he’s so damn smooth out there.

I’m not sure I’ve seen Daivari win a single match since he’s been in WWE. At least he got to show some personality after the match. 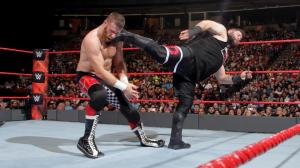 Kevin Owens def. Sami Zayn. Even when he’s on a losing streak, Kevin Owens can still beat Sami Zayn. Just like everybody else. Good match from these two as always, though.

Rich Swann def. TJ Perkins. The Austin rowd was sitting on their hands for most of this one. Really cool to see Swann is using that spin kick as his finish. Seeing Perkins jump into one from the top rope was sick.

Bayley def. Alicia Fox. Crazy Alicia Fox is the best Alicia Fox. That wild charisma can be a breath of fresh air. On the other hand, it can be grating. It just depends on the night.

Mark Henry beats Titus O’Neil in less than a minute. We’re in Lesnar/Goldberg territory on this one. And they didn’t even have to shell out the millions they’re paying those two.

Roman Reigns def. Chris Jericho to retain the United States Title. A fine match here, with Owens accidentally costing Jericho the title. I can’t help but think this souring of the friendship between Owens and Jericho is off a step. Either they waited too long, or the impetus for the turn (which we saw last week) wasn’t strong enough. Maybe both?

Lana lures Enzo into a trap. For the second week in a row, they take the cameras outside the arena and break things up a bit. This was cool, though it was obviously a trap. Even WWE themselves tweeted the ol’ Admiral Ackbar “It’s a trap!” gif.

Kinda cool that Enzo was a babyface and backed off sleeping with Lana. He might be the most natural talker on the active roster. So he can pull off some of the contrived written dialogue in situations where most guys can’t. If there was anybody to put in this scenario, it’s him.

Some people are calling “not PG!” on this. But compared to some of the stuff they did with Mark Henry all those years ago, or Torrie Wilson and Dawn Marie on Smackdown, this looked like Disney Junior.

After a double count-out finish, Gallows and Karl Anderson, as well as Cesaro and Sheamus will face the New Day in a triple-threat tag match next week. If the New Day wins, they break the all-time record set by Demolition. It seems like they’re setting it up for Cesaro and Sheamus to win the belts. But it could go either way. Not Gallows and Anderson, of course. But any other way.

Sasha Banks challenges Charlotte Flair to a 30 Minute Iron Man Match at Roadblock. Charlotte feigns an apology to Ric Flair, then smacks him, and beats up Sasha. Last week I compared this Charlotte/Sasha Banks program to the one John Cena and Randy Orton did in 2009. Fittingly enough, those two also followed up a Hell in a Cell Match with an Iron Man Match. Go figure. 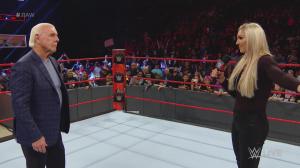 On the subject of predictions, let’s go ahead and call this: Ric turns on Sasha at Roadblock, giving Charlotte the belt back. The Sasha/Charlotte pattern continues. On the plus side, Charlotte has become one of the most entertaining talkers they have. Pretty natural, too. Not quite on Enzo’s level. But at times she’s close.

One more time, ladies. Then its time to find new dance partners.

2 thoughts on “Charlotte and Sasha Banks Keep Going, and Other Ponderings From WWE Raw”