This is getting a little silly, isn’t it?

Understand this: These two have really good matches. Risky. But still good. Some of the hype WWE spews about the “women’s revolution” is actually true, and much of it can be attributed to these two. They were the first women to main event a WWE pay per view. Ever. That alone gives them a place in history. Then you factor in all their talents, and the body of work they’ve put together. It’s awesome.

That being said, duration does not an epic feud make.

In 2009, WWE did John Cena vs. Randy Orton at four consecutive pay per views. They did a straight one-on-one match, an “I Quit” Match, a Hell in a Cell Match, and an Iron Man Match, all for the WWE Championship. And this was after they’d wrestled sporadically over the years. They build it up as the epic, mother of all feuds. But it wasn’t. The matches were good, but by no means was it a bitter rivalry for the ages. They just wrestled over and over again. They would continue to wrestle on and off over the years. It’s gotten to the point where the idea of another Cena/Orton match makes me wretch. 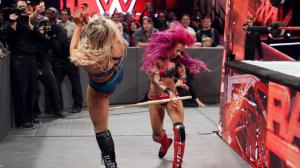 I’m nervous we’re venturing into that kind of territory with Charlotte and Sasha. Yes, they’ve been great together. But they should have taken a break after Hell in a Cell. Like Cena and Orton in 2009, they’re being forced to continue because of a lack of depth on the roster. They desperately need a few more ladies on Raw. I’m looking at you, Mickie James. I saw that Takeover match…

Charlotte and Sasha are probably going to wrestle again at Roadblock. If they must, then they must. But let that be the end of it. Don’t make us tired of seeing these two work. They’re too damn good together for that.

Kevin Owens appears on Chris Jericho’s Highlight Reel. Roman Reigns interrupts, and a match is made between Owens and Reigns. The energy in this segment was off. I hate to keep harping on this week after week, but it’s the scripted promos. These guys are trying to remember dialogue, and it drags these talking segments down so much. When Owens yelled at Jericho, it wasn’t nearly the moment it should have been because it didn’t feel natural.

Braun Strowman def. R-Truth. Strowman brutalizes Sami Zayn afterward. I’m becoming a Braun Strowman guy. He’s not the best wrestler you’ll see out there. But he’s a giant ass kicker, and he’s being booked like one. This thing with Sami Zayn has been good for both men thus far. It’s the classic David vs. Goliath story. But in the context of what we’ve seen on Raw these last few months, it feels fresh.

Mick Foley tells Sami Zayn he can’t beat Braun Strowman. Zayn calls Foley a hypocrite. Yikes. Foley’s bottom teeth came out in the middle of that promo. He glossed over it better than I thought he would, though. The live crowd didn’t seem to notice.

Again with the scripted promos. Nobody says “How dare you.” Sami Zayn certainly wouldn’t say it in the heat of the moment. Still, the segment helped establish Zayn’s underdog status, which enhances the program with Strowman. So it worked for me.

Tony Nese def. Cedric Alexander. Nice win for Tony Nese, though it sucked to see Cedric lose in his hometown. I’m mildly encouraged that they’re apparently starting a story with Cedric and Alicia Fox. He’s been on and off of Raw, and hopefully this gives him something consistent to do.

Seth Rollins ambushes Chris Jericho in the parking lot. I liked this. It feels like we haven’t had a nice backstage fight in awhile. The pedigree on the car was a cool stunt, and Rollins seemed legitimately pissed off.

Enzo Amore def. Rusev via disqualification after a low blow. Not much to say about this one. I assume they’re building to a match between Rusev and Big Cass at Roadblock.

Rich Swann def. Noam Dar. Hell of a sound on that kick that ended the match. Not a bad post-match promo, either. Still, I don’t see Swann walking out of 205 Live with the belt.

A bar fight angle airs with Sheamus and Cesaro.  From an acting standpoint, Sheamus and Cesaro were mostly okay here. But good lord, everybody else was awful. So I guess these guys are friends now? Cool. Like ’em or not, they’re your next tag champs.

Roman Reigns def. Kevin Owens to earn a Universal Title Match at Roadblock. This match had already been advertised locally, so some of us knew it was coming. Having Reigns in the main event of Roadblock is fine, I guess. But it makes it that much more evident how much this show misses Finn Balor.

Paul Heyman: Brock Lesnar will be in the 2017 Royal Rumble Match. Heyman dropped an F-bomb! “This guy’s a f*#$ing relic.” God damn. I love this guy so much. And were those tears in his eyes?

The simplicity of Cole’s first question to Heyman was a nice touch. Just, “What happened?” Nice. 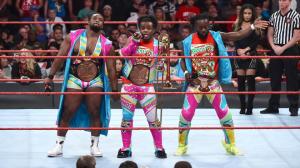 The New Day def. Luke Gallows & Karl Anderson  to retain the Raw Tag Team Titles. Oh c’mon. You knew it wasn’t going to be Gallows and Anderson. How many big matches have these guys lost to the New Day?

So the champs have had to cheat to win these last two weeks. Does that lead to somebody giving them their comeuppance before they break the record?

Sasha Banks def. Charlotte Flair in a Falls Count Anywhere Match to win the Raw Women’s Title. A few notes on this match. Or matches, if you count the first one that ended in a double count-out.

At about the 1:04:43 mark on the DVR, Sasha literally smacks Charlotte in the right boob. Ouch. I get what she was going for. The whole Ric Flair chop thing. But still, ouch. Sasha also heard some boos from the Charlotte crowd. Not used to that.

Not sure when the last time we saw a weapon used in a women’s match, especially since the PG era began.

That was a cool image of Sasha bending Charlotte back over the railing for the win. A nice finale. And the stuff with Ric Flair was a nice pay-off to her dumping him a few months back. A nice note to end the feud on. Now if only they’d actually end it, and let both ladies move on.

One thought on “Sasha Banks Strikes Again, and Other Ponderings From WWE Raw”