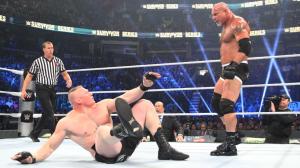 I’ll say this much: We didn’t see that coming. No sir, not at all.

Goldberg beats Brock Lesnar with a shove, two spears, and a jackhammer. It was reminiscent of a Ronda Rousey fight, in that you could literally show most of the match in an animated GIF on Twitter. Perhaps more importantly, Brock Lesnar was pinned for the first time since Wrestlemania XXIX. He broke the Undertaker’s Wrestlemania streak, he victimized John Cena, he split Randy Orton open, and then he lost to Goldberg in about a minute.

This almost makes sense. Goldberg is about 50 years old, he tweaked his shoulder last Monday on Raw, and he wasn’t exactly known for length Ric Flair-style matches anyway. In a way, they gave us the dominant, take-no-prisoners Goldberg we were all captivated by in the first place. And all that stuff I said about Goldberg coming back just to lose to Brock? Yeah, that’s out the window…

If the idea was to get people talking, mission accomplished. As I type this, fans continue to debate the pros and cons of this move. It was a shocking match that I’m sure people will talk about for years to come. 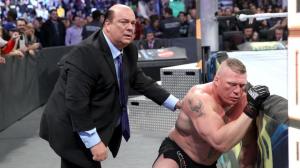 But Brock, man. Reportedly, Brock was all for this, as he and Goldberg are buddies. And I get that this is all part of a larger story. But I can’t help but lament Brock getting pinned. WWE has spent the last two and a half years turning Brock Lesnar into one of the greatest killers they’ve ever produced. You look at all the guys Lesnar has put down, and it seemed obvious that they were saving that first big loss for a newer star. The most obvious name is Roman Reigns. But who knows? It might have been Kevin Owens via dubious heel tactics. Cesaro could have done it, if they ever decided to really get behind him. You’ve also got the man who could very well be their next killer, Braun Strowman. But after all this time…Goldberg? The 50-year-old Bill Goldberg is the one to knock Lesnar off his pedestal?

We learned this morning that WWE has Goldberg signed for the Royal Rumble. Hopefully, that’s where they do the rematch. They need to fill the Alamo Dome, and this rematch can help do it. From there, you have Lesnar win and go on to face whoever his Wrestlemania opponent is. Goldberg, meanwhile, can get one more win against somebody like a Rusev. I assume that’s been the plan all along. And it’s not necessarily a bad plan. You get three big matches out of Goldberg. The first of which is barely a match at all, and it minimizes the risk of injury to a man who hasn’t wrestled in 12 years.

But was it worth it? To not only piss off a lot of fans who watched all that build up and waited to see a fight, but to tarnish what you’ve built with Brock? That’s a big risk. And we won’t know if it paid off for awhile yet. This has implications beyond the Royal Rumble. For all we know, it may effect the remainder of Brock’s run. They may make a lot of cash in the short term. But what a risk… 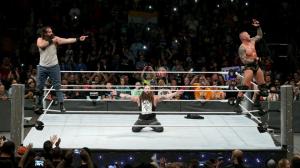 A Few Ponderings From Survivor Series. The 5-on-5 match with the main eventers clearly stole the show. Definitely an unexpected finish at that, with Bray Wyatt and Randy Orton being the survivors. I’d say give Bray a title shot if Smackdown didn’t already have a heel champion.  What’s more, they made solid use of Luke Harper, despite his loss to Kane on the pre-show.

Bray Wyatt has been sitting below the glass ceiling for years now. It’s not necessarily for lack of trying on WWE’s part. He’s been put in big matches with the likes of John Cena, Roman Reigns, and the Undertaker. But they’ve failed to make him feel like a big star for any sustained period of time. Some of that has to do with him losing a lot of his big matches. You can talk about the predetermined nature of pro wrestling all you want. But one of the things that has made Brock Lesnar such a draw for WWE is that he wins. Bill Goldberg became a huge star in the ’90s by winning. The Undertaker became synonymous with Wrestlemania by winning. In contrast, one of the reasons Dolph Ziggler has never broken through to that next level is because he loses. A lot.

Next month, AJ Styles and Dean Ambrose will wrestle for the WWE Championship yet again. As great as those two are together, we’ve seen that match way too much. But with John Cena out right now, they haven’t exactly had a lot of options. It’s to WWE’s advantage to get Bray Wyatt on a role, so he can emerge as a bigger player in the months to come. Perhaps he’ll even be the caliber a star we’ve always known he could be.

2 thoughts on “Goldberg’s Quick Win, and a Few Ponderings from WWE Survivor Series 2016”