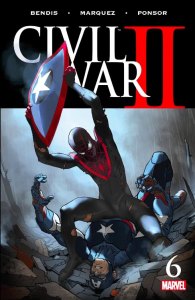 An irony occurred to me after reading Civil War II #6. All this in-story drama and controversy among the superheroes is occurring because a teenager named Ulysses can supposedly see visions of the future. The actions taken by the heroes as a result of these visions have brought about the deaths of James Rhodes and Bruce Banner, the ruining of Clint Barton’s public life, and a lot of bad blood among our characters.

But now it’s all come to a head thanks to a vision of Miles Morales, Spider-Man, another teenager. As if we needed further confirmation that this story is really about the violence we see on the news every day, particularly involving young people.

After last issue’s startling vision of Spider-Man moments after murdering Steve Rogers, the battle between the heroes has come to a stand still. Our characters reel from what they’ve just seen and ponder their next move.

This issue brings us some of the best work David Marquez and have done together. Naturally, much of it involves Miles. The genuinely unsettling two-page spread of Spidey and a dead Captain America is simply re-printed from last issue. I’d normally call that shamefully cheap. But it works to preserve the emotional intensity of the moment.

The page at right is the best in the issue. It shows us Miles’ emotional state after seeing what he did, and is a classic example of showing instead of telling. I love that they took us inside the vision for one panel, and the red smears in the page gutters are a nice touch. Though that actually looks more like paint than blood. I think I had walls that color once…

Marko Djurdjevic’s cover also adds a new dimension to the idea of Miles murdering Captain America. With his own shield? Really? C’mon man.

The reaction that Steve Rogers has to this is important. It’s as big a character moment for him as anybody else. Not surprisingly Bendis gets it right, positioning Rogers as the compassionate moral compass. He then accents it by having Black Panther switch sides, saying that “if you are on Captain America’s side…you can rest easy knowing you are on the right side.”

This, of course, casts poor Carol Danvers as the bad guy. Her protege Ms. Marvel even   stands against her in this issue (Though she’d already done that in the Ms. Marvel ongoing.). Carol has more or less been in the bad guy position the entire time, making her decisions based on events that could happen, rather than what has happened. Perhaps recognizing this, Bendis takes time in this issue to remind us she’s still trying to do the right thing, and doesn’t want to hurt Miles. We see her guilt, and she gets a nice moment of reassurance from Peter Quill. But the violence that’s resulted from all of this is causing her case to fall apart. Kitty Pryde’s expression in the image below says it all.

We get what I imagine was meant to be a bit of foreshadowing for Champions, as Ms. Marvel, Nova, and young Cyclops rally to protect Miles. The delays that have plagued Civil War II obviously tarnish that. But this scene was my first exposure to Riri Williams, who will be taking on the Iron Man role soon. I imagine that’s the case for quite a few readers. So perhaps the upside is worth it.

Civil War II showed up late, in more ways than one. This story just found its second gear last issue, and it finally feels it has the stakes an event comic should have. Hopefully those stakes continue to rise. Toward the end of the issue there’s a spooky page with Ulysses. A descent into evil may be forthcoming.

The question is, does he drag Carol Danvers down with him?