I realized something while watching this show. WWE is doing something they haven’t done in years. They’re thinking ahead in terms of pay per view promotion.

For obvious reasons, we always hear about Wrestlemania. We spend a good portion of the year thinking about it. Where is it going to be? What’s attendance going to be like? What are the big matches? Who’ve they got for Undertaker and John Cena? Things like that. But Wrestlemania is a staple of the WWE brand. They’re always hammering it in as the show to top all shows.

But what about, say…Survivor Series?

For the longest time, Survivor Series has been the red-headed stepchild of the classic WWE pay per views. Never as big as Summerslam or the Royal Rumble, and never even in the same conversation as Wrestlemania. It was always simply the November pay per view that happened to have some gimmick tag team matches on it.

Try this: Off the top of your head, what’s the most recent big Survivor Series match you can think of without Googling? For me, it was The Rock’s return to the ring in 2011, teaming with John Cena against The Miz and R-Truth. A few minutes later, I was able to trace things back to Roman Reigns against Dean Ambrose from last year. 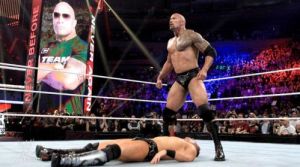 This year, however, they’re upping their game. On this week’s show, not only were they talking about Hell in a Cell in two weeks, but they’re already setting the table for Survivor Series. We’ve got Goldberg coming back for that show, and they’re establishing the Raw vs. Smackdown stuff. In addition, they’re already talking about the Royal Rumble coming back to the Alamo Dome in January.

I’m sure it’s not paying dividends yet, but folks, this is how you get people interested. You give people reasons to care by building things up in advance, and not taking things on a month by month basis. I can’t even tell you when the last time Survivor Series had this much buzz around it, much less when they were talking about the Royal Rumble as early as October.

More of this, please. We have more pay per views than ever, but we can still make the big ones mean something.

Kevin Owens and Chris Jericho open the show. Seth Rollins challenges Jericho to a rematch from last week, which he wins. I was surprised at how hot the Denver crowd was for what was essentially your standard opening promo. It’s a testament to just how good Owens and Jericho are as a duo. Had they put, say, Roman Reigns, Rusev, and Lana in this spot, it would have been business as usual. They even got that “sparkle crotch” line over. 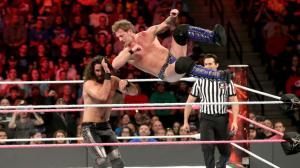 Given the segment we’d see later with Stephanie McMahon, it looks like they’re saving Owens vs. Jericho for Roadblock in December. The crowd is going to pop huge when Jericho tells Owens he’s made the list.

Lita conducts one-on-one interviews with Charlotte and Sasha Banks. I always like when they do this kind of thing. They did it with Seth Rollins a few weeks ago, and it went even better this week. Great intensity from Charlotte. It made me wonder if she was about to cut a promo on Lita. I wouldn’t mind seeing that…

As for Sasha, we all love her. But they need to give her some new talking points. We get it. You wanted this as a little girl. You’re making history. You were with these girls in NXT. You said this stuff every other week. Please move forward.

Big E. def. Sheamus. Sometimes it’s easy to forget how strong these guys are. Big E. literally caught Sheamus in a powerbomb position before slamming him. That should have been the win right there, as opposed to the roll-up spot they went with. Still, now Big E. can say he beat a former four time heavyweight champion in Sheamus. 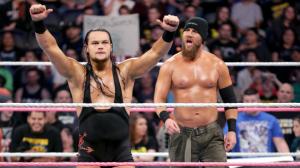 Want to get drunk real fast? Take a shot every time someone said Facebook Live during this segment.

Bo Dallas def. Neville, turns on Curtis Axel. I’m still not into those little poems he recites. But by and large, I’m into crazy Bo Dallas. This begs the question: Why didn’t they do this sooner? Crazy Bo sure as hell beats Social Outcasts Bo.

Dana Brooke def. Bayley. This one was a dud, made worse by a botched finish. Dana Brooke was obviously supposed to get her foot on the bottom rope for added leverage, thus cheating to beat Bayley. But the way it came off she looked like she beat her clean. Sorry ladies.

Paul Heyman addresses Bill Goldberg via satellite. The best part of this promo? Heyman putting that condescending emphasis on the name Bill. “It’s a game, Bill. It’s a fantasy, Bill. Not Goldberg. Bill. That got a laugh out of me.

After winning a three on one squash match, Braun Strowman is challenged by Sami Zayn. Oh Sami, no. I’m so sorry, buddy…

Roman Reigns, Rusev, and Lana have an in-ring segment. Yeah, I won’t lie…I DVRed through this one. Sorry folks, I just didn’t have the stomach for more awkward Roman and Lana dialogue this week. By the time I hit the play button, Roman and Rusev were fighting, and Rusev won. Fair enough.

I understand wanting to maintain the illusion that a six foot tall, 240 lb man can beat up a seven foot tall, 275 lb man. But c’mon, Corey. Don’t say stuff like that. It hurts your credibility, and you’re one of the more credible announcers they have right now.

When I saw Enzo in that pink….whatever that was, it became clear the show was falling off the rails. It’s third hour syndrome, folks.

Brian Kendrick, Tony Nese, & Drew Gulak def. TJ Perkins, Cedric Alexander, & Rich Swann. I like the Brian Kendrick story. But here’s an observation: They keep saying this might be his last chance. But he was given a spot on Raw after losing in the Cruiserweight Classic, and he’s now getting his second opportunity at the Cruiserweight Title. Just saying.

I was looking at Tony Nese and Cedric Alexander in this match. They’re the budding stars of this division as far as I’m concerned. On the flip side, I’m really trying to like Rich Swann. That leaping hurricarana from the mat to the top turnbuckle was amazing, and of course he loves his somersaults. But his on-air personality grates on me. I have no use for the dancing gimmick.

Bill Goldberg returns to Raw, accepts Brock Lesnar’s challenge for a match. As always, Goldberg got a really cool entrance. Nice touch having him walk past some of the current guys. And I’ve got to give it up for that Denver crowd again. I’m not sure I’ve ever heard a crowd chant “Goldberg!” louder.

One of my favorite wrestling podcasters, the Solomonster, talked about this on his show this week: I’m not sure people remember just how big a deal Goldberg was during the Monday Night War. He was a franchise player for WCW. Was he as big a star as Steve Austin or the Rock? Probably not. But everybody knew who he was. And having him back is a big deal for WWE. Against Brock Lesnar, no less.

They made no mention of Survivor Series being the venue for this match, but it’s been widely reported that’ll be where it happens. I’ll reiterate that I’m very interested to see how Goldberg looks compared to Brock.

Goldberg’s proclamation of, “You’re last!” was interesting. That seems to indicate they’re marketing this as Goldberg’s last match. That’s fair enough. Though I wouldn’t be surprised if they were able to squeeze just one more out of him for Wrestlemania. Even if it’s just a spear and a jackhammer.

One thought on “Bill Goldberg, Survivor Series, and Other Ponderings From WWE Raw”