Between NXT Takeover: Brooklyn II, Summerslam, Raw, and Smackdown, we’ve got a lot to cover. There’s too much to go match by match. But lets tackle some of the big stuff. We might jump around a bit in the process, so bear with me…

One night after becoming the first ever WWE Universal Champion, Finn Balor has to vacate the title due to injury. An injury suffered by Seth Rollins powerbombing him into the ringside barricade, much like the career-ending bucklebomb he gave to Sting almost a year ago.

This hurts. For a lot of reasons. Finn Balor relinquishes the Universal title less than 24 hours after he won it. It’s a title that, after being unveiled, received a collective groan and chants of “That belt sucks!” Mind you, they were already being mocked for the Universal Title name.

All this for a belt that waters things down by bringing us back to an era where there are two heavyweight champions.

Good lord…the belt is cursed! What other explanation could there be??

In all seriousness, I’m sorry Finn. Come back healthy. Be the star that we all know you are. 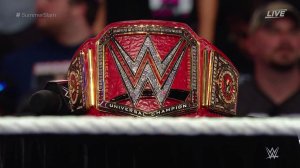 Universal Title design booed by many in attendance at Summerslam. Chants of “That belt sucks!” are heard. Frankly, I don’t see what all the fuss is about. Yes, it looks a little like an accessory for Eva Marie. But we just came out of an era that gave us the spinner belt and the butterfly belt. If you’d swapped either of those out with the Universal Title, I’d have jumped for joy.

Rollins also took to Twitter to gripe about how the Brooklyn crowd “really let me down” with the chants. His frustration is understandable. But those fans paid money to sit in those seats and cheer/boo/chant whatever they want. Look on the bright side. At least nobody jumped the barricade like an idiot…

Seth Rollins, Roman Reigns, Kevin Owens, and Big Cass advance to a fatal fourway match on next week’s Raw to crown a new Universal Champion. Without Balor, Raw will likely now revert back to Roman Reigns being the top babyface. So much for the “new era,” I guess.

Big Cass is an interesting addition to this match. It’s fairly obvious they’re eyeing him as a singles star down the road. But with due respect, he’s not even close to ready. As good as he and Enzo are together, Cass doesn’t exactly look good when you compare them. Yes, he’s a big boy. But as we’ve seen countless times, one can’t make a career on size alone.

AJ Styles def. John Cena in a show-stealer at Summerslam, earns title shot against Dean Ambrose at Backlash next month. Truly, this was AJ’s week. You can make the argument that the match with Cena wasn’t much of a creative effort, as they spent much of it kicking out of finishes. But the crowd reaction spoke for itself. They lit that place on fire. And to WWE’s credit, they made the right move putting Styles over. I’m not sure what’s going on with Cena’s reduced schedule. Either way, AJ’s star has never burned brighter.

Putting Styles with Ambrose next month was really the only choice. Who else could they have gone with? Ziggler again? Not after his clean loss to Ambrose. I’m really hoping this is the start of a heel turn for him. Otherwise, his last chance to be taken seriously as a main venter has been dashed.

Charlotte def. Sasha Banks for the WWE Women’s Title. Banks to take a brief respite from the ring. There were a couple of really scary moments in this match. Sasha took that nasty fall on the ropes, and then you had that really risky crucifix powerbomb spot. It’s no wonder Sasha’s got back problems. The title change was a shock. But if Sasha needs to heal up, it’s obviously the right move.

Bayley makes her main roster debut on Raw after losing to Asuka at Takeover. People have been waiting for this for a long time. Truly, Bayley has the potential to be a one of the biggest stars in all of WWE. Bigger than most, if not all of the men. Bayley’s connection with her fans is truly special. It’s just a question of how they use her.

Shinsuke Nakamura def. Samoa Joe for NXT Championship. I don’t for a second doubt Nakamura’s talent or his star power. But I’m concerned that his English will be an obstacle once he makes it to the main roster. NXT is Triple H’s sandbox. But WWE at large is Vince McMahon’s. This is a huge week for him. But he’s got a great many trials ahead of him.