Even with the movie, the idea of Jim Lee working on a Suicide Squad book seems bizarre. This is the man who broke records with X-Men, set a new standard for Batman, and ushered Justice League into a new era. He’s the master of the modern American superhero epic. He’s synonymous with A-list characters and stories. So to see him work on mostly B and C-list characters is an interesting change. Still, it’s great to see new art from Jim Lee.

Even when he’s drawing Killer Croc nearly drowning in his own vomit.

A rogue Russian state is in possession of a cosmic weapon. Amanda Waller calls in Task Force X, a.k.a. the Suicide Squad to either steal or destroy it. But to avoid detection, the team must drop in from space. But it turns out the squad wasn’t made for space travel…

Our team line-up is the same as the movie’s, minus a few: Deadshot, Harley Quinn, Captain Boomerang, Killer Croc, and the Enchantress. Plus Rick Flag and Katana working directly for Waller. Also, Belle Reeve Prison now has a “Select Your Players” feature, in which inmate containers/cells can be retrieved via crane. There are many, which invites theories about who else Waller could select for the Squad. (Black Manta? Deathstroke?) 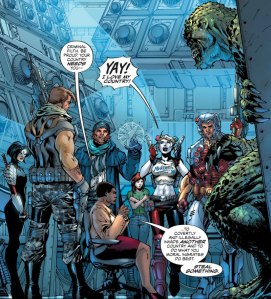 The issue doesn’t let Lee be as dynamic as he often is. We do get a cool group shot of the team (shown left), with Harley wearing a cutesy “Rebirth” t-shirt. But the big action sequence of the issue is the team sitting in their spacecraft as it crashes into the sea. I expected something higher octane, akin to what we saw in Justice League.

The trade off, however, is that we get a nice character moment for Rick Flag, a character conspicuous by his absence in the New 52verse until Suicide Squad: Rebirth #1. Flag was cast as the incorruptible hero with a heightened sense of responsibility for his fellow soldiers. Thus, after Croc gets sick in the spacecraft, Flag undoes his restraints and tries to save Croc from drowning in vomit. This sequence, even more than what we saw in Rebirth, distinctively sets Flag apart from his teammates. He’s loyal to a fault.

Lee also didn’t have as many pages as he usual. DC’s trick for keeping Lee on deadline this time around is reducing his page count, and giving him bulked back-up stories. This issue is about 60% Lee, and 60% Jason Fabok, as we get a story under the banner of “Personnel File: Deadshot.” I can only assume this will be an ongoing theme for the foreseeable back-ups. Predictably, Deadshot’s revamped origin has echoes of the movie. Batman is involved, and we heavily emphasize Floyd Lawton’s daughter Zoe.

Jason Fabok has cited Jim Lee as an influence, so I imagine it’s quite a thrill to for him to have his work next to Lee’s. Comparatively, Fabok’s pages come out more polished and clean, while Lee’s work is a bit sketchier than usual. Fabok’s colorist Brad Anderson works with a darker palette, which fits with the more emotional tone, not to mention much of the story taking place in Gotham City. If Lee’s job is to deliver an action-packed “A” story, while Fabok handles the quieter and perhaps more emotional “B” stories, we may have a winning combo on our hands. In that sense, the contrast in styles works very well.

Question: Why is Katana working with the Suicide Squad all of a sudden? Yes, that’s how it was in the movie. But how did it happen in this universe? Maybe that’s a question for a future back-up.

Also, i guess we’re discarding the whole meta-bomb in China thing from Rebirth? Too bad, I liked that story.

If the object of Suicide Squad #1 is to lure in movie viewers and entice them to read future issues, then I’d call it a mild success. I was left wanting more action on Jim Lee’s end. Whether that leaves newcomers anxious for the next issue, or disappointed overall, remains to be seen. But there’s potential here, and they’ve got me coming back at the very least.