Last week’s Raw was one of the best show’s they’ve had in recent memory. This one, on the other hand, felt more like business as usual. I’m wondering if the reason doesn’t have something to do with a continuous thread throughout the show. A sort of self-contained “spine” story that holds the show together, but also feeds a larger story.

For instance, last week it was all about who would face Rollins at Summerslam. It was decided in three matches spread out over the course of the show. And they made a new star in the process. They weren’t just throwing matches out there.

They did this during the Attitude Era, and it made for great TV. They keep calling this the “new era,” but that doesn’t mean we have to throw all the rules out…

Sasha Banks kicks off the show, is featured in an in-ring segment with Charlotte, Chris Jericho, and Enzo. Charlotte & Jericho win a mixed tag. As cool as it was to have Sasha open the show, the opening skit fell flat. No disrespect to any of these performers. But unless you’ve got really compelling circumstances, i.e. a big return or something, 20 minutes of talking is too long. As such, the match fell a little flat as well.

Couldn’t help but wonder where Big Cass was. My first instinct was that he must have gotten in trouble for something. But he came out for the save afterward. So apparently they just opted to send Enzo out there without him. Enzo was fine on his own, of course.

Kevin Owens was out on commentary in this match for some reason. I’ll never complain about that. He’s got great confidence on commentary, which so many wrestlers lack.

Braun Strowman wins another enhancement match. When was the last time they regularly featured enhancement guys? I’m inclined to say it was with Ryback. In time, those enhancement matches got him over as a juggernaut. How Strowman will do once he’s back in competitive matches is another matter. But for now, this works for me.

Seth Rollins confronts Finn Balor. Let’s face facts: Balor isn’t a strong promo. He can talk, but he’s not exactly compelling to listen to by himself. That’s why it was interesting to see Michael Cole out there with him when the segment began. Years ago, they’d have Vince McMahon or Jim Ross do in-ring interviews on Raw. I’d be game for Cole doing something similar every week, the same way they’ve started to put Byron Saxton out there for post-match comments from wrestlers.

Of course, Rollins ended up coming out and dismissing Cole. Not much to note here, except that I’m impressed with how Balor has been portrayed. He’s a big deal. As he should be.

Rusev def. Mark Henry to retain the United States Championship. Rusev badmouths Americans in the Olympics, which draws out Roman Reigns. Poor Rusev. He keeps getting on these big rolls, only to run into run into a golden boy that kills his momentum. Awhile back it was John Cena. Now it’s Roman Reigns. Mind you, they could have a screw job finish that allows Rusev to keep the title. But smart bet is Reigns leaves Summerslam with the belt.

They seem to be presenting the idea that Mark Henry is being put out to pasture. Supposedly Henry is looking to retire. So if they want to make a story out of it, that’s fantastic. He does well with high emotion. So it might make for some good TV. 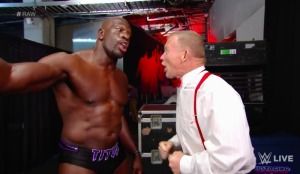 Darren Young def. Titus O’Neil. Titus wins with a handful of tights. The slogan goes: “Make Darren  Young Great Again.” This match was based on Titus asking Darren a question we’ve all been wondering: “When were you ever great?”

Not happy to see Titus hold the tights for a pin. But at least they acknowledged it. As recently as a few months ago, the announcers would have ignored that. I don’t see the upside of having Titus be a heel. He’s very likable. On the plus side, his little shouting match with Bob Backlund backstage was fun. If all this gets the Young/Backlund team over, maybe it’ll be worth it.

Nia Jax wins an enhancement match. So Nia Jax and Braun Strowman are basically doing the same thing. They need to be careful about not doing the exact same thing with these two. I understand the objective is the same, and I’m fine with squash matches. But let’s change up the presentation between the two. Give me different textures and tones.

Kofi Kingston & Big E. def. Luke Gallows & Karl Anderson. On the subject of different tones and textures, you can’t get much more different than these two. The New Day is joyful, and there’s nothing joyful about Gallows & Anderson. They’re natural opponents. 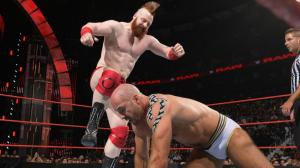 Cesaro def. Sheamus. I don’t know if that promo Cesaro cut on the network was a “worked shoot” or a legit shoot. Either way, it’s nice to see them tapping into what I assume are Cesaro’s real emotions. Even if they’re not, it taps into some of the fans’ frustrations at Cesaro not getting the push he deserves.

So what do you do with Sheamus at this point? He feels so flat, so cold…

Jinder Mahal def. Heath Slater to earn a Raw contract. WWE is bringing back some old names to flesh out the dual rosters and put new talent over. Shelton Benjamin and Rhyno are on Smackdown, and now we’ve got Jinder Mahal on Raw. But what’s confusing about that is Mahal doesn’t have a lot of name value. Outside of his work with 3MB, I have no memory of what Jinder Mahal in his WWE run. Something with the Great Khali maybe? Either way, I’m glad for him. Who knows? Maybe he’ll get a better shot this time around.

Seth Rollins def. Sami Zayn. I appreciated Rollins and Zayn building to the Pedigree. By my count, Rollins went for it three times before he finally got it on the fourth. And on the subject of finishers, why isn’t Zayn beating people with the Blue Thunder Bomb? It’s a great move. But he never wins with it.

Brock Lesnar & Paul Heyman return to Raw. Randy Orton makes a surprise appearance to hit an RKO on Lesnar. Well, that didn’t take long. Our first attack across brand lines. There’s an element of frustration seeing this, plus Heath Slater showing up on both shows. This doesn’t exactly set a good prescedent. Why even draft Orton and Lesnar to separate shows? 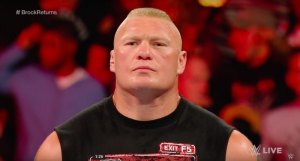 Still, that shot of Orton hitting the RKO on Brock was great. I didn’t even hear the crowd make any noise. They need to interact somehow. I suspect Lesnar and Heyman will invade  Smackdown as early as this week, with a contract signing to follow.

Rumor had it Heyman’s contract with WWE had expired, and he just signed a new deal this week. After this promo, we should all be very thankful for that. A Paul Heyman promo was the main event of Raw, and for good reason.

Dolph Ziggler wins a six-pack challenge to earn a WWE Title shot at Summerslam. As if Finn Balor earning a shot at the Universal Title wasn’t enough, Ziggler pulled this win out of nowhere. Dolph Ziggler and Dean Ambrose wrestling for the WWE Championship at a major pay per view. Sure, why not? They’ve got some rehabbing to do with Dolph. But it’s a feel good moment. Ziggler works so hard, and deserves to much better than to just be another guy on the roster. He’s not getting the belt. Not now at least. But this is a great chance for him to shine on a big stage.

Randy Orton def. The Miz. I hated this. Not because Orton won, but because Miz lost clean. They just had to put Orton out there with the Intercontinental Champion? There was nobody else on that roster he could have wrestled?