Dean Ambrose retains over Seth Rollins? Nice! Rollins has been emphasized heavily lately. So it’s cool that they evened the playing field a bit, and gave Rollins a win.

Aside from the title match, literally nothing mattered on this show except the WWE Draft picks. So let’s jump right into those, and see what the rosters look like… 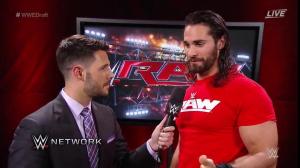 Let’s assume for now that the WWE, Women’s, and Tag Team Champions will travel to both shows. We haven’t been told otherwise, though I do believe it’s happening. That means Raw now has the United States Title and the future Cruiserweight Title, while the Intercontinental Title is on Smackdown.

John Cena being summoned to Smackdown was no surprise. If the idea is to make Smackdown relevant and to drive viewers up, having the face of the company on the show makes all the sense in the world. And as you want some built-in rivalries once the split takes effect, it’s easy to see why AJ Styles would got to Smackdown as well.

What’s surprising is Finn Balor going to Raw. Balor has a built-in history with AJ Styles from New Japan Pro Wrestling. One would think they’d want to capitalize on that, and put him on Smackdown. But The Solomonster made a great point on Twitter: At about 190 lbs, Balor could be WWE’s choice to head up the new Cruiserweight Division.

On the other hand, he has even more of a history with Luke Gallows and Karl Anderson, who will be on Raw with him. I’m disappointed we won’t get to see Styles and Balor clash in the near future. But at least there’s a chance for them to run with the history that exists between he and The Club.

Becky Lynch should be happy. She’s the lead female babyface on Smackdown. You can argue this is a consolation prize, considering she’s in a smaller pond, and Charlotte and Sasha were picked first. But not being put next to those two will give her a chance to develop even more. This woman is a star, and now she has the chance to shine brighter than ever.

Kane should not be happy, at least from a story perspective. A proven commodity dating all the way back to the Attitude Era, and he wasn’t even in the top 30? They even had him chokeslam Zayn and Owens in front of the authority figures. They could easily do some sort of program with this. An aging demon? Hm…

Many of us expected to see American Alpha drafted. Nia Jax is a different story. I haven’t seen much of her work, but her look immediately sets her apart from every other woman in the company. It’s unfair to compare the two at this juncture, but I hope she becomes what Awesome Kong never became in WWE.

2 thoughts on “WWE Draft Picks, and Other Ponderings From Smackdown”