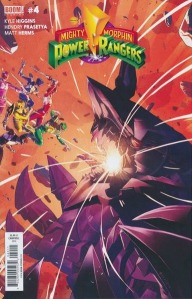 If you dare to think of the Power Rangers from a semi-realistic standpoint, you come to the conclusion that in some ways, they’d operate like a military operation. What you basically have here are soldiers fighting in an interplanetary war with space-age weapons and giant robots. So logic dictates that you’d have your leader, in the case the Red Ranger, dictate your battle plans while the other Rangers fall in line. Makes sense, right?

Of course, logic and realism weren’t the strong points of Mighty Morphin Power Rangers. (I think the my first clue was seeing that blue sky on the moon.) On the show, the Rangers didn’t really operate like that, at least not in the era this book takes place in. Jason was indeed the leader, but it seemed like more of an honorary title. He took on the role, but the Rangers were a team. We never heard lines like: “Jason gave you an order.” That’s not the case in Mighty Morphin Power Rangers #4, and it’s a turn-off.

The team’s trust in Tommy has been shaken, as he’s revealed he’s having visions of his former master Rita Repulsa. The Green Ranger is benched for the Rangers’ battle against Scorpina and the Dragonzord, which is once again under Rita’s control. But Tommy isn’t one to sit idly by when he knows he can help. The resulting argument will lead to disaster for the Rangers.

Early in the issue, Jason tells Tommy not to come into the field. As the battle progresses, he tells Zordon he wants to go in, as he’s seemingly rid himself of the visions and can help. Zordon advises him not to, as “Jason has given you an order.” That line by itself is weird. Especially because Zordon says it. He’s the boss, isn’t he?

But after the fight, which they win thanks to the Green Ranger’s help, Jason gets indignant. He actually says: “I don’t know how I could have been any more clear. You were not to come into the field.”

I don’t have a problem with what Jason is saying. It’s how he’s saying it. He almost comes off like a parent disciplining a child. Jason and Tommy, even when they were at each other’s throats, never talked to one another like that on the show. As such, Jason looks like a condescending jerk. I’m wondering if this is being done to establish Jason feeling threatened by Tommy. One might gather that from things he’s said in previous issues. I’m trying to give Higgins the benefit of the doubt on this one. Either way, I don’t like this side of Jason.

As we’ve seen in previous issues, Higgins, Prasetya, and the team show us things we never could have see on the show. In the zord fight, we see Green Ranger crash through the eye of the Dragonzord, which is spectacular. We also learn that the Triceratops zord has an underwater mode. We also see Scorpina in the Command Center. The Rangers restrain her by tying her to a chair, which is downright comical. We’ve seen characters trapped in force fields numerous times on the show, but for some reason Scorpina gets tied down like a damsel in distress.

Hendry Prasetya’s performances have been consistent in the five issues he’s done. His take on the Power Rangers and their world hasn’t gotten old. Even simple things, like a shot of Dragonzord walking away from camera and rising out of the sea, manage to be extremely cool. Ditto for a handful of panels where we see the words powering up. My favorite panel in the issue is pretty basic shot of the Blue Ranger in the cockpit of the Triceratops Dinozord (shown right.) We’d never seen it from that angle before, and it’s panels like this that make this book so fun for longtime fans like yours truly.

We have yet another edition of our back-up feature, “The Ongoing Adventures of Bulk & Skull.” I hate to say it, but I’m officially turned off by this. Not because the writing or the art are bad, but because we’ve been on this story since issue #1. Bulk & Skull manage to capture a putty, and use it to try and make themselves look like superheroes. They could have done this in one, maybe two installments. This issue gives us our fourth. If they’re going to keep doing this we need a new story, and we need to quicken the pace.

This Jason thing is the biggest hiccup the series has seen so far, but by no means is it a reason to drop the book. Higgins, Prasetya, and the team have got something special, and it’s been consistently good. PR fans have been given a great gift with this series. And by and large, it keeps on giving.