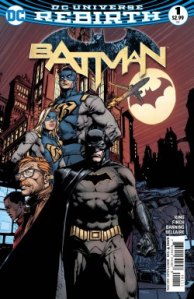 Let’s not kid ourselves. Tom King, David Finch, and this crew have their work cut out for them with Batman. In so many ways, this DC’s flagship book. It’s certainly one of their biggest cash cows. Top that off with the fact that we’re coming out of the Scott Snyder & Greg Capullo era, and there’s a lot to live up to.

But, you know, no pressure…

The new Batman era kicks off with a hijacked missile and a commercial airplane flying over Gotham City. When the two meet, countless lives are at stake and our hero is put to work. As always, Batman is ready to lay his life down for “his” city. But when two new heroes emerge, the game may change dramatically. Gotham may not be Batman’s city anymore.

I can’t say I was overjoyed to hear David Finch was returning to a Bat-book. He’s definitely got his critics and nitpickers. Having been one of them, I would know. But Finch is at home in the dark, grim, and shadowy corners of comic books. This is the case because so much of what we get from him is dark, grim, and shadowy. Even if the story or the characters don’t call for that at all (Justice League of America, Wonder Woman, etc), that’s what we get from him. That’s why it puzzles me when Finch gets assigned to the more colorful heroes, and not something like Hellblazer or Swamp Thing. But if you must put him with one of the big guns, Batman is the best choice for obvious reasons.

Our art team also compliments Finch better than previous ones did. Inker Matt Banning and colorist Jordan Bellaire aren’t as quick to plunge things into sheer blackness. There’s a much better balance between dark and light. The city lights pop in contrast to the often dark and dreary sky. But the color palette for Batman himself is also dim enough that you believe it. As for Finch’s pencils, he may win or lose me depending on how he draws this new heroine. I’ve previously said Finch only knows how to draw one woman. All his women have the same face. The same skinny waist. The same big boobs. If he can find a way to draw her (and any other lady that pops up in this series) so she looks like someone other than Superhero Barbie, I’ll be impressed.

This looks like it’s going to be about super-powered heroes trying to take Batman’s spot as guardian of Gotham. Midway through the issue, he even dismisses potential involvement from Superman or Hal Jordan. He caps it off with the line: “This is my city. I’ll save it.” This is an interesting route for Tom King to take, seemingly casting Batman as the underdog when so many readers already believe Batman can kick Superman’s ass. But a super-powered duo operating in Gotham could play into the idea of the city as its own unique character. How does Gotham react to its new saviors? And how does this transform the city’s criminal element?

There’s also a line (or at least part of a line) late in the book that’s really nice, albeit subtle. As Batman seemingly staring death in the eye, he tells Alfred: “I prepared messages for the boys in case I…” The boys. I like that. Like a father referring to his sons.

The buzz around this story has a lot to with what Gotham City deserves. What kind of hero does it deserve, is Batman the hero it deserves, etc. At this point, I’m just hoping King and Finch can give The Dark Knight the kind of series he deserves. I’m not sure we’ve got that yet. But King has earned his shot. So let’s let him take it.

One thought on “A Batman #1 Review – Batman Begins Again”