A young lady asked me this at work the other day without a hint of snark. She’s an outdoorsy girl without much use for movies. But still, it’s easy to just assume everybody knows what Star Wars is. You’d think people would inevitably see the original simply by virtue of being alive.

But I think that’s a geek bias seeping through. After I got this question I put the above meme (Get it?) on my Facebook. One of the comments I got read: “I’ve never seen a Star Wars movie. Thought about getting the DVD and starting from the beginning, but I’m not sure where it starts.”

I don’t push Star Wars, or anything else I love, on other people. But if people are curious about this kind of thing, I’m happy to offer my opinions. And this idea of explaining what Star Wars is about intrigues me. How do you offer a simple explanation of something that’s come to encompass so much? 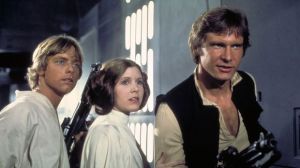 For whatever reason, when I got this question I thought of Kyle Gnepper over at Unshaven Comics. I’ve seen Kyle and the Unshaven crew a bunch of times at Chicago area comic conventions over the years. When he’s hyping a new comic series, he’s always got a one-sentence pitch to hook you in. Something to catch your interest and intrigue you. I won’t try to directly quote him for fear of butchering his words. But for instance, he might hype Unshaven’s The Samurnauts by saying: “It’s about a group of samurai astronauts led by an immortal Kung Fu warrior monkey.”

At that point you’ve got to at least look, right?

So what would a similar pitch be for Star Wars? And by Star Wars, I mean the original 1977 film. The young lady I spoke to was shocked to hear there were seven movies in all, with more on the way. But Episode IV: A New Hope is how the world at large was introduced to this strange universe, and it obviously served as the basis for everything else. That’s where newbs should start.

I figure simplicity and conciseness is important when you begin to explain something like this. Don’t start by trying to explain who Darth Vader is, or what a Jedi is, or how the Skywalkers are all related to each other. You’ll lose them if you try to explain all that stuff.

Here’s the “Gnepperfied” Star Wars synopsis that I came up with: “It’s about a galactic dictatorship with a weapon that can destroy a planet, and the rebel heroes fighting against them.”

Some might argue it’s too simple or generic. But that’s the point, isn’t it? You lure them in with the broad strokes, and then explore the intricacies as you get closer. Once you’re past the simple explanations, you can get into how the Empire works, who the iconic characters are, etc.

On the subject of those iconic characters, I’ve recently started wearing character socks to work. Star Wars, superheroes, etc. Because, you know, that’s what cool people do. One such pair features little images of C-3PO. This girl in question sees the socks, her eyes pop and she asks: “Are those Minions on your socks?”

We can only do so much.

Image 2 from usatoday.com. Image 3 from digitalspy.com.