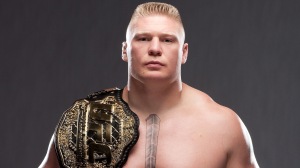 Here’s a development that probably shouldn’t have been a surprise, but was anyway. Brock Lesnar is returning to the octagon.

WWE’s “Beast Incarnate” will fight Mark Hunt July 9 at UFC 200. Lesnar has reportedly been granted a one-off by WWE. Just over a month later, Lesnar will compete at Summerslam.

So UFC gets one of their biggest attractions back for a night, and will presumably make a ton of money on pay per view buys. On the other hand, WWE gets a big chunk of change for Lesnar, has its name out there in a major mainstream sports story, and gets a lot of added press for Summerslam. It’s that last one that really intrigues me. How many UFC fans will follow Brock back to WWE after July? If WWE puts Brock with a strong opponent, how much does Summerslam stand to benefit?

Call me a cynic, but I’ve never been a big believer in pro wrestling’s ability to appeal to MMA fans. At least not in this era, when interest in wrestling is fairly low. It just seems like most MMA fans don’t see wrestling as a viable alternative. Especially if you expose them to all the stupid comedy we’re so often subjected to. But if Brock has proven anything, it’s his uniqueness. If he fares well against Mark Hunt, WWE may have the chance to ride that wave of momentum and get some fresh eyes on the product.

But what happens if he loses? How does that effect the average joe’s perception of WWE, and the so-called legitimacy of its athletes?

Either way, the buzz surrounding this fight is exactly what both parties are looking for. Personally, I can’t wait for the Paul Heyman promos. Perhaps this paves the way for more one-offs between UFC and WWE. We know Ronda Rousey is a big WWE fan, after all…

The show opens with the Money in the Bank Ladder Match participants all on ladders in the ring. Teddy Long makes a bizarre appearance. This came off pretty scripted. But the ad-libbing was pretty cool. Loved the crowd chanting “stupid idiot.”

So they trotted Teddy Long out there to hype Smackdown going live…even though Teddy hasn’t been on Smackdown in years. But whatever. At least the crowd was happy to see him. But I reached for the remote as soon as Stephanie came out there to talk to him. Between Teddy botching his lines (bless his heart), and my ill will left over from Steph’s promo on Charlotte last week, it was time to tag out. 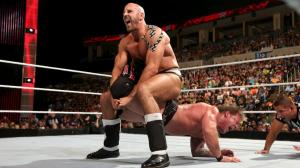 Cesaro def. Chris Jericho. Great win for Cesaro. The big swing into the Sharpshooter was tremendous. I don’t expect Cesaro to win the ladder match. But a victory over Chris Jericho is a nice consolation prize.

WWE airs a video package on Seth Rollins’ quest to be the best, and his rivalry with Roman Reigns. Firstly, I’m very happy they’re starting to do more of these video packages. These are usually pretty damn good.

This one was going fine until they got to Seth’s injury last November. They turned his story from that of an underhanded and selfish villain into a feel-good comeback story. Rollins had the title taken from him, he suffered a terrible injury, and he missed Wrestlemania. And as I understand it, that’s not what they’re trying to do with Rollins. They want him to be a heel, don’t they? They’re sending us mixed messages.

Rusev def. Jack Swagger via count-out. Zipped right through this one on the DVR. Jack Swagger has been cast as a loser. So why should I care about any match he’s in? It’s pretty much a foregone conclusion that he loses, even if it’s only by count-out.

John Cena and The Club meet again. Did he say “the pull-it club?”

I was disappointed to see them go with the standard “Cena can’t wrestle” approach with AJ. But he upped the intrigue by using the B-word. “Guys like you bury guys like me.” We in the die-hard audience know what that means. But the casual fans don’t. It would have been nice to hear him elaborate on that point. What exactly does he mean by bury? Is he implying Cena is using politics to hold back the better wrestlers? If so, he needs to say that.

After this segment, Styles has to win at Money in the Bank. It rang true when he talked about Styles losing to Reigns and being desperate. I understand Styles is a villain now, and things like that can be said without necessarily hurting him. But he needs a big win to get some of his credibility back.

The Vaudevillians def. Enzo & Cass via disqualification. This is the match they should have been building up since Enzo got hurt. The Vaudevillians hurt his partner, so Cass wants revenge. It’s nice and simple. But Cass really should have cranked up the intensity when he was beating up Gotch and English. He’s supposed to be enraged right? So act enraged, dude!

Alberto Del Rio def. Sami Zayn. Del Rio desperately needs a repackaging. In the ring he’s great, but from a character standpoint he’s a boring caricature. He can be a player again if they just put some energy into freshening him up.

Dean Ambrose def. Kevin Owens. I appreciated the announcers playing up how close Dean Ambrose has been to the WWE Championship before. It’s happened multiple times in the last year. We saw multiple clips of him in The Shield on this show, and if they want his star to keep growing, they need to work to establish that he’s in the same league as Rollins and Reigns. A Money in the Bank contract certainly wouldn’t hurt in that regard.

Natalya and Becky Lynch confronted Charlotte and Dana Brooke. Yeah, I zipped through this one too. I normally don’t DVR through so much of the show. But I’d had enough obviously scripted dialogue for one night. And I was damn scared of Stephanie coming back out there and eviscerating Charlotte again. The end result was Charlotte and Dana beating down the babyfaces. It looks like we might get a tag match out of this at Money in the Bank. Fair enough.

Fatal Fourrway Tag Team Title Match announced for Money in the Bank. This strikes me as a way to get the titles off of The New Day and onto Karl Anderson & Luke Gallows without having them pin The New Day. If that’s the plan, then do you put them with The New Day at Summerslam, or do you go with Cass & Enzo? 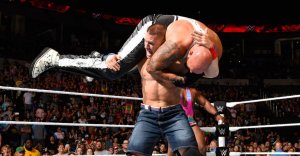 The Club def. Kofi Kingston & Big E. in a three-on-one handicap match after Xavier Woods gets taken out. Cena comes out to stop a post-match beat-down. Poor Xavier Woods. He’s always the low man on the totem pole for some reason.

This was another instance of WWE saving Cena for the rescue spot, and making him look like a douche in the process. The New Day saved him earlier in the show. When Xavier went down, why wouldn’t he come down and take his spot in the match? Is it because they want to save Cena’s in-ring return for Money in the Bank? If so, that’s fine. But then why write the segment this way? Why not have Woods go down during the match, so The Club can get the win and Cena doesn’t look an asshole by waiting all that time?