It makes sense that Kimberly is the first Power Ranger to get a solo story from BOOM! Studios. That character had a special connection with the audience. She was spunky, athletic, strong, and feminine. On a show that was primarily for boys, she gave young girls someone to look up to. In many ways, she was the most interesting character on the show. So it’s all the more natural that Brenden Fletcher, renowned author of books like Batgirl, Gotham Academy, and Black Canary, would find his way to her. He obviously knows his way around strong female characters, which bodes well for Kimberly’s fans.

Some time after Kimberly left her Power Ranger days behind her to compete at the Pan Global Games, she finds herself in St. Moineau, France. Her mother and stepfather, along with all the town’s residents, have mysteriously gone missing. Suspecting foul play, she contacts Zordon. While she may be a bit rusty, Kim is about to dust off her helmet and bow for another round as the Pink Ranger!

In contrast to the ongoing series, Pink arguably appeals to an older audience that’s more familiar with the TV show. This issue is full of fan service. We get very specific callbacks to names and events from the show, not the least of which are the Pan Global Games, and a magic sword Zordon uses to give Kim her powers back. It would have been very easy to simply separate the Pink Ranger from the rest of the team, somehow. For instance, perhaps the other Rangers get sent to another planet, and she’s left to defend Earth herself. The fact they didn’t do that says a lot about this team’s respect for the character and her world. While those less familiar with the show may be left in the dark a bit, it’s worth it for those of us who watched all those years ago.

The Kimberly we meet here has a bad ass streak that the one we knew did not have. She wears a leather jacket, rides a motorcycle, and has a bow and arrows if needed. It’s a bit like Arrow meets The Hunger Games. But Fletcher and Thompson make sure there’s enough of the bubbly Kimberly that we remember. You can believably hear Amy Jo Johnson’s voice in her dialogue. 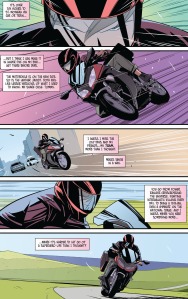 Our villain winds up being someone we know from the show, who has long deserved a crack at being a solo villain. Seeing how he and Kimberly match up one-on-one should prove intriguing for (again) long time fans of the show.

Danielle Di Nicuolo draws a hell of a Pink Ranger. Though the costume she wears in this issue (shown above) is slightly different than the one we’re familiar with. Most conspicuous are the traces of black, which I interpret as a mark of Kim’s experience and veteran standing. I imagine if there were to be a Power Rangers version of Marvel’s X-Factor, reuniting the original team members, these are the kind of costumes they’d wear.

Di Nicuolo’s strengths lie with action scenes. Her Kimberly is best when she’s kicking, flipping, or using her bow and arrow. She show’s us a fighting style that makes sense for Kimberly. Her inclusion of a classic Pink Ranger pose toward the end of the issue was much appreciated.

I never imagined we’d have two Power Ranger comics on the stands at the same time. Much less two that seem to value and appreciate the source material so much. It’s a testament to how much of an impact Power Rangers had on ’90s kids, that they’d grow up and create such awesome comics featuring those heroes. I, for one, can’t wait to see more.