What has really stood out about Maid Waid and Chris Samnee’s work on Black Widow thus far is how little they’ve needed to use dialogue. The other day I had praise for The Punisher #1 for this same trait. But Waid, Samnee, and their crew have made it a continuing trend. Thus far, it has effectively set this series apart.

Natasha Romanoff is being blackmailed by a man calling himself “Weeping Lion,” who is in possession of her “darkest secret.” Needless to say, she doesn’t want it getting into the public eye. Thus, Natasha has been doing his bidding, including stealing from a S.H.I.E.L.D. helicarrier, which we saw in issue #1. In this issue Black Widow returns to what remains of the Red Room, the Russian facility in which she was trained as an assassin. But S.H.I.E.L.D. is by no means done with Natasha, and she must continue to stay one step ahead of them. 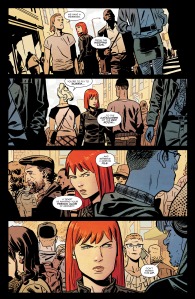 Chris Samnee excels at conveying Natasha’s intensity strictly through his art. As present-day Natasha doesn’t say much in this issue, that’s pretty much a necessity. When she does something as simple as shifting her gaze in a different direction with a slight furrow of her brow, it’s a moment to note. She’s not big, loud, or talkative. But she’s still an Avenger, and a lethal weapon. So when she’s in a potential combat situation, there’s weight and importance to virtually every move she makes. That’s a hell of a dynamic for a main character to have.

Last issue we met Agent Elder, whose protege was killed during the events of issue #1. He’s got a damn good reason to be angry with Black Widow, though it doesn’t seem like he’s much of a threat to her. In the opening sequence she foils his pursuit of her with a simple trip wire. Perhaps that’ll make it all the more interesting down the road if he somehow ends up catching her.

Much of this issue consists of flashbacks to Natasha’s childhood as she walks through her former home. We see how it has deteriorated over time, and what few relics of the past remain. We get a sense of how Natasha was taught. There were strict rules, obviously. But there were also instances of care and compassion when necessary. Samnee, and colorist Matthew Wilson tint these scenes under a pinkish hue, which creates an interesting vibe. I would suggest it’s almost one of innocence. Obviously red implies a certain intensity, and of course Widow’s hair is red. And it is the Red Room after all. The implication seems to be that things are violent, but not nearly as violent as they will be.

Thus far, Black Widow has been a visually commanding and intriguing series that might just give us new insight into one of Marvel’s longest-running female heroes. At the very least, we’ll get to see her kick a lot of ass. It’s tough to complain about that.