Chances are that once Payback is over, many of our questions regarding the WWE equivalent of the Bullet Club will have been answered.

Ever since word hit that WWE was in talks with AJ Styles, Karl Anderson and Luke Gallows, speculation ran rampant about a Bullet Club invasion (though perhaps not with that name). Now that all three are on WWE TV, it looks like the time is near. Except the smart bet is that Anderson and Gallows will turn out to be against Styles.

So the question is, who do you put in that third spot? A heel Roman Reigns? The recently de-throned NXT Champion and former Bullet Club member Finn Balor? Or does there even need to be a third member? Could Anderson and Gallows stand on there own?

So many questions. And as I’ve said before, lingering questions are a good thing…

The only reason I can think of to put t these two together again would be to have Ryback win the title. Unless they’re punishing him for what he said in the media about not being happy with his spot on the Wrestlemania card. But if that’s the case then why put Ryback in a title match at all? I maintain Kalisto could do great things with the United States Title. But we haven’t seen much of him on Raw recently. His most recent appearance consisted of him being kayfabe injured in a match with The Dudley Boyz. He’s not a lost cause, but signs seem to indicate Kalisto’s time with the title is done with. Kind of a shame, but not a big loss in the grand scheme of things.

This one is pretty obvious. Ziggler loses to Corbin, in the process giving him a match that’s decent at the very least. I’ve said this from the start: Corbin is in great hands with Dolph. It’ll be interesting to see how he does when he works with wrestlers who don’t bump and sell like their lives depend on it. But for now, Corbin is in a good spot.

Enzo & Cass didn’t barely scratched the surface of what they could have done with The Dudley Boyz. That’s why I see Bubba and D-Von running in on this one to cost them the match. That’ll give us more matches between those two teams, and at least one outing between The Vaudevillians and The New Day for the tag belts. Granted, they could have Cass & Enzo win, and then do the angle with the Dudleys during a title match. But given how over both those teams are as babyfaces, that seems like the kind of match you’d save for Summerslam. Plus, a win for The Vaudevillians gives them a chance to shine. If they lose, they’re left with nothing to do. Their cartoony villain personas will mesh well with The New Day. 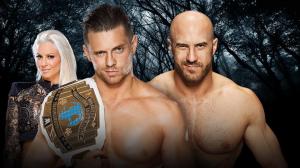 I see Miz weaseling his way out of this one somehow, likely with Maryse’s help. Having his wife with him has largely reinvigorated Miz’s career. If they give these two a nice long run, at least until Summerslam, they really have the chance to create something memorable. Of course, that means Cesaro has to lose this match. But if he loses the right way, it doesn’t have to be a setback. In any event, Cesaro doesn’t need the Intercontinental Title to get to the next level. If he keeps doing his thing and stealing the show on Raw, they won’t be able to ignore him.

Dean Ambrose could really use a big win. This guy was so close to winning the Royal Rumble, but came up short. Then he got pinned in the triple threat match at Fastlane. Then Triple H beat him in a title match at Roadblock. Then Brock pinned him in an underwhelming street fight at Wrestlemania. Can somebody throw this guy a bone? And by somebody, I mean Chris Jericho. Have Ambrose get the win, and then they can do a crazy gimmick match at Extreme Rules next month. Hopefully they can make that match mean a little more than this one does. I’m sure these two will have a good match, but this story could stand to have a little more meat to it.

The cool thing about this program is that the rivalry between these two is so personal, we can learn more about the Sami Zayn and Kevin Owens characters by how they interact with each other. Or at least, the potential is there for something like that.

I’m hoping they let these two feud for awhile. Not just because these two have such a personal history, but because Zayn is such a great traditional babyface (which is rare these days), and Owens is such a good heel. Obviously, there’s potential for great television there. As for this match, I say we give Zayn the first win. That way, Owens has extra impetus to cheat to win the rematch, most likely at Extreme Rules. This one could be the dark horse to steal the show.

Much like Sami Zayn, Natalya is a great traditional babyface. She’s naturally very likable. This new era in the WWE women’ division is right up her alley. Anyone in the Hart family is bound to thrive when wrestling and match quality are emphasized.

Unfortunately, this isn’t her time. There’s no reason to take the title off Charlotte now. And while some feel otherwise, I think she and her dad make a nice combo. While he could have easily stolen her thunder, Flair is adding to her presentation rather than taking away. I’m not sure who you put her with after Nattie (Paige? Becky Lynch again?), but I get the feeling Charlotte will hold on to that title until she runs into Sasha Banks again.

Well, here we are. Yet another opportunity for WWE to turn Roman Reigns heel. Will it happen? Probably not. But he’s in there with AJ Styles. In Chicago, of all places. WWE knows full well Reigns is walking in there to a chorus of boos. Hell, he walks into every arena to a chorus of boos. If they were going to turn him, now is as good a time as any.

Whatever happens with Anderson and Gallows, there’s no way Reigns drops the title here. Styles is hot right now, but he’s not that hot. The story also lends itself to AJ’s former friends turning on him. As WWE has spent the better part of a year stubbornly digging their feet in as far as Reigns being a babyface, I say if there is a third man to help cost Styles this match, it’s Finn Balor. WWE even ran a video on their web site about Balor possibly showing up on the main roster. He’s been ready for awhile now, and a program with AJ Styles will give him a hell of a start on the national stage.