Marvel’s bromantic buddy comedy continues with a classic comedy set up: The double date. This makes for an issue that’s less about drama, and more about the wacky, comic book style comedy. But Joe Kelly, Ed McGuinness, and the team make it work. This issue comes off like a story that was destined to be told, unlikely though it may be.

Still trying to see the good in Deadpool, Spider-Man accepts his invitation to hang out at a club in New York City. Little does Spidey know that Deadpool has been contracted to kill his alter ego, Peter Parker. Likewise, Deadpool has no idea Parker and Spider-Man are one and the same. Peter is also unaware Deadpool has made the night into a double date. But the night takes a turn when Spidey learns his date is none other than Thor!

Spider-Man/Deadpool has a really nice, and to an extent unconventional, emotional core. It’s obviously meant to be a comedic story. But it’s also about Wade Wilson wanting acceptance and friendship. He’s trying to impress Spider-Man. Who can’t relate to that? And in turn, Spidey is trying to extend the olive branch, and trust Wade. The reader is rooting for Deadpool, and wants this “bromance” to be successful. No matter what bells and whistles they put on this book, that’s the key to this story’s success. 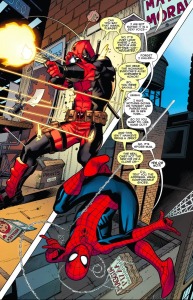 I won’t spoil how the date turns out. But Kelly writes it in a way that all the characters shine, and it’s genuinely funny. I never knew Spidey and Deadpool were such good dancers…

Ed McGuinness’ style really lends itself to the dynamic, comic book superhero pose, as we see on the opening splash page (shown left). McGuinness is also good at drawing cartoony expressions that we can still read in spite of Deadpool’s mask. Spidey doesn’t get that same treatment, which obviously makes Wade’s look unique. Also, the colors on this book really pop. Kudos to Jason Keith for that.

Considering what the majority of this issue consists of, the ending comes as a hell of a surprise. I won’t spoil it, but obviously things aren’t what they seem. I credit them for upping the intrigue in an issue that was mostly devoted to the comedic side of things. Spider-Man/Deadpool is a tribute to how diverse the superhero genre can be. It doesn’t have to strictly be about good guys punching bad guys. Kelly, McGuinness, and the crew have given us a tremendous take on the buddy comedy that makes the best of what both Deadpool and Spider-Man have to offer.

And the most explosive stuff is likely yet to come. Secrets have a tendency of getting out. What happens when Deadpool and Spidey learn the truth?