Several months after his last time-travel adventure with Doc Brown (it’s unclear whether the Telltale game is in canon), Marty McFly finds ordinary life to be rather boring. Even his girlfriend Jennifer, who travelled to the future with him, is losing her patience. But once again, a note from the past changes everything. Only this time, it’s not from Doc. It’s from his wife Clara. Once again, Marty’s old friend is in trouble. But how does can he come to the rescue without a time machine?

Back to the Future #6 opens up some interesting doors. But for the first time since the series began, I have some nitpicks…

First, a question. This goes beyond the comic book, obviously, but why is Doc time traveling again? In the second and third movies he repeatedly talks about destroying the DeLorean, wishing he’d never invented the time machine, the dangers of time travel, etc. He invents the train we see at the end of the Back to the Future, Part III so he can get his dog from 1985, and let Marty know he’s okay. But when we see him pop up at the end of the third movie, he’s already gotten the train modified with flying equipment. So at some point, Doc decides he’s going to start time traveling again. So why? This would be a good question for the series to address, at least briefly. (In any event, the obvious answer is: He’s time traveling again so we can tell more stories!)

Marty comes off a little too whiney in this issue for my taste. It’s like he’s a boxer begrudgingly coming to grips with having to hang up his gloves. At one point he actually asks Biff: “You ever feel like all the best stuff already happened? Like your best days are behind you?” Jeez, kid. You’re 17 years old. Quite your whining. You’ll live again…

Late in the issue, we find out Doc Brown had…wait for it…more than one laboratory! And it just happens to have another DeLorean in it (minus the Flux Capacitor)! Far fetched? Maybe. But maybe not. From previous issues, we know Doc has worked for the government, and has reason to keep secrets. And it looks like this other lab is essentially a glorified storage space. Marty and Jennifer even say there’s nothing of use to them there. 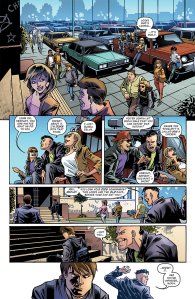 On the subject of Jennifer, my only major critique with this issue’s art has to do with, of all things, her hair. Early in the issue, it appears to be a light brown. As we get further into the issue, she becomes a blonde. What’s the deal?

That being said, Marcelo Ferreira’s animated style definitely fits this world. Dependent Marty isn’t much fun to look at. But loud, exclaiming Marty definitely feels like what Michael J. Fox did on screen. Once we get into the more dynamic stuff I think this series will be a lot of fun visually.

IDW set the bar pretty high for movie-continuity stories with Ghostbusters. Back to the Future has a chance to capture some of that same magic. It doesn’t have it quite yet. But if this series is half as good as its Ghostbusters equivalent, it’ll be better than a Back to the Future, Part IV movie could ever have been. Those are big words, but give it time…