It seems as if the Marvel Cinematic Universe will ultimately reach a point at which it incorporates just about all of Hollywood. This thing – the MCU, that is – just keeps expanding, through films, television, and even Netflix. At some point there are hardly going to be any actors left who haven’t at least dipped a toe into the industry’s biggest superhero world.

But really, that’s half the fun. We love to see our favorite actors from TV, movies, or types of entertainment dabble in superheroism. For instance, the casting of Parks and Recreation darling Chris Pratt in Guardians Of The Galaxy delighted droves of TV comedy lovers, and this summer’s introduction of Benedict Cumberbatch as the lead in Doctor Strange is sure to rope in some loyal Sherlock devotees.

There are countless similar examples, and the most exciting ones depend entirely on what you’re interested in. For me, in Marvel or elsewhere, the most enjoyable entertainment crossovers are usually when pro wrestlers or fighters find themselves in popular films. It’s always fun to get a look at their acting chops outside the ring and see how their imposing frames are used in action sequences. Rest assured, it’s happened in Marvel films.

In fact, there are three extremely noteworthy examples. 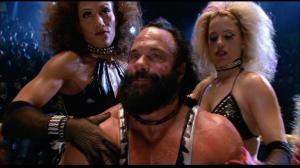 I have to start with what might still be the best appearance ever by a pro wrestler on the big screen. It’s been almost 15 years since Sam Raimi’s Spider-Man, but anyone who loved it ought to remember “Macho Man” Randy Savage’s role. Early in the film, as he’s just discovering his powers, Peter Parker enters an underground cage fight to earn some cash, get a car and impress Mary Jane Watson. His opponent: Bone Saw McGraw.

The sheer lunacy with which Randy Savage played this character was delightful to behold. He took his ordinary persona in the pro wrestling world and amplified it significantly to fit the comic book movie atmosphere. As a result, ost Spider-Man and WWE fans alike will never forget the role. Incidentally, the character even made a sneaky appearance in the beloved Spider-Man title that was once part of Activision‘s gaming lineup. He could be unlocked for a sort of special boss fight, though unfortunately Savage didn’t do any voice acting. 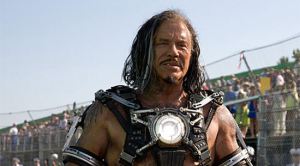 I’m bending the rules with Rourke, but only slightly. Many will recall that this bizarre, muscled actor did have a brief boxing career during a hiatus from Hollywood. Additionally, part of his big comeback to film was the 2008 film The Wrestler – arguably the best movie ever made about pro wrestling. He also appeared at Wrestlemania XXV and punched out Chris Jericho. So he’s a sort of honorary member of the pro wrestling community. And his turn as the villain Whiplash in Iron Man 2 was perfectly worthy of the absurd theatricality of WWE stars.

Sadly, the character has since been largely forgotten, thanks in large part to Iron Man 2‘s consistent ranking near the bottom of the Marvel movies. Still, give this one deserves another look and you’ll appreciate the larger-than-life, ultra-ripped, stringy-haired portrayal as something pretty WWE-esque. There’s even an Iron Man 2-themed game at Gala’s jackpots page that shows Rourke’s character in the background, looking like the ghostly image of a pro wrestler. The game is one of many that fusees Marvel characters with casino gameplay, but uses very real images from the film – and Rourke calls to mind images of wrestlers like Edge or even Savage turning slowly to finish off opponents. 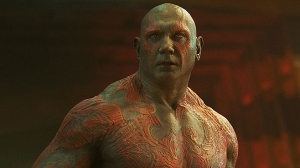 Batista in Guardians Of The Galaxy

Dave Bautista, aka Batista, has actually gotten pretty busy with his film career. Let’s not call him the next Dwayne Johnson just yet, but he may be in the early stages of a more complete wrestling-to-film transition. Just last year he had an amusing role in the James Bond film Spectre, and according to his IMDB page he may be playing The Kurgan in a remake of Highlander.

But Batista’s most enjoyable and probably most famous film role to this point was his turn as Drax in the aforementioned Guardians Of The Galaxy. Essentially a well-meaning alien thug who’s light on words and heavy on muscle, Drax fit in perfectly with the movie’s cast of misfit talents who stumble into become superheroes. A sequel’s already been announced, and it looks like Batista has a firm hold on a budding franchise.

Image 1 from cbn.com. Image 2 from wrestlersinhollywood.tumblr.com. Image 3 from blastr.com. Image 4 from crave online.com.