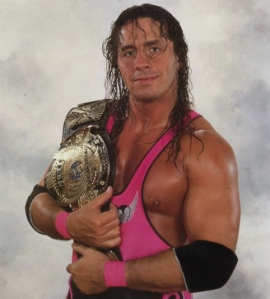 Before we get to Raw, let’s touch on a couple of stories. The first one just broke yesterday, and it’s a bit of unfortunate news regarding an all-time great…

Bret Hart announces he’s battling prostate cancer. Bret himself made this announcement on his Facebook. He seems optimistic about it, which is good news. Bret is a hero to many, and he’s in the hearts of a great many this week. Good luck, Bret. We’ll be thinking of you.

Vince McMahon allegedly angered by The Rock going off-script on last week’s Raw. I, like a lot of fans, really enjoyed that moment last week when The Rock went “off the script” and talked to those cosplayers at ringside. They were having fun, and the crowd was having fun, so The Rock decided to have fun. But low and behold, Vince allegedly didn’t like it.

Considering how WWE has been booked over the last few years, that sounds about right.

I loved The Rock’s response to said heat on Twitter: “…at @WWE events, going “off script” is what I live for. So much fun for the fans. Nightmare for Vince.” 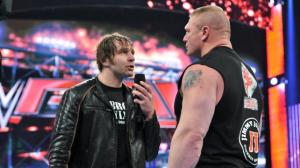 Dean Ambrose confronts Brock Lesnar at the top of the show, Lesnar attacks Ambrose to close the show. Well how about this? For once, it wasn’t all about Roman Reigns. They let Ambrose have the headline story this week.

I’d love to think WWE might surprise us at Fastlane, and give Ambrose the main event with Triple H. It’d damn sure be something different. The fans are into Ambrose, and the suspense when he and Hunter were the last ones in the Rumble Match was amazing. And it could create some interesting tension between Ambrose and Reigns! It won’t happen, of course. WWE has been bound and determined to make Reigns their guy for over a year, and they’re not about to stop now. But it’s fun to think about.

Still, it’s clear WWE has faith in Dean Ambrose. They trusted him to hold his own in there with Lesnar, and he did just that. Ambrose can be such a huge star for WWE. I just hope they realize what they have with him. 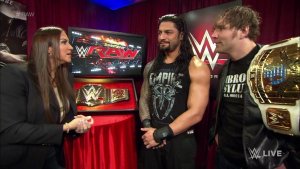 Michael Cole hypes Stephanie McMahon’s appearance on Good Morning America, as part of a series on women making a difference and serving as positive role models. That bit of copy Michael Cole read during Dolph Ziggler’s entrance is a perfect example of the disconnect that exists between WWE and its fans, and it’s one of the many reasons why fans just don’t get into WWE like they used to.

Every week on television, Stephanie McMahon plays a tyrannical heel authority figure. But because WWE is so image conscious, they make a point of hyping up her humanitarianism, her involvement with charities, etc. There’s nothing wrong with her doing any of that, but when they go out of their way to mention that on TV, they contradict the stories they’re trying to tell. They’re breaking the illusion they’ve created in their fictional universe. Yes, we know Stephanie isn’t really an evil person. But can you let us suspend our disbelief when we watch your damn show? 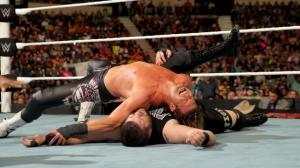 Dolph Ziggler def. Kevin Owens. Really good match. I loved the way Ziggler attacked that turnbuckle when Owens Irish-whipped him into the corner. Shades of Bret Hart, there.  The fact that Ziggler isn’t consistently main eventing Raw is a crime, and yet another indictment of just how screwed up creative is right now.

“Even Steven Booking” strikes again on this one. Owens beat Ziggler last week, Ziggler beats Owens this week. The sad thing is that Owens is one of the few good heels WWE has right now. If WWE wanted to build him up as a potential Undertaker opponent for Wrestlemania, they could easily have a really good program. I originally thought Owens and Sami Zayn were going to wrestle on that show, but that doesn’t seem to be the case. Alas, Owens is left spinning his wheels for no good reason. 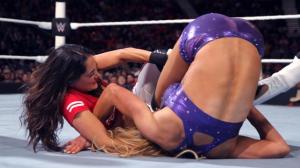 What the hell happened here? We were doing so well. Charlotte was in a compelling storyline with Becky Lynch that allowed both of them to shine. Then at the Royal Rumble we introduced Sasha Banks into the title picture. And now…Charlotte gets beaten by Brie? (Her right shoulder may not have even been down, as you can see on the right.)  Seriously, what the hell? I suspect this is will lead to a title match at Fastlane, which I suppose I can tolerate as long as Sasha gets the Wrestlemania match. But what a disappointing direction to take things in.

Naomi & Tamina turn on Sasha Banks during her match with Becky Lynch. I love how they slipped that little Kanye/Wiz Khalifa reference into the talking segment. “We’re hip! Really, we are!”

Happy to see Sasha is officially separated from Naomi and Tamina. She’s destined to be a star on her own. And if/when she becomes champion this year, they can easily come back to one or both of those two for a title defense. Neither of them would have given Ric Flair or Shawn Michaels a run for their money, but they’re both decent hands in their own right. 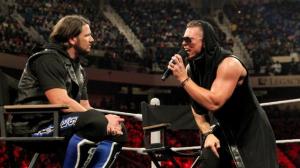 AJ Styles appears on Miz TV. Not at all what I was hoping to see Styles do on Raw this week, but at least they’re investing time in him. Granted, the fact that Miz talked for 90 percent of the segment doesn’t say much for their faith in his mic skills. But there are worse guys for him to spend TV time with than The Miz.

The Big Show def. Erick Rowan before getting decimated by The Wyatt Family. I’m still disappointed that babyface Big Show is back. He’s so much better as a heel. But the upside is, at the rate his turns have been going, he’ll be a heel again in no time.

They’re obviously building toward a Big Show/Braun Strowman match at Fastlane. Goody goody gumdrops. I will say that it’s good to see The Wyatts looking strong again. But as wrote last week, an Undertaker/Strowman match, if that is indeed what they’re building for, is a terrible idea. Especially when there are so many superior opponents available for the Dead Man. 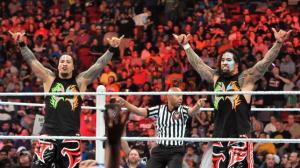 Lilian Garcia botches The Usos’ introduction, refers to them as “Grammy Award winning tag team of the year.” Okay, so Lilian botched an intro. With all due respect, it wasn’t the first time and it probably won’t be the last. And of course they made fun of her, because they’re bullies like that. But they actually took the time to replay it when they came back from a commercial break. Well, that’s one way to kill time on a three-hour broadcast. Hey, at least Vince was having fun on the headset…

On the plus side, we’ve apparently gotten The Usos away from The New Day. That’s definitely a good thing.

Kalisto def. Rusev via count-out, will defend US Title against Alberto Del Rio at Fastlane. Ugh. I was hoping they’d get the Del Rio rematch out of the way on television so Kalisto could move on to someone else. This gives WWE the opportunity to change their minds about Kalisto, and switch the belt back to Del Rio. Make no mistake about it, Del Rio does not need the US Title. But it can help build Kalisto into something they desperately need: A new star.

One thought on “Dean Ambrose and False Hope, Plus Pondering From WWE Raw”